What got the job done in a tough summer tournament 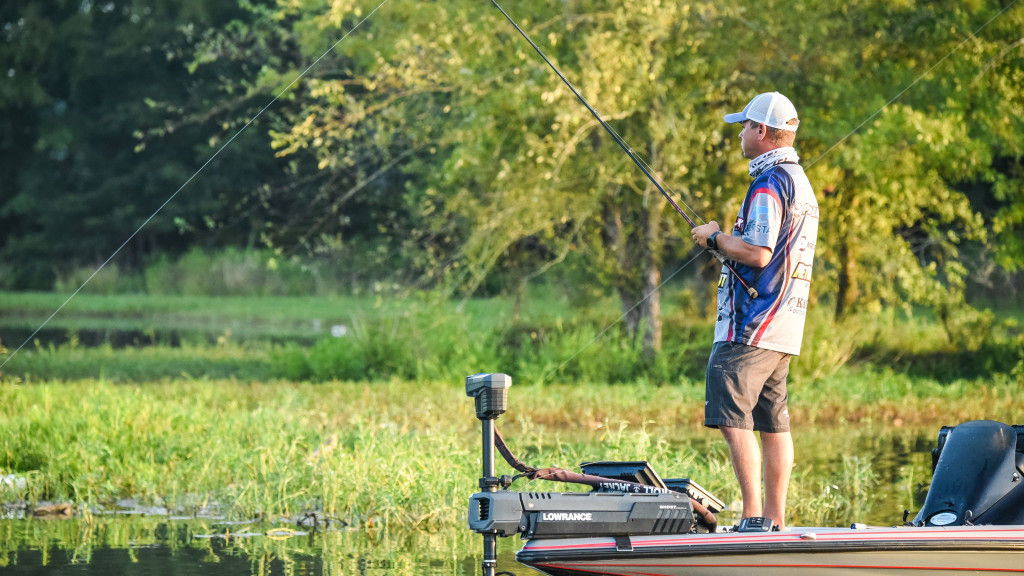 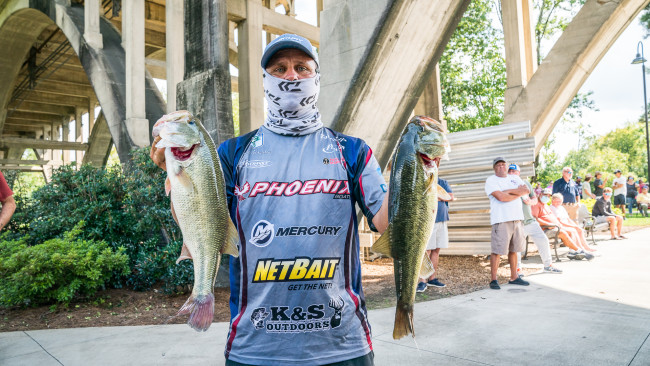 Kyle Glasgow of Guin Ala., came to Neely Henry with every intention of getting on the river and fishing for big Coosa River spotted bass. But after a couple of fruitless days fishing a river with no current, he bailed out on spotted bass and headed for the shallow grass to catch largemouth.

The move resulted in a much better latter half of the week. On the second day he weighed in 12 pounds, 12 ounces, including the big bass of 5 pounds, 1 ounce. On the final day he caught another quality fish that gave him a closing rally of 13 pounds.

“The only upside to having no current was the lake was at full pool and stayed that way during the week,” Glasgow says. “That kept plenty of water up in the bank grass. Instead of going way back in the creeks, I focused on deeper grass (in 18- to 24-inches of water) in the mouths of creeks closer to the main river.”

Glasgow found his best success around a mixture of grass and docks. He covered water with a ¼-ounce buzzbait and a Z-Man Evergreen ChatterBait Jack Hammer teamed with a Yamamoto Zako trailer. He then slowed down around docks, pitching a Berkley PowerBait Power Hawg to the pilings and the grass on either side of the dock.

“It seemed like if you got a lure in front of one, it bit – it’s not like you had to tease them into biting,” he adds. “Once I realized that I picked up the pace and started covering water faster, which might have helped me get a few more bites as well.” 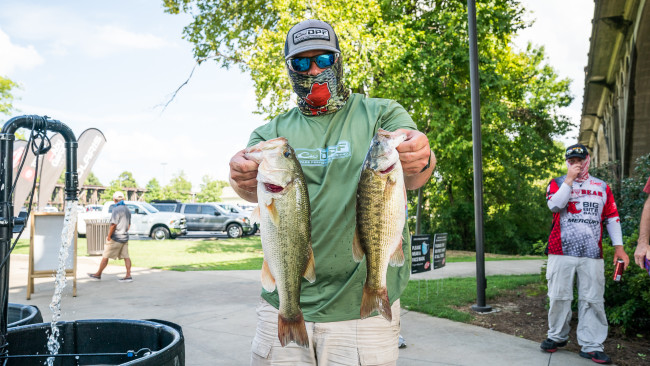 Local pro Hunter Hayes of Gadsden, Ala., made the most of a willow fly hatch going on in the midlake region of Neely Henry. During the morning hours he targeted overhanging trees that provided shade and refuge to the hatching flies, which the bream were popping on regularly.

“Contacting the cover was key to getting bites on the buzzbait,” Hayes says. “The bait needed to hit the targeted object: rip rap, seawall, laydown log, dock piling or submerged branch from an overhanging tree. As long as I got my cast close to the target, the bait would track right or left towards the object and I could control the angle of contact with my rod.”

Hayes’ pushed his buzzer bite as late into the morning as he possibly could. Once the sun got up high and the shade disappeared, he ran laydowns along the river with a ½-ounce spinnerbait. 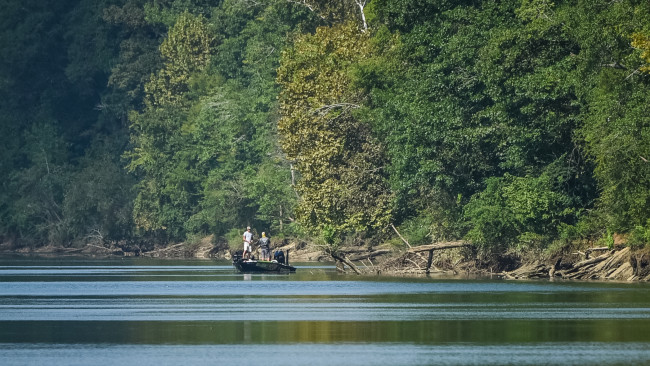 4. Johnson runs up the Coosa

Andrew Johnson of Glencoe, Ala., made long runs up the Coosa River to capitalize on a short window of current each day.

Johnson spent the first 5 hours each day pitching a 5/8-ounce homemade jig to stagnant laydowns in the river hoping to get a couple of “bonus fish” before the water came on.

“I wanted to do something else the first part of the day, but I had to be right in the juice when the current started to maximize my window,” Johnson explains. “So I was just up there waiting out the generation schedule.”

Once the current did start rolling, shad would bunch around the eddies of laydowns and Johnson could go to work with a white ½-ounce Z-Man ChatterBait Custom paired with a Reaction Innovations Little Dipper , catching bass ambushing the shad. 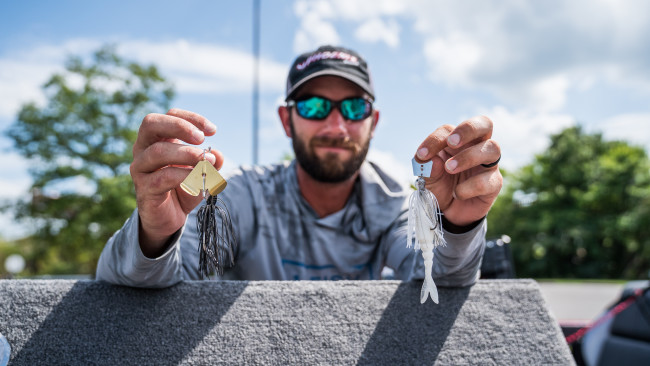 Josh Butler of Hayden, Ala., found grass fish at Neely Henry to be “unicorns” and instead had to turn to hitting “hard stuff” like rock and wood to get bit. With that, Butler went all in on the junk fishing game, staying on the move with a ¼-ounce buzzbait and a 3/8-ounce Z-Man Evergreen ChatterBait Jack Hammer fishing whatever got in his way. 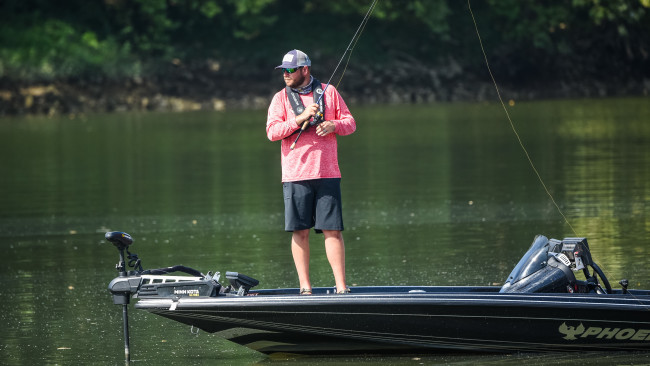 Each day of the event Derek Hicks of Rock Face, Ga., committed to a 30-mile run up the Coosa River to the Weiss Lake Dam tailrace. Even though there was no current coming out of the dam, the residual seepage from Weiss kept the water some 5 to 6 degrees cooler at the dam site.

“I was determined to catch those spots up there, even without current,” Hicks says. “I know all those big spots don’t leave that area just because there is no current. They just mill around up there waiting for the current to kick on.”

Hick’s commitment paid off the first two days when he fooled limits from the dam, which put him in second place by just 11 ounces going into the final day. But on the third day, Hicks’ dam tricks didn’t work and he brought just three keepers to the scales. His key lure around the dam area was a 3/16-ounce War Eagle Shakey Head Jig teamed with a Zoom Trick Worm. Hicks noted a key part of catching the finicky spotted bass was the use of bright orange 20-pound-test braid main line on his spinning reel.

“That bright line allowed me to see when I got a bite,” he says. “Those spots wouldn’t hold that bait long; I needed to see that ‘tick’ in the line on the fall to catch up to them with a hookset before they dropped it.”

Hicks also caught a couple of key fish from laydowns along the river on a 5/8-ounce brown jig during his return to the ramp. 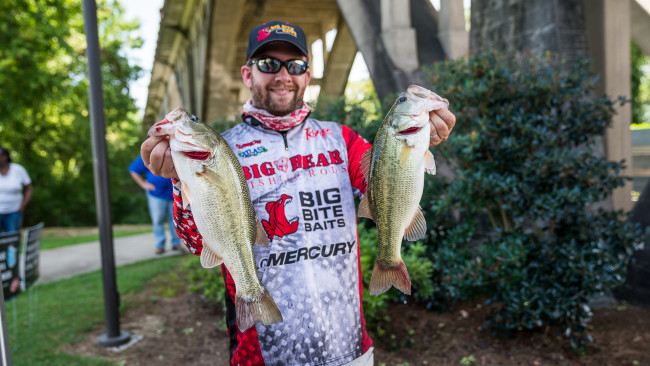 Clabion Johns’ strategy at Neely Henry was to go shallow, then go shallower. He would idle as far back into a creek as he could go and then apply a two-prong approach.

“I was fishing the really shallow deltas in the back ends of the creeks, sometimes grinding bottom with the trolling motor just to get to them,” Johns says. “I’d fish the super-shallow grass with a SPRO Bronzeye Poppin' Frog, which produced my better fish.”

Once back in the creeks, Johns also hunted for the tiniest ditches he could find that were drains into the delta area.

“I wasn’t fishing the main creek channel, but rather the little rock-lined ditches that emptied into the area,” he described. “Even if a ditch just had two feet of water in it, it held fish.”

To fish the ditches, Johns pitched a Big Bite Baits Fighting Frog on a ¼-ounce weight. 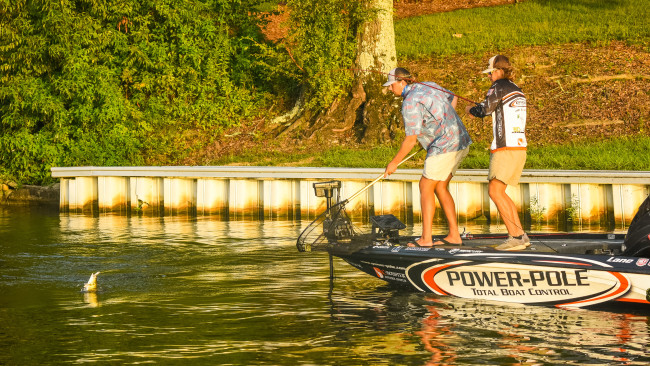 8. Lane lobbed a Plopper in the shade

Cal Lane of Guntersville, Ala., caught 90 percent of his fish on the week running a topwater pattern up and down the mid-lake’s shoreline cover.

“I mostly ran shade with a River2Sea Whopper Plopper,” Lane says. “It didn’t really matter what it was – docks, trees, logs, seawalls, anything that cast a shadow was fair game.”

Missed strikes on the topwater were often followed with a cast from a shaky head, which worked a couple of times in converting his bites into a keepers 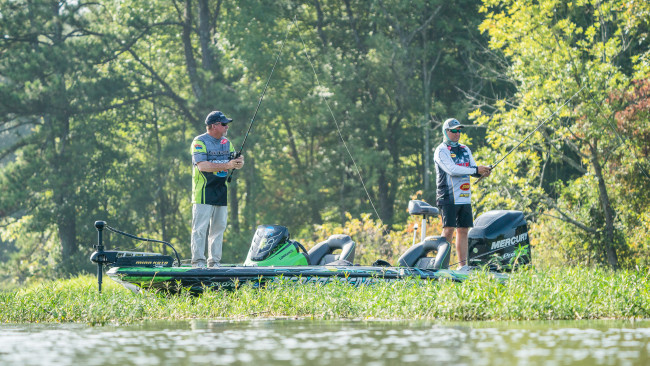 With his finish at Neely Henry, well-known Gadsden, Ala., pro Terry Tucker posted his 59th top-10 finish in FLW competition. Due to his knowledge of the lake, Tucker was a favorite going into the event. He kept pace to make the top 10 after two days, then gambled on a home run spot on the final day and came up short.

Tucker employed a one-two punch in his home lake’s grass beds, swimming a white jig in the more scattered grass islands and then idling way back into creeks and backwaters to punch matted grass with a  Zoom Ultra Vibe Speed Craw on ¾- and 1 1/4-ounce tungsten weights.

“They didn’t run much current this week, but they did keep the lake level up to nearly full pool for a few days,” Tucker says. “When the water stays flush up in the grass like that, the fish will move into it and use it, but they can be pretty scattered. I knew it would be tough and I figured if I could just get six or seven keeper bites a day, I’d be in it on the last day, then I could gamble on a big bag spot.” 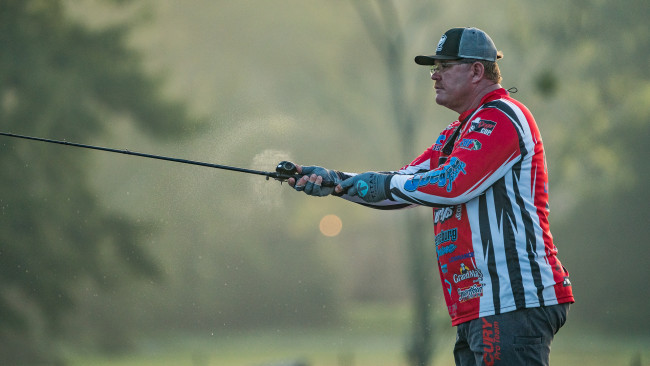 Scott Towry of Lawrenceburg, Tenn., was one of the only pros in the top 10 to make the offshore bite work for him, despite a lack of current. On the second day he caught a majority of his 12 pounds, 8 ounces dragging a 5/16-ounce jig on offshore gravel bars in about 6 feet of water.

“When they finally kicked on the current the second day, it worked,” says Towry of his offshore bite. “I got bites the final day fishing offshore, but the fish just wouldn’t hold on to it and I could never get hooked up with them.”

When he wasn’t fishing current, Towry killed time flipping a Reaction Innovations Sweet Beaver in grass, which produced a few keepers for him as well.