Burton Edges Ahead at the Detroit River

Dobson just an ounce back in second place 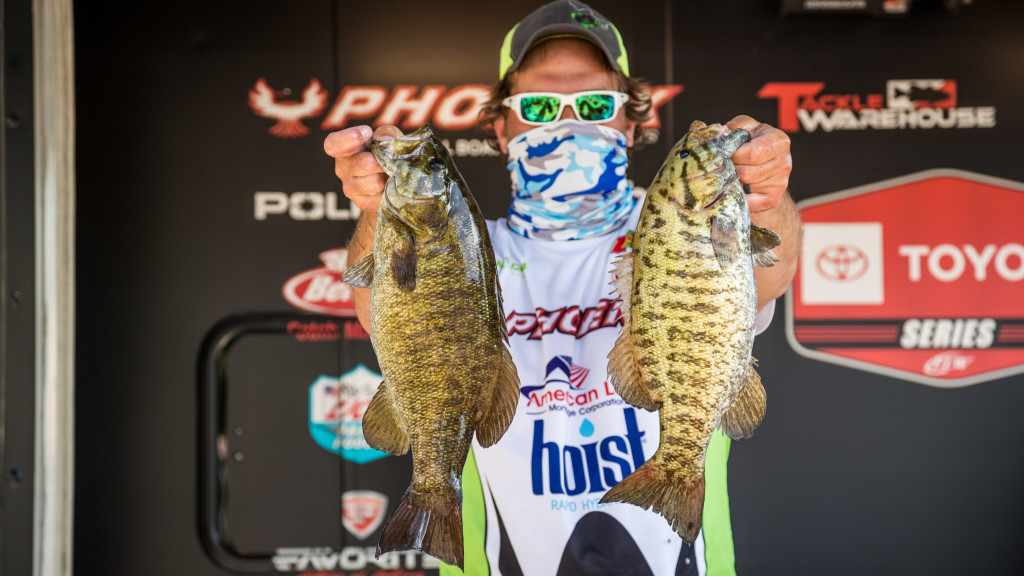 Day two of the Toyota Series Northern Division event on the Detroit River saw the pros stuck in the river itself again due to the wind. Moving up from fourth place into the lead, Wilson Burton weighed 20 pounds, 4 ounces to get up to a 40-11 total. With the only 20-pound bag of the day, Burton slipped past Scott Dobson by just one ounce, who sits behind him with a 40-10 total. Tomorrow, with the wind moderating, it looks like the pros will have the run of Lake St. Clair and Lake Erie, so you can expect an interesting shootout to finish things off. 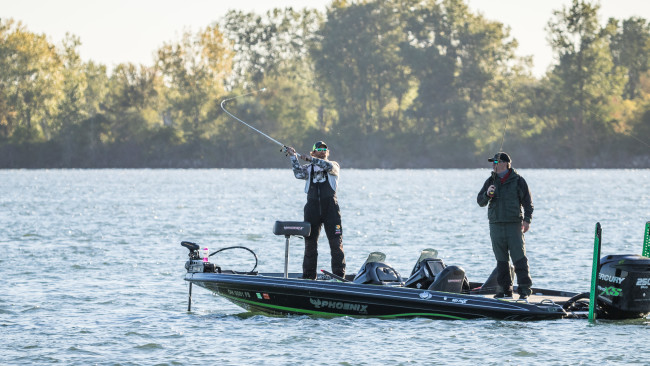 Doing most of his damage off one spot in the Detroit River, Burton is very much doing his own thing, even if he doesn’t have the water to himself.

“I’m just throwing a crankbait really, really long,” says Burton. “After two days, a lot of guys have come up and are trying it, but they’re not catching them. I’m throwing it as far as I can, and I’m reeling as fast as I can, that’s the key. Everybody else is drifting a tube and throwing a drop-shot, and I’m showing them something different.”

Today, Burton caught one and lost one right off the bat, and then had to regroup.

“I left, I went south, way south, to the mouth of Erie,” says Burton. “I caught a limit, and once I got my limit I went back up. I’m hoping tomorrow that no locals are there, and if they open the lake everybody runs and I’ll have it to myself.”

Fishing a drop-shot and an umbrella rig for his limit, Burton says he culled all but one of his southern fish on the crankbait in the afternoon.

Tomorrow, in addition to the challenge of fending off Dobson, Burton thinks he needs to play the river a bit. Because the current is so strong where he’s fishing, he can’t sit on it all day. So, he’s considering breaking his day up a bit and fishing in or around the mouth of Erie in less current to save his batteries. Whether all the gory details end up in tomorrow’s winner story or in 'top 10 patterns,' Burton has put together a very interesting tournament. 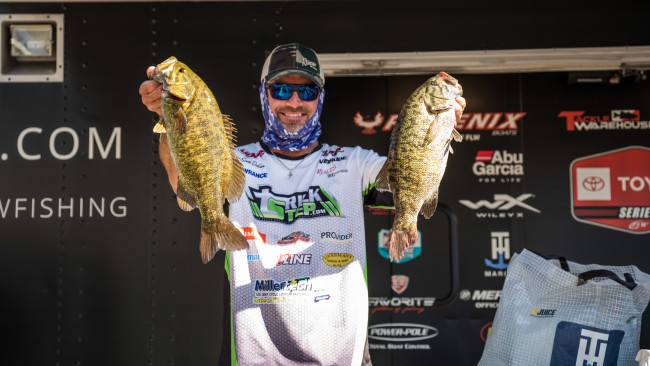 There’s probably no more dangerous man when it comes to smallmouths than Dobson, and he proved it again today, notching 19-12 to stay in second place.

“I went on a different rotation today, I went south and then went north,” says Dobson. “Yesterday I went north and then worked south. I caught one off the git on a jerkbait, and then nothing. Then, I ran out to a flat, and there hadn’t been any fish there, but I caught about a 4-pounder there on an a-rig. Then there was about a 2-hour lull, and I caught three in a row on the a-rig.”

Mostly fishing places where the current hits the face of a point or break, Dobson is doing it all with moving baits. Today, he caught fish on an umbrella rig, jerkbait and spinnerbait.

Tomorrow, he’s leaning toward going for the gusto. 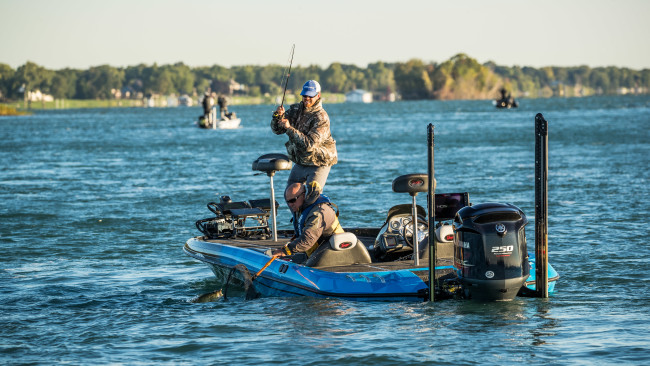 Troy Stokes is once again in position to win a Northern Division event, but this time he’s the hunter. After tallying only 17-14 today, he’s still in easy striking distance of the leaders.

“It was pretty tough, actually,” says Stokes of his day. “It started fast, I had three that were over 3 pounds in like the first hour. So, I felt pretty good about it. I started hitting other spots, and the water was dirty on it, and they weren’t set up on spots I caught them yesterday.”

Eventually, Stokes scrounged up a half dozen keepers on a drop-shot, but actually went largemouth fishing some today because the river was so tough.

Tomorrow is a new day, and he’ll have a lot more room to work. 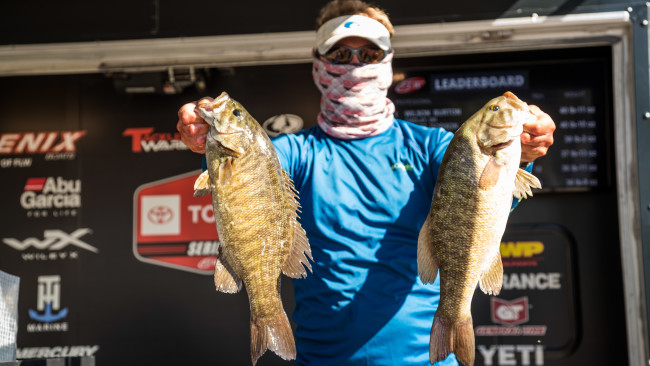 Mixing up shallow and deep, Kolodzaike managed to put together 18-3 to hang in the top five.

After starting out deep with little success, Kolodzaike made an adjustment that keyed his day.

“I ran up to one of my shallow spots and started throwing a lipless, and they were loaded up there pretty good,” says Kolodzaike. “Not a lot of big ones, but a bunch of 2- and 3-pounders.”

Throwing an XCalibur Xr50 through sand and grass patches, Kolodzaike put together a limit that included his biggest fish of the day. Though he caught some on a Ned rig and out deeper later, the shallow, moving bait strategy did the bulk of his damage.

Tomorrow, Kolodzaike plans to start in the river and then dash up to St. Clair. 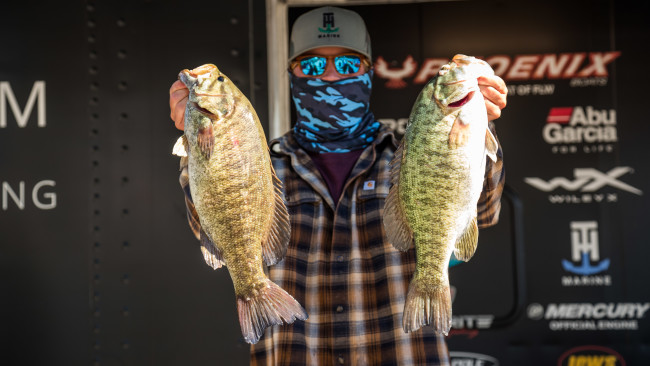 Serafin is in the process of locking up the Strike King Angler of the Year title (it still depends on day three), and made a big comeback today with 19-14, which was the second biggest bag of the day.

So, Serafin moved up the river, found his primary target occupied and had to adjust.

“I pulled off to a spot I haven’t fished all week, and graphed it and graphed a nice boulder patch,” says Serafin. “So, I made one drift over it and caught three. So, I just drifted it for the next two hours and culled by ounces every pass.”

Catching his fish deep, in 22 to 25 feet, Serafin did his damage with a drop-shot today. When he’s shallow, he’s been throwing a spinnerbait. Tomorrow, he’s planning on beig part of the Erie crew.

“I’m gonna start on that spot in the river, but I plan on heading out toward Erie,” says Serafin. "I’ve got some stuff in Erie I wanna hit.” 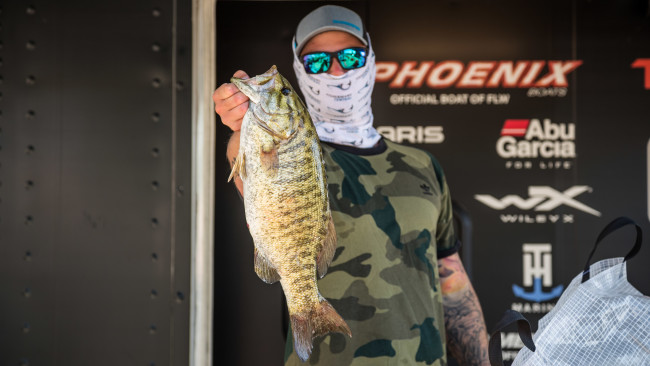 Typically traveling with Tackle Warehouse Pro Circuit pro AJ Slegona, Rod MacKinnon put 19-7 on deck on day two and rocketed into the lead on the co-angler side.

“It’s hard to put two strong days together as a co-angler,” says MacKinnon. “I’ve got really lucky this week so far with my draws, and I’ve fished really clean.”

MacKinnon says aside from losing one good one on day one, it’s all gone to plan. Now, he’s made the first top 10 cut of his career and he’s even got a secret bait on his side.

“I’m throwing a ½-ounce jig, a lot of people aren’t throwing bottom baits, they’re throwing shad-tyle baits or a drop-shot,” says MacKinnon. “I’ve been dragging that, with a homemade craw my 14-year-old cousin made. I told him I’d use ‘em and here we are.”