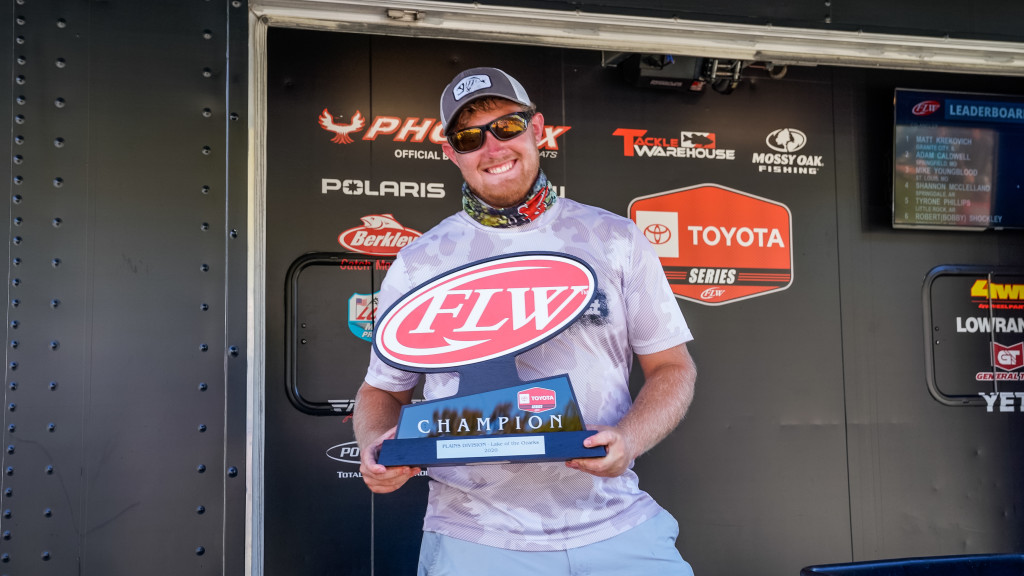 Then again, most around the historic lake already knew that.

While his FLW tournament history coming into the Toyota Series Plains Division event was as unassuming as he is – three Phoenix Bass Fishing League events in three years and $284 in career earnings – the 20-year-old and his father, Roger, have been winning numerous local tournaments in the area the last several years. They even won the Ozark Mountain Team Trail Championship last fall.

But this week, Cook finally showcased his abilities to the greater fishing world. He cracked 23 pounds, 9 ounces the first day to jump out to a 6-pound lead, and he never looked back, even overcoming some horrible luck today to bring in 11 pounds. It wasn’t a big weight, but it was enough to get him to a 49-13 total and hold off a hard-charging Jeremy Lawyer and a loaded top 10 to take home the title. 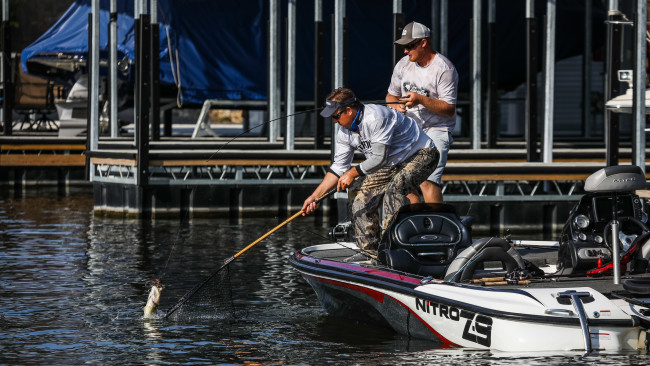 “This is crazy,” says Cook. “Last year we won that boat, and that was the biggest thing. And I’ll never forget that, because it was with my dad. It’s super special. But to get this, man, this is super awesome. It’s what I always dreamed of.”

Of course, that dream was nearly a nightmare to start today.

The moment they announced his name to takeoff, his motor stopped working as he went to pull away from the dock. Fortunately, he was able to swap into another boat, but his luck really never turned around much, from only catching three keepers by midday to a lost big fish to even making a few-mile run to hit one dock only to have two guys stomp across it while he was fishing it.

Basically, if it could go wrong for him, it did. Fortunately, he had a goal and stuck to it.

“There was definitely a moment or two this morning where I thought, ‘man, it’s just not my day,’” says Cook. “But I tried to keep my mind positive. I knew I just needed five good keeper bites because it’s usually tougher on Saturday.”

Well, he got seven and landed six keepers, which was more than enough. 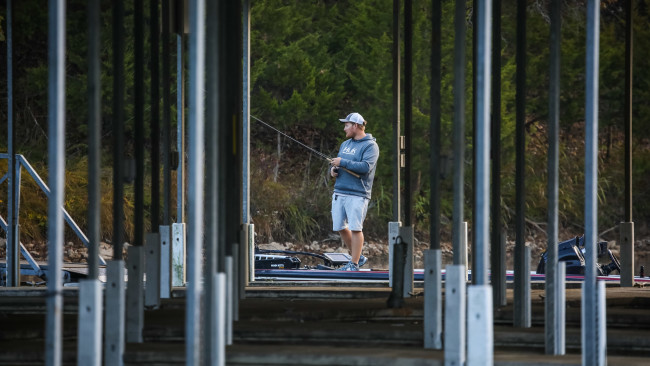 And for all the locals wondering what special thing he’s been doing to be so successful – a major topic of conversation throughout the event, with many speculating he had a secret lure or technique – here’s the big secret: It’s nothing special.

Cook spent most the year sinking brush piles around docks for this event in the Grand Glaize area, though he didn’t even bother to mark them other than in his memory. He admits some are “a little tucked up” in out-of-the-way places, but he also says only one in every five piles he sinks is any good, with less than 20 producing fish for him this event. And as for lures, he only uses two rods with a small tackle box full of homemade green pumpkin football jigs with matching Zoom Super Speed Craw trailers. That’s it.

“That’s just what we do,” says Cook, who benefited from his memory and simple tackle options when he quickly switched boats this morning. “It keeps it simple. You’re not switching back and forth between a hundred things throughout the day. We have two colors: green and brown, but brown wasn’t as good this week. But if you put it in front of the right one he’s going to bite it.”