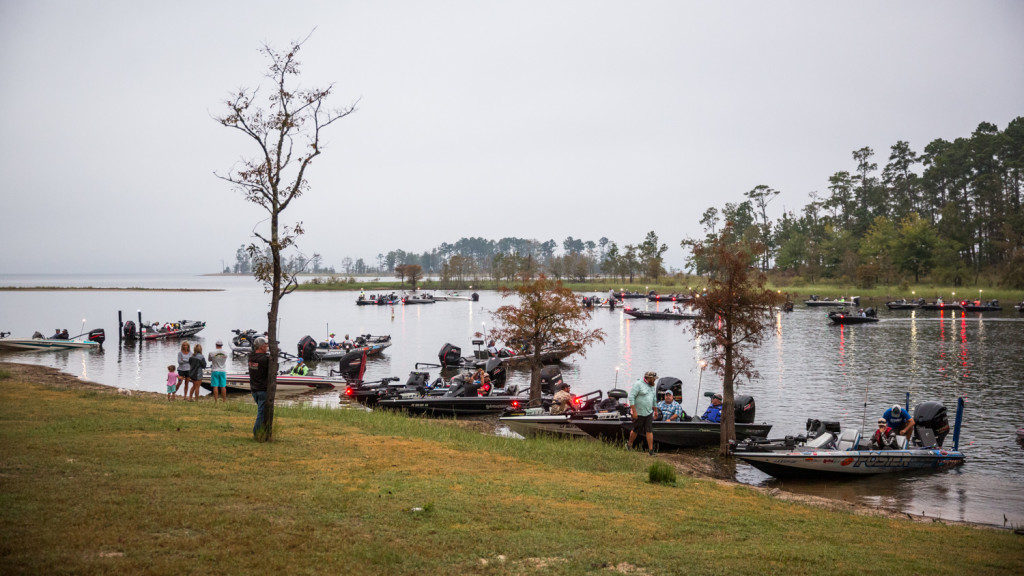 Takeoff for day one of the Toyota Series Southwestern Division finale on Sam Rayburn was about as perfect as it gets. Light wind paired with cool, comfortable temperatures and a light overcast provided an auspicious beginning to the Toyota Series event on the sprawling Texas reservoir. 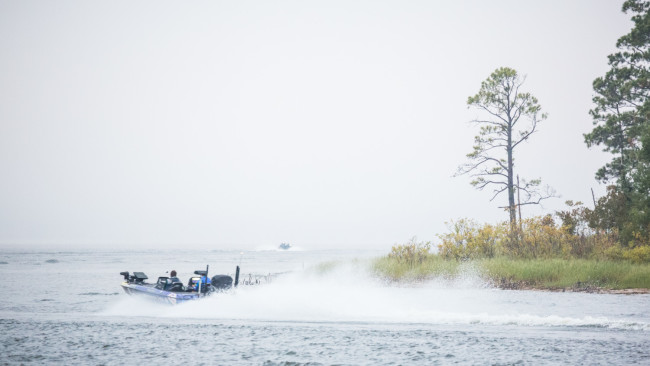 Sam Rayburn has a reputation as a phenomenal bass fishery and a giant in the tournament world. At more than 114,000 acres, it’s the largest reservoir contained entirely within the borders of the Lone Star State. The Angelina River feeds Rayburn, which sprawls out into a typical Texas lowland impoundment that features timber, brush, bushes, submerged hydrilla, plenty of emergent and bank vegetation.

The lake is a flood-control impoundment, so it does experience high- and low-water years, fluctuating roughly 7 feet throughout a typical season. Currently, the lake is about 86 percent full, which is pretty standard for October.

Rayburn is an easy 20-plus-pound lake, where limits that weigh in the upper 20s are common, and 8- to 10-pound bass frequently make it to weigh-ins. This time of year, that’s going to be harder for anglers to produce, but the potential is still there. 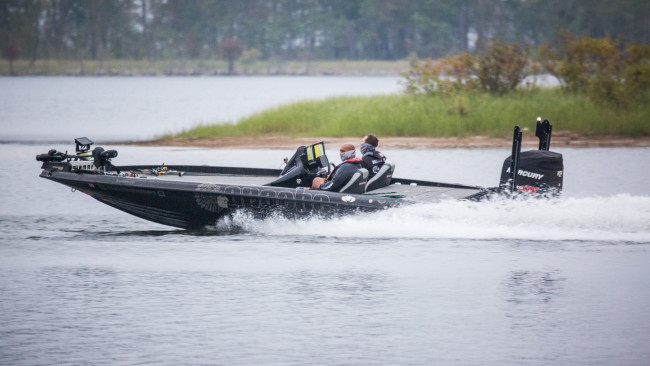 Though Rayburn is still one of the premier lakes in the country, it’s been pressured a lot the last few years and the fall isn’t always an easy time to fish it. The recent Phoenix Bass Fishing League (BFL) Cowboy Division Super-Tournament is a decent example of how tough the bite might be. In that event, Shane Williams won with 30 pounds, 2 ounces over two days. Williams fished shallow, which is notable in itself – most of the really famous days on Rayburn come off the bank. Behind Williams, it was tough, with a number of boaters in the top 10 failing to weigh a limit at least one of the days.

The reports from practice also have the fishing pretty tough. Darold Gleason, a Tackle Warehouse Pro Circuit pro, made the top 12 in the recent Bassmaster Open on Rayburn.

“It’s brutal, y’all gotta get sick of us crying about how tough every event is, but it’s tough, it’s a snuggle struggle,” says Gleason. “I’ve tried it all, I’m probably going to have to mix it up on tournament day. It’s going to be very similar to what the BFL Super Tournament was a couple weeks ago. It’s tougher than when I fished the Open for sure.”

Todd Castledine, who has four FLW wins on Rayburn, agrees that the fishing isn’t easy.

“It’s real tough, it’s been tough all year,” says Castledine. “It’s been off all year, which is weird. There’s two things going on in my opinion. We’ve had an incredible amount of pressure down here, way more than normal. And the other deal is, there’s more shad in the lake than I’ve ever seen, which is semi-rare. There’s a group [of bass] that always follows the shad, but this year it seems like 90 percent of the fish are following the shad.”

Castledine says the problem with there being so many shad is that it’s hard to make the fish bite consistently.

“It’s almost like schooling fish,” says the Texas pro. “When they’re eating the shad, you can catch them, but you might not be able to catch them for another eight hours until they feed again”

Castledine says there’s one other factor worth watching – a cool and wet front is set to roll over the lake on day two. Bringing strong winds and overnight rain, it’s almost a guarantee that the conditions will be a lot different tomorrow.

“Friday is the kicker, I planned on that, I practiced for that,” says Castledine. “They’re gonna eat Friday. If it happens, the weights are going to be either way bad, or way better than Thursday. I personally, love, love, love, fronts this time of year, I think it’s going to be good.” 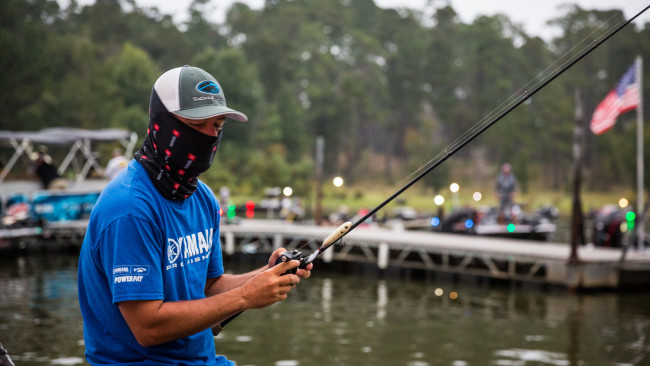 With deep and shallow fish on the menu, plus lots of cover options, you can expect the whole tackle box to be on the table.

“Pretty much everyone is fishing grass and pads or brush out deep,” says Gleason. “If someone finds something in the middle in between they could be very dangerous.

“Shallow, there is tons of hydrilla, and also quite a bit of lily pads,” says Gleason. “The main thing out deep is brush piles, mostly man-made brush piles, but there are some natural trees that guys will take advantage of too. It seems like every time I find a group deep that’s not related to brush, it’s usually a hard spot, I think that draws the bait, but it’s almost like running brush piles. If somebody runs enough of them, it makes you look real smart when it works.”

For the deep stuff, expect to see big crankbaits, swimbaits, worms and Carolina rigs. Texas is the home of offshore power fishing, so the chances of seeing someone dialed with a drop-shot are less than you’d see elsewhere.

If someone runs into some shad-focused bass, anything from a jigging spoon to a swimbait could clean up. It’s a wild card that has some precedent on Rayburn and is actually how Cody Huff won the season-opener back in January on Toledo Bend.

For the shallow fish, a whole gamut of baits can work. Topwaters, wake baits and spinnerbaits can work on grass edges. A frog or a soft plastic could work in the pads. Additionally, with as much thick vegetation as there is, someone could pick up a big weight and punch up a big bag. 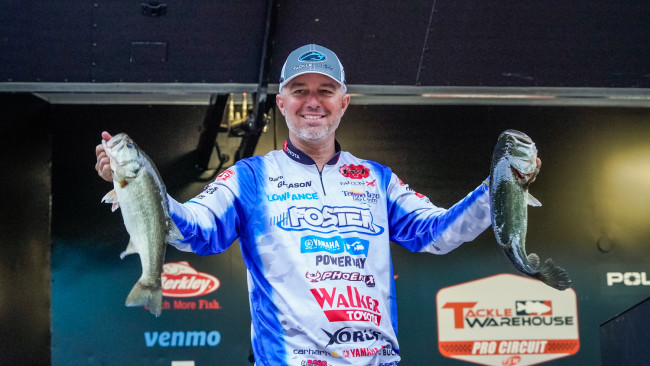 With the fishing as tough as it has been, the weight predictions are sadly lackluster for Rayburn. Gleason thinks about 54 pounds is the weight to shoot for, and Castledine largely agrees.

Other than the weights, it’s going to be interesting to see how the fish are being caught.

“I think of the top 10, there will be more shallow than deep,” says Gleason. “I think more checks will come shallow than deep, but I’d put a lot of money down that it’s going to be won deep by somebody.  Shallow, I think like a 16- or 17-pound bag is awesome, but deep, somebody could make one stop and catch two 8-pounders.”

So, we’ll see how it shakes out. We’re sure to see a few Texas-sized bass, but other than that it’s a bit of a mystery how the week is going to go.