Spoons and drop-shots got the call for tricky fall fish 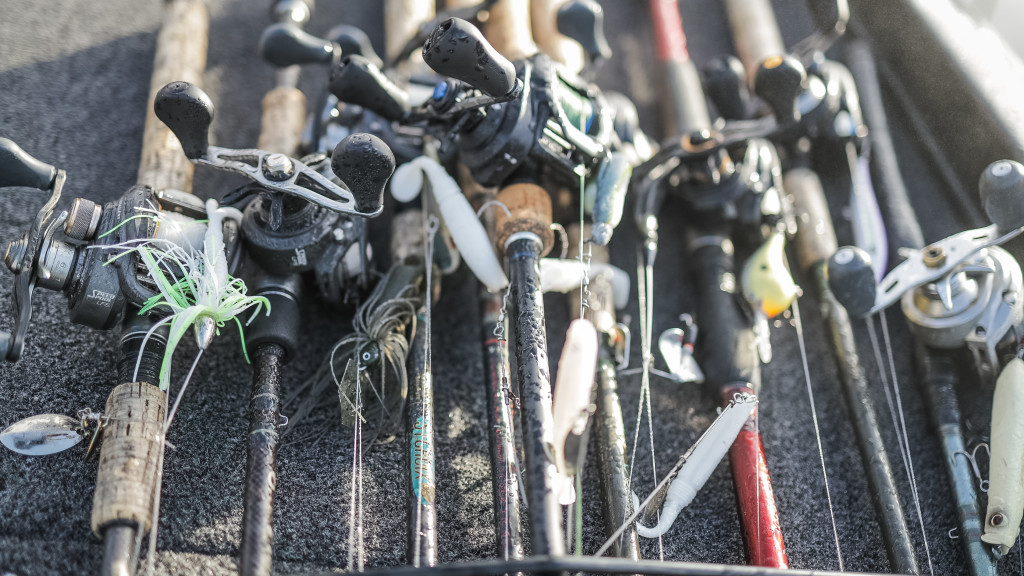 While Dale Hollow really featured a hodgepodge of different baits in the Toyota Series Central Division finale, the anglers who performed the best did so by targeting deeper fish that were either chasing bait or sitting on isolated cover. For the job, much of the field had a spoon and a drop-shot on deck.

Still, there were plenty of other offerings to go around. Here’s a look at the lures each member of the top 10 used to catch their fish. 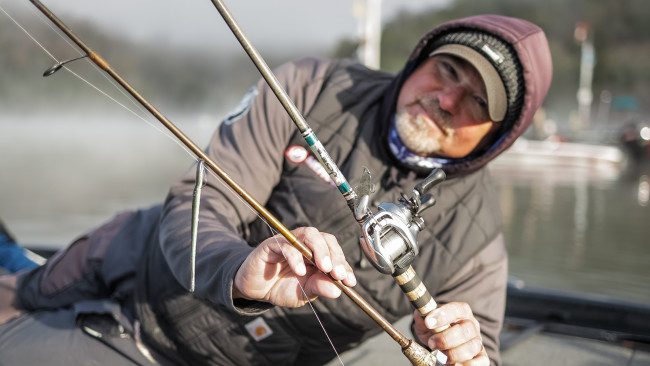 1. A drop-shot and a blade bait were about all Adam Wagner needed to secure the win. His drop-shot bait of choice, like most everyone else, was a 6-inch Roboworm Straight Tail Worm. For his vertical bait, Wagner employed the local favorite 5/8-ounce Silver Buddy rigged on 10-pound-test Berkley Trilene 100 Percent Fluorocarbon. 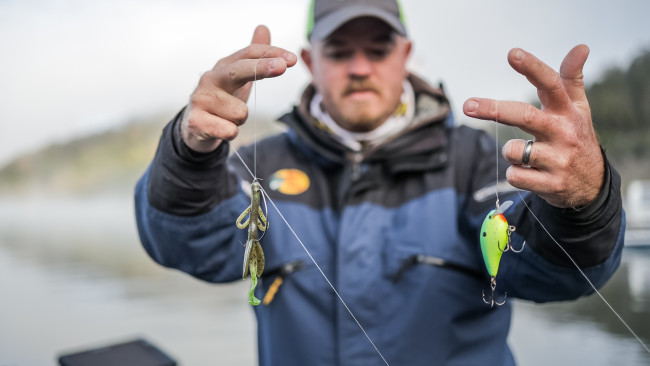 2. Most of Blake Smith’s keepers came cranking a Strike King 1.5 square-bill. On day three, he turned to a custom-made umbrella rig with homemade swimbaits and a Texas-rigged Zoom Brush Hog (green pumpkin with a chartreuse tail) on a 4/0 Owner hook with a 3/8-ounce tungsten weight to target fish in his school that had scattered out a bit overnight. 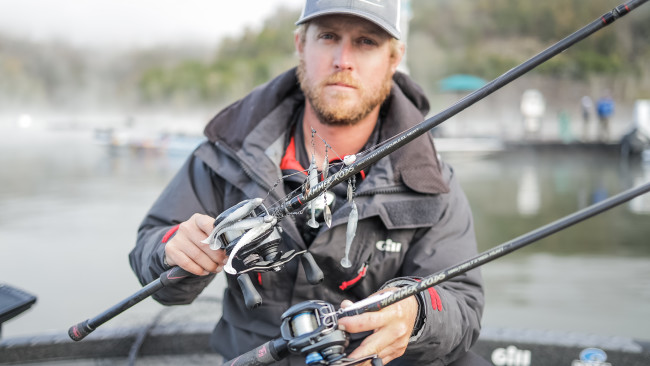 3. With the everchanging weather conditions throughout the week, Dakota Ebare had to mix up his bait selection. He did some damage with a Cotton Cordell Jigging Spoon rigged on a 7-foot, 3-inch medium-heavy Hammer rod and a Picasso HD Bait Ball Umbrella Rig tipped with Big Bite Baits Finesse Swimmers, which he threw on a 7-foot, 11-inch double extra heavy Hammer rod. Both were paired with Shimano reels. On day three, he also mixed in a drop-shot to catch a few key keepers out of deep water. 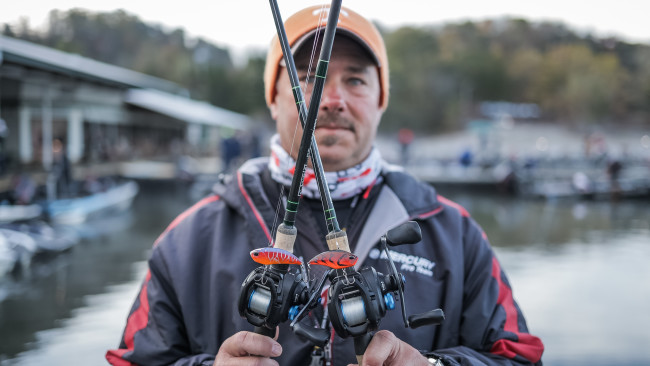 4. After working with several baits in practice, Jonathan Bowling ultimately settled on a pair of Duo Realis lipless crankbaits (the Vibration Nitro and Apex Vibe) to do most of his damage. He threw those on high-speed reels and 7-foot, 6-inch medium-power, moderate-action rods with 12-pound-test fluorocarbon line, down from his usual 17-pound-test because of the water clarity. 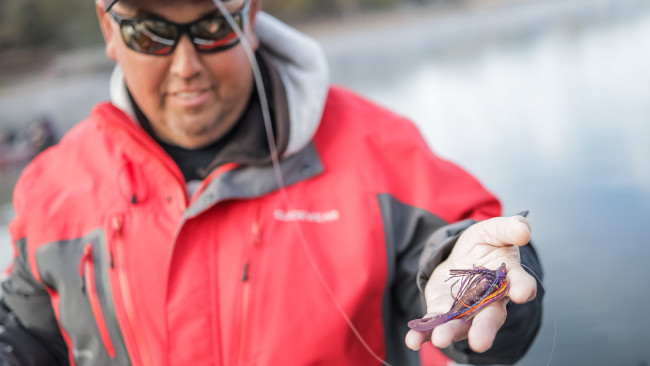 5. No one type of cover was ideal for Chris Malone’s 5/16-ounce Dirty Jigs Swim Jig – just whatever looked good. He threw that on a 7-foot, 1-inch G. Loomis IMX Pro rod paired with a Shimano Curado reel and 17-pound-test Seaguar InvizX line. He also used a custom 3/8-ounce vibrating jig and a drop-shot with a 6-inch Roboworm Straight Tail Worm. 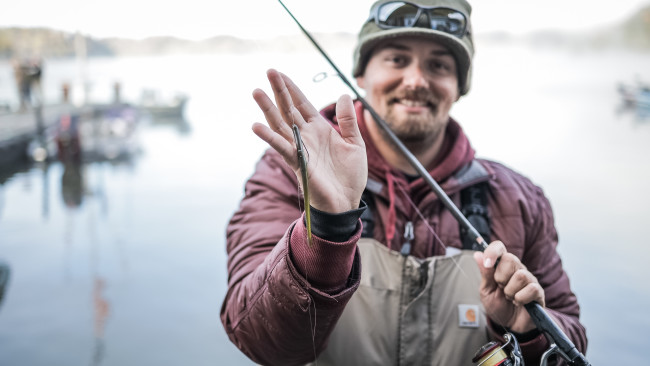 6. With finicky fish in his sights, Nick Ratliff leaned on a drop-shot consisting of a 6-inch Roboworm Straight Tail Worm in various colors rigged on either a No. 1 or No. 2 Owner Cover Shot Worm Hook with either a 3/16- or 1/4-ounce weight depending on the wind. He also weighed in a few fish on a spoon. 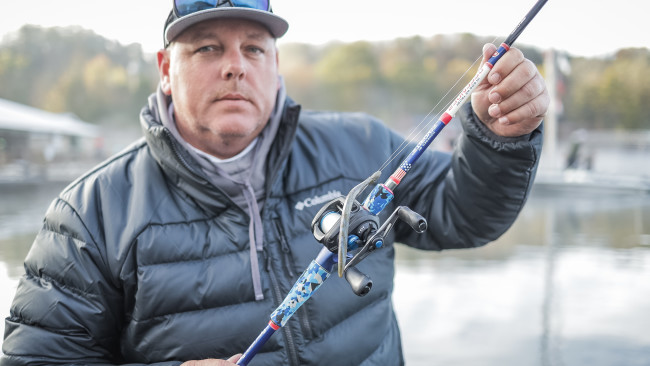 7. Scott Stults stuck with the 5-inch Strike King Ocho (green pumpkin blue flake) with a 5/16-ounce weight to ride out the week for a top-10 finish. He rigged that on a Favorite Defender rod and Shimano SLX DC reel spooled with 15-pound-test Seaguar fluorocarbon. Stults also mixed in a jig made by his son, who owns and operates Jaw Breaker Lures. 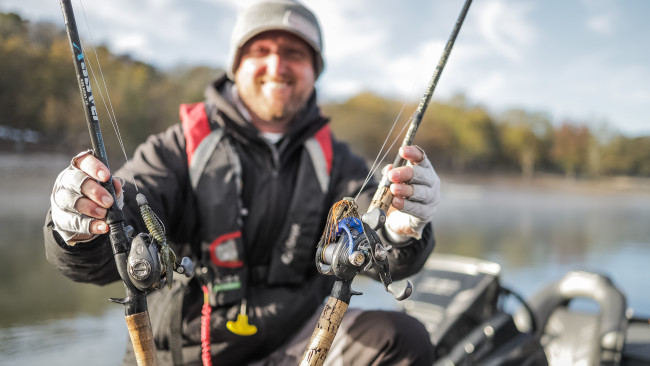 8. To catch his fish this week, Drew Boggs relied on a Bandit Rackit Squarebill, a jig and a Reaction Innovations Sweet Beaver (green pumpkin) with a 3/8-ounce Jenko Creature Weight. 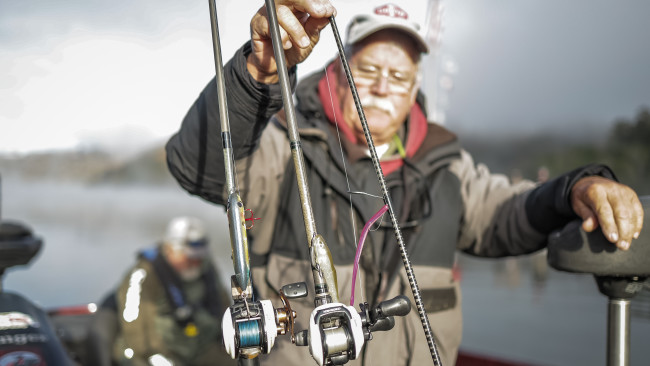 9. Three baits got the call for Marshall Deakins this week: a 4-inch Scottsboro Tackle Swimbait, a drop-shot with a Roboworm Straight Tail Worm and a 1/4-ounce weight and a walking bait. 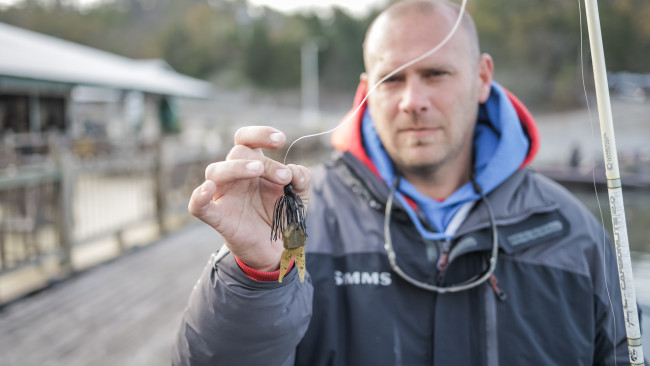 10. Billy Hall leaned on a War Eagle Spinnerbait with two willow blades to target shallow fish in the Wolf River. When he needed a follow-up bait, Hall turned to a flipping jig (black) with a Zoom Big Salty Chunk trailer (green pumpkin).