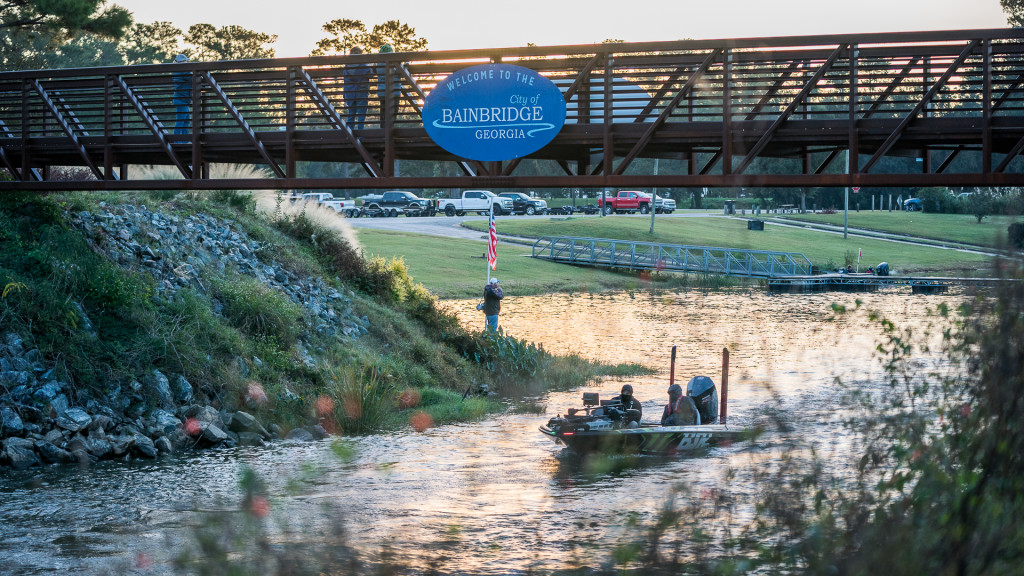 The Toyota Series Southern Division is wrapping its 2020 season with the third and final stop at Lake Seminole out of Bainbridge, Ga., this morning. Lake Seminole is normally a springtime venue for the Toyota Series but was rescheduled for the first week in November this year. While most anglers would prefer to fish the remote Southwest Georgia impoundment in the spring, the fall months are not a bad time to visit the lake either.

With hunting seasons in full swing in the South, the fishing pressure subsides on Seminole this time of year, making for some good fishing. The fall transition at Seminole involves grass mats dying back with cooler weather and the shad schooling up tight along the declining grass edges.

With the final event in the Southern Division, the Strike King Angler of the Year will be named at the event’s conclusion on Saturday afternoon and the top 25 pros and co-anglers in points will be invited to the Toyota Series Championship on Lake Cumberland this December.

Currently, Mark Blevins of Palatka, Fla., is leading the Southern Division points race after two events with 498 points. Behind him are Trevor Fitzgerald of Belleview, Fla., with 492 points and Jacopo Gallelli of Florence, Italy who has tallied 481 points. 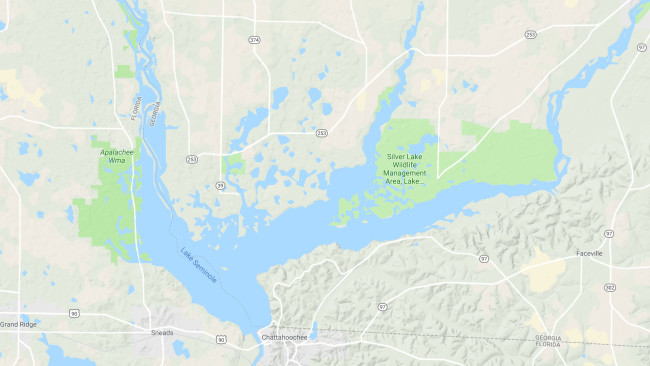 Lake Seminole is a 37,500-acre impoundment located in the very far corner of Southwest Georgia. Boasting an average depth of 10 feet due its expansive shallow flats, Seminole is considered to be a lowland impoundment. The lake is fed by two of the South’s iconic rivers: the Chattahoochee and the Flint. The rivers converge at Jim Woodruff Dam to form Seminole before going through the dam and flowing south as the Apalachicola River.

Lake Seminole is famous for its lush grass beds, mostly consisting of thick, matted hydrilla. Some anglers say Seminole is similar to Sam Rayburn in Texas or Lake Guntersville in Alabama in the way the grass on flats run out to river and creek channels, creating bass-rich edges. In addition, Seminole is loaded with standing timber in the Spring Creek basin. The twisting, winding Spring Creek channel is some 30 feet deep and looks like a flooded forest. The timber is so thick, the entire length of the Spring Creek arm must be run in a timbered boat lane for safe navigation. Other than the boat roads, idling is a must in all of Spring Creek. 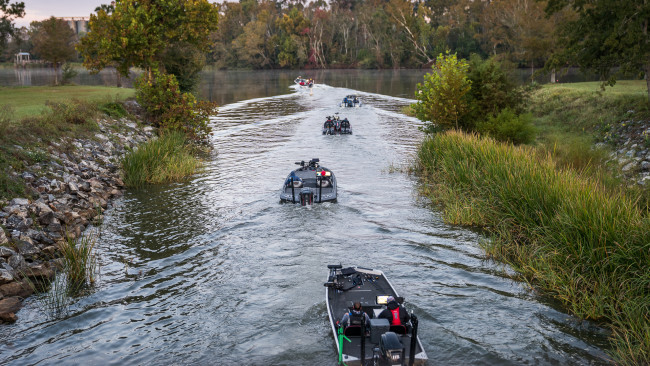 Over the summer, Seminole experienced some heavy flows due to tropical systems tracking over Georgia. Also, the water level on the Chattahoochee side of the lake has been a foot or two higher than normal due to dam repairs at the Walter F. George Dam on Lake Eufaula. The Flint and Spring Creek sections of the lake have stabilized; the rivers are still running stained, but Spring Creek has cleared up.

After a very warm October, Lake Seminole’s grass beds are in great shape and are still growing.

Local favorite Clint Brown of Bainbridge, Ga., says mats in the Spring Creek basin are as deep as 13 to 14 feet, while river mats are growing out to about 7 to 9 feet in the Flint.

“I’d much rather fish here in the spring,” says Brown, who has a Lake Seminole Toyota Series win to his credit. “But for a fall tournament, these are about as good of conditions as one could ask for. We had a cold front the other night that brought some upper 30’s and dropped the water temperature below 70 degrees, but the weather is supposed to warm up and stabilize going into the weekend.” 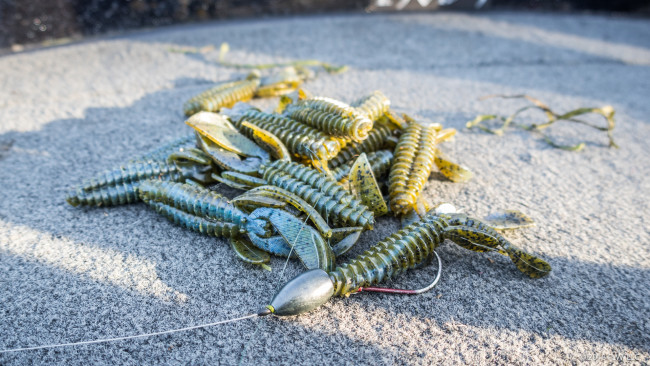 Due to its prolific grass growth, Lake Seminole is a mecca for punching and frogging, especially in the fall. That might explain why MLF Bass Pro Tour pros Bobby Lane and Fletcher Shryock made their way to Seminole for the Toyota Series this week: both anglers have a penchant for punching and the lake will set up good for that technique this week.

This time of year can also be kind to those who relish the topwater frog. Though frog fishing at Seminole is not as fabled as it is on Lake Guntersville, bass living on a bream diet in Seminole’s numerous backwater ponds love a frog.

November is also when shad on the main channels start to bunch up thick and migrate in big schools along the grass edges. Seminole is not necessarily known as a schooling lake, but this is the one time of year when groups of bass will pin shad schools up against grass edges and munch on them for a while; anglers running across this situation could get well in a hurry.

With the tournament launch site being the Earle May Boat Basin in Bainbridge, there are likely to be some aluminum rigs that make long hauls up the Flint River to target shoal bass. The upper Flint is running swift and muddy right now, but some will still go jump the shoals to catch “Flint River smallmouth.” 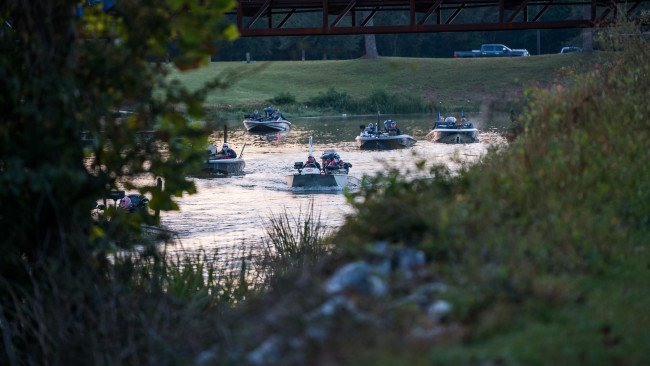 Fishing pressure is always an issue at Lake Seminole. Despite being full of cover, bass are super wary at this impoundment. After the well-known community stretches get a boat or two on them, the fish clam up quick. Having something to oneself is critical to winning.

“When I practice for multiple-day tournaments on Seminole, I spend most of my time looking for something totally off the wall,” says Brown. “I pretty much already know the main places I want to fish in the tournament – it’s the same places these fish use year after year and all the good locals know where they are. But there is so much remote water on this lake, especially this time of year; if I can find just one place off the beaten path and have it in my back pocket for a multiple-day event – that’s how you win here.” 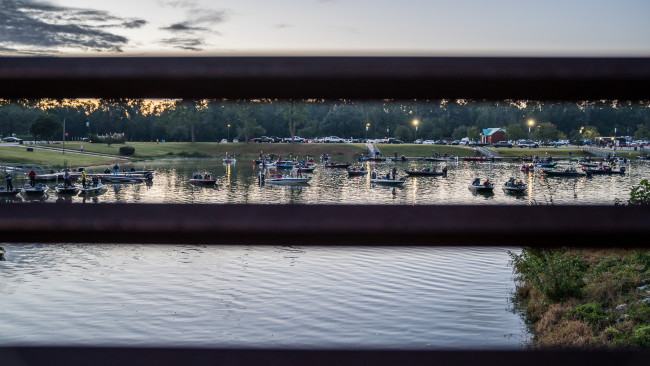 Rodger Beaver of Dawson, Ga., is a legend on Lake Seminole and has racked up four Toyota Series top 10 finishes in a row on the lake. Beaver offered his estimate of weights based on fishing the lake a couple of weeks ago.

“All through October, the grass has been matted out really nice to the edges,” he says. “With the last cold front, some of the outside edges are starting to fall and collapse and that usually hurts the flipping bite. It’s been tough to get a bite in practice, but that’s sort of the nature of Seminole – it’s not really a numbers lake – it’s more of a four to seven bites a day kind of thing but they’ll weigh 15 to 20 pounds.”

Beaver believes the first day of the event will feature a leading limit in the 18- to 20-pound range and it will take 30 to 32 pounds to make the top-10 cut after two days. His estimation for the overall win is a three-day total in the mid 50-pound range.