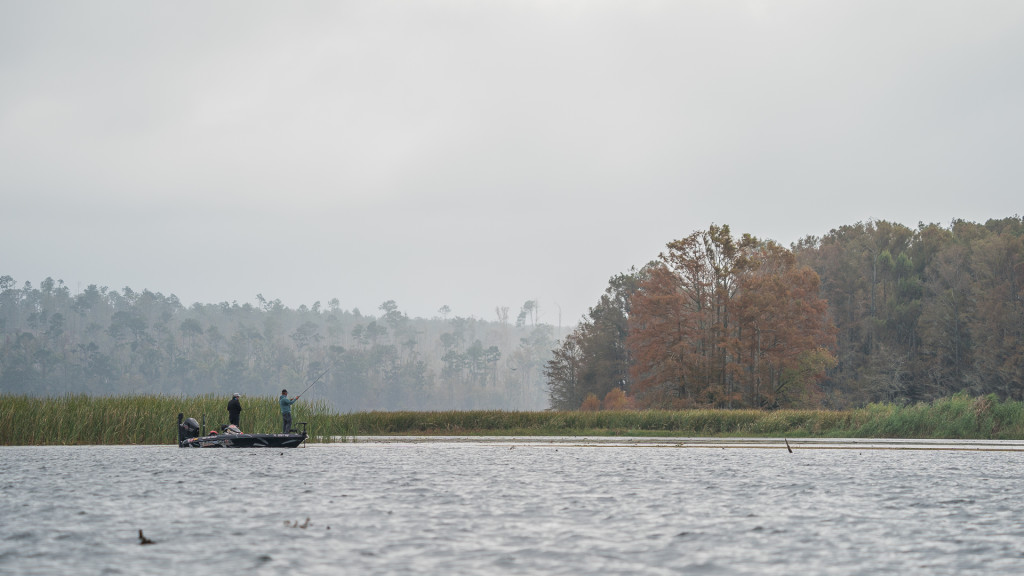 The top-10 pros fishing the final day of the Toyota Series Southern Division event on Lake Seminole in the first week of November were divided up into three distinctly different areas of the lake. Two pros, including tournament winner Keith Poche, were running smaller aluminum boats far up the Flint River to fish swift current. Three of the top 10 pinned their hopes in the shallow grass flats of the Chattahoochee River. And the rest of the field probed the deep hydrilla beds of Spring Creek.

Here is a closer look at their top-10 patterns. 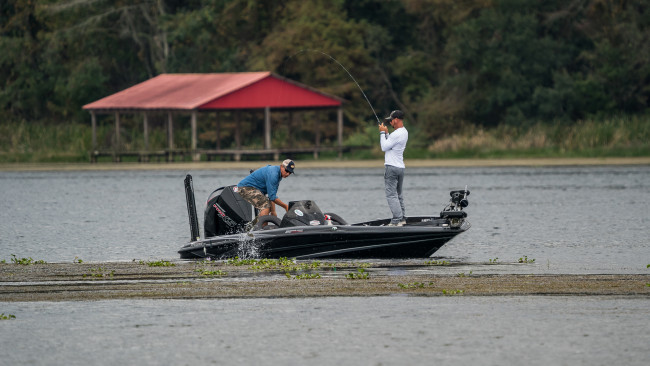 Mikey Keyso was one of the more consistent angler who fished the main lake, checking in a 17-3 catch on day one along with two 14-3 catches the next two days for a three-day total of 45-9.

Keyso had a master strategy of eschewing fishing pressure that almost worked for a win. For the first two days, he fished in the Spring Creek area with other anglers. But instead of fishing around the edges like they did, he opted to leave his trolling motor up and let the wind push him into the interior mats on the flats and bars, behind the deep grass edges.

“I think the more those guys went around those edges, grinding grass with their trolling motors, the more it pushed fish farther into the insides of those grass lines,” Keyso reasons. “The water inside those flats is shallower and clearer and I felt like I had a better chance of catching them with no trolling motor and just drifting with the wind.”

Another part of Keyso’s plan was saving a less pressured area for the final day.

“I wanted to get the best out of the creek to make the top 10 and then bail on it the final day,” he says. “I saved a couple of places over in the Flint and went to them the last day.”

Keyso’s master plan of avoiding pressure left him a heartbreaking 13 ounces shy of a win.

His key bait for pitching and punching mats was a  Reaction Innovations Sweet Beaver topped with either a 1- or 1 3/4-ounce Hawg Tech tungsten weight. On the final day, when fishing the lower Flint River, he also mixed in a a SPRO Bronzeye Poppin’ Frog, which fooled a couple of his keepers. 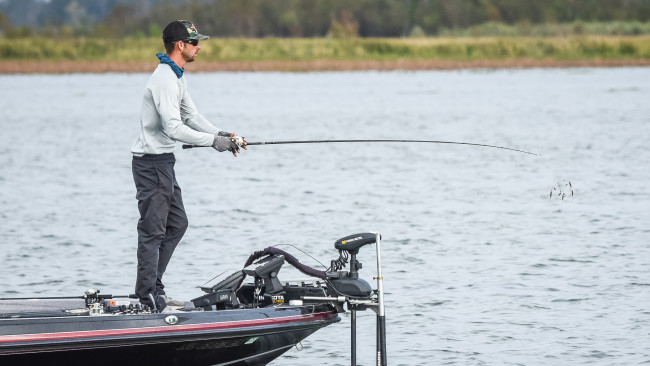 Bryan New was the top finisher of the Chattahoochee River contingent, bringing in consistent weights each day ranging from 14 to 16 pounds. New targeted grass clumps in 4 to 6 feet of water with a Megabass Vision 110 and an E.R. Lures Alabama rig.

“The area where I was fishing was all about the bait – it was loaded with shad,” New says. “The flat was located in a bay just off the main river and the shad were piled in there escaping the main current. On one particular spot in there I could catch a bass every cast for 10 minutes straight. They weren’t very big, but there was a pile of them in there.”

New visually targeted isolated grass clumps and cast to them with the jerkbait and the Alabama rig. The Alabama rig was trimmed with 3.8-inch Zoom Z Swims. 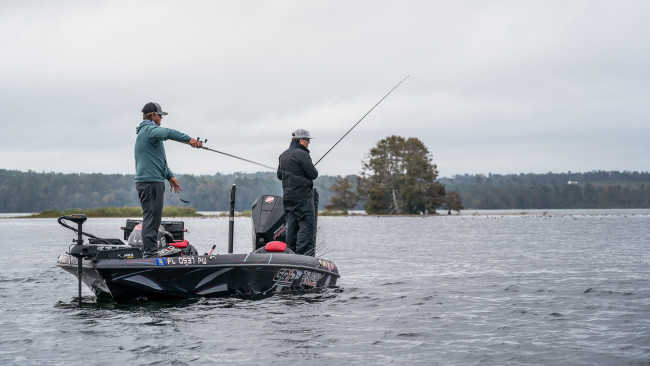 The McMillan brothers, Jared and Dillon, each led one of the first two days of the event. Jared struck first on day one with a 21-pound, 10-ounce catch to lead the early round.

J-Mac’s big catch came from punching deep hydrilla in the 10- to 15-foot range in Spring Creek. His primary punching bait was a Strike King Rage Tail Menace Grub in a black/blue flake topped with either a 1 1/2- or 1 1/4-ounce Strike King tungsten weight, tied to 65-pound-test Tour Grade braid.

“The grass was starting to die back on the outside edges,” McMillan says. “So I focused on some of the mats that were more protected on the inside of the hydrilla beds. Even if it was just barely matted out, if it had a good green top to it, I would fish it.

“That area was getting a lot of traffic and it was just worn out by the last day,” he adds. “I ran around on the final day just fishing new stuff and trying to make something else work.” 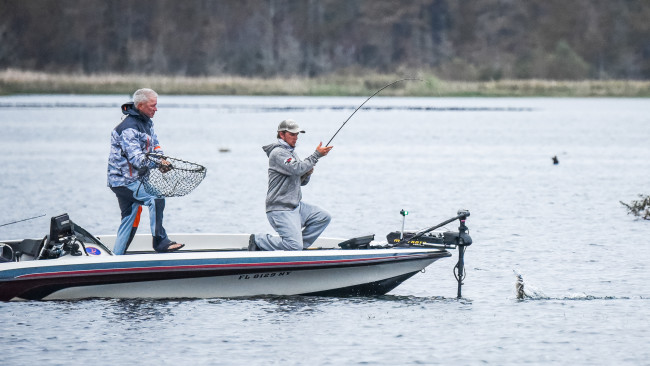 Dillon McMillan, the youngest of the McMillan clan, brought shock and awe to the weigh-in on day two when he dropped a limit for 24 pounds, 4 ounces into the scale. His catch included the day two big bass, which pushed the scales down to 7 pounds, 3 ounces.

Dillon’s monster bag came from a combination of a jerkbait on schooling bass and punching deep grass, both in Spring Creek. On the first stop in the morning, he would use Garmin Panoptix LiveScope to look for subsurface schoolers in the creek channel. If he saw bass chasing shad balls on his screen, he would cast a Megabass Vision 110 +1 into the frenzy. On the second day, Dillon caught two big bass, including the 7-pounder, on the jerkbait. After the morning flurry was over, he would then punch deep grass the rest of the day with a Gambler Why Not matched with a 1 1/2-ounce Flat Out Tungsten weight on 65-pound-test Sufix Performance braid. 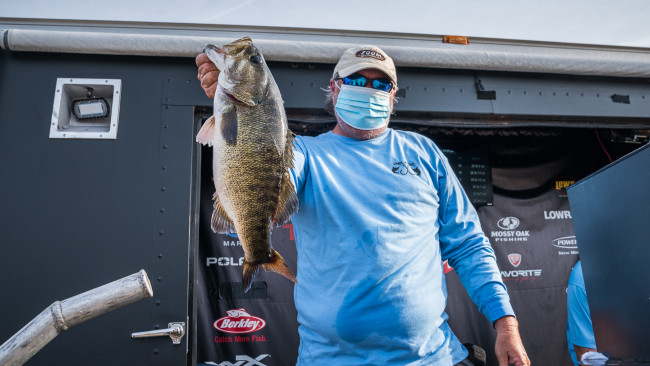 6. Murray runs the Flint for sixth

Jim Murray Jr., used an aluminum rig to run the upper stretches of the Flint River. While shoal bass is usually the quarry up the Flint, the fast, muddy water had a lot of largemouths pushed up in eddies and current breaks along the banks. Murray targeted the breaks with a ½-ounce spinnerbait and a Deps Buzzjet wakebait.

“My goal was to cover as much water as possible,” Murray says. “I tried to fish about 10 miles of the river a day. To keep that pace, I mostly burned a spinnerbait with an 8:1 reel ratio on 16-pound-test fluorocarbon. I preferred wood targets breaking the current – cypress trees and logs. If I could find a log lodged in a cypress tree cluster, it was even better. I never even flipped or pitched a plastic like Keith did – it was just too slow for me.” 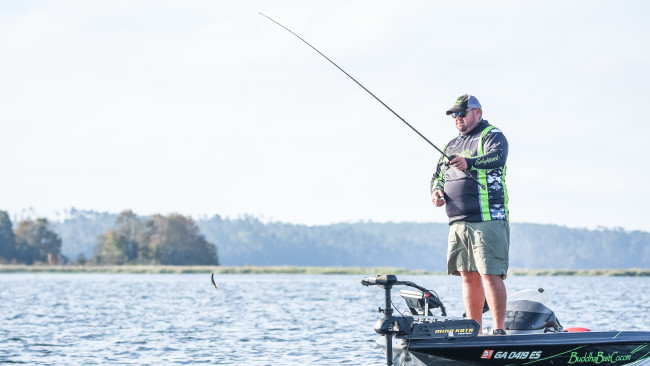 Jason Smith spent most of his week pitching grass growing in 12 to 15 feet of water in Spring Creek. His best day was day one when he caught 19 pounds, 3 ounces. Those fish came on a Buddha Baits Baby Momma punching bait in the colors of juice and hematoma pinned to a 1 1/2-ounce sinker. He pitched with 7-foot, 9-inch Buddha Enlightened Series rod lined with 60-pound braid.

“The water had gotten cool enough where it was starting to die back,” says Smith of the mats. “So I focused on any mats or hard, defined edges that were left. Once that grass starts falling like that, the fish will move into whatever healthy grass is left until it all dies back.”

On the final day, Smith made a move over to the Chattahoochee for a change of pace.

“I got tired of playing merry-go-around over there in the creek,” he says. “So I went over to the Hooch and fished some scattered grass on flats with a ¼-ounce Buddha Snooze Alarm buzzbait.” 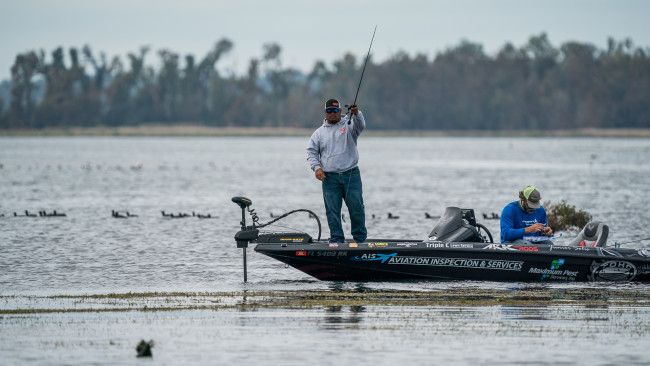 8. Solis flips and blades the Hooch

Santos Solis staked his claim in the Chattahoochee River side of Lake Seminole for a top-10 showing. The river was more stained than other areas of the lake and it allowed Solis to chuck a ½-ounce War Eagle spinnerbait around emergent grass lines.

“If there was any wind blowing against the grass, it made it better,” Solis says. “That pattern was best first thing in the morning and I usually caught two or three keepers that way.”

Once the morning spinnerbait bite died, Solis headed to some backwaters on the Chattahoochee to punch “junk mats” to finish out his limit.

“The mats were made up of floating junk over about 8 or 9 feet of water,” he says. “Gator grass, hyacinths, duckweed, floating logs – just a mix of weedy garbage really.” 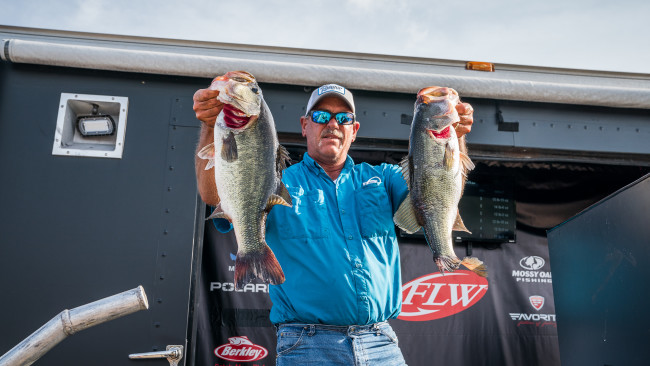 Gary Milicevic spent most of his week fishing the Chattahoochee River side of Seminole as well. His one-two combo was a Gambler Burner Worm in the morning and a Gambler Burner Craw in the afternoons, both were junebug color.

“It seemed like in the mornings, the fish would roam the outsides of the grass lines a little more,” Milicevic says. “So I would swim the Burner Worm on a 5/16-ounce weight along the scattered grass on the outside. Once the sun got up and the fish tucked up under the hydrilla, I’d punch the mats with a Burner Craw to finish out my limit and cull up.”

For the mat punching, he opted for a 1 1/4-ounce tungsten weight on 70-pound-test braid. 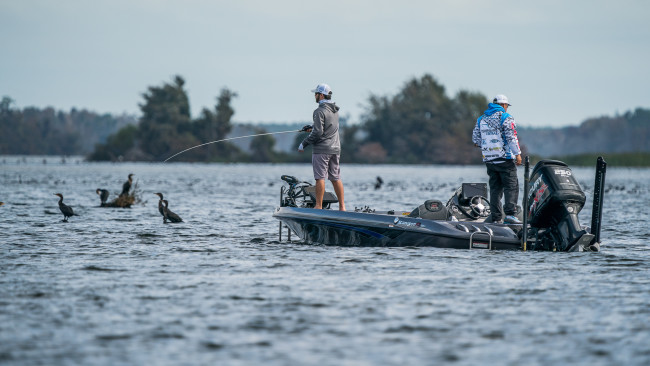 Corey Smith spent most of his week in Spring Creek. He caught a 5-pound, 10-ounce bass that won big bass honors on day one.

Smith targeted grass edges in the 10- to 12- foot range with two lures. In the mornings he cast a Texas-rigged Strike King Rage Cut-R Worm with a ¼-ounce weight to outside grass edges, letting the worm fall slowly down the edge. Once the sun got up, he felt the fish would tuck up under the matted hydrilla and he punched after them with a Zoom Z-Craw (blueberry) with a 1 1/2-ounce weight.

“The bites would come in flurries,” Smith says. “And several of them spit up big bluegill after I caught them. I’m guessing the bass were hunting those edges in packs looking for bluegill because the fish always bit in waves.”