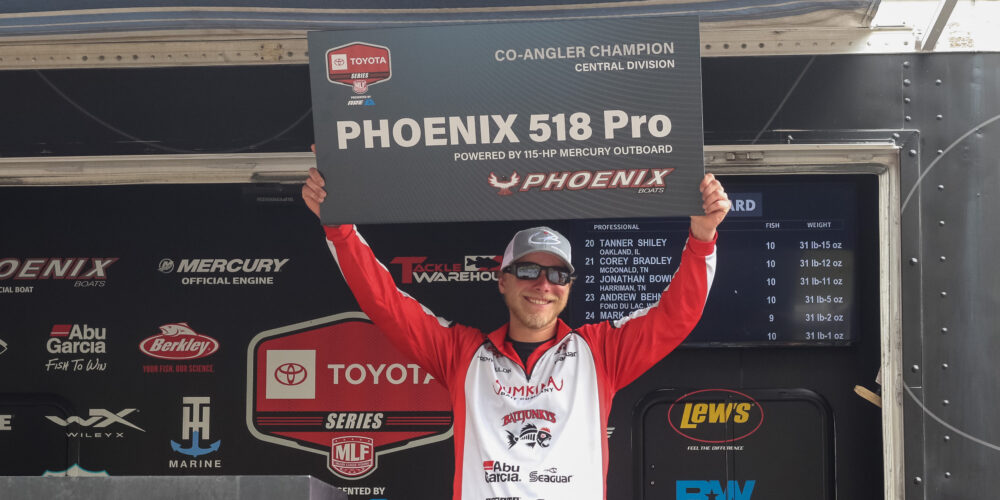 BYRDSTOWN, Tenn. – After three days of fishing, the dust settled for the Strike King co-angler field at the Toyota Series Presented by A.R.E. Central Division event on Dale Hollow Lake and Jeremy Bouldin found himself stunned and elated to be sitting atop the leaderboard. The Kings Mountain, N.C., angler finished with 35 pounds, 12 ounces and took home the top prize package of Phoenix boat and cash worth a total of $41,000.

“I feel awesome, this is amazing,” said Bouldin. “I never would have dreamed this would happen this week. I mean I fish to win, but never expected win.”

Bouldin’s preparation leading up to the week’s event was critical for him to survive and advance to the final day of competition.

“[Practice] went good the last day, I think that really helped,” said Bouldin. “I did [what I found] in practice the first and second day.”

Bouldin noted that Saturday called for adjustments when faced with the reality that is the forward-facing sonar craze.

“Today was a completely different ballgame, more out deep with LiveScope,” he said, shouting out his final day pairing of Isaac Peavyhouse for a small, but important assist in collecting his bag. “The last two days I was fishing an A-rig over trees.

“He was awesome, and he left his back graph on 2D for me. So, I just went old-school and when I’d see one on it then me make a drop to it and catch it.”

It worked out to the tune of 13-11, launching him from fifth to first when the scale finally closed.

Bouldin, who turned 27 just a day prior to the event, was able to lock down victory as a late birthday gift to himself. He has plans to fish the final stop of the Central Division, as it ensures him a birth to the Toyota Series Championship and more opportunity to learn.

“I’ve never been to any of the other lakes on the schedules beside [Chickamauga],” Bouldin said. “I want to fish as a boater (eventually), so I figure this was the best way to learn these lakes without getting my teeth kicked in too badly.”

No worries on that front here, as this time Bouldin did the kicking.