Combs Takes the Lead on Day 1 at Sam Rayburn 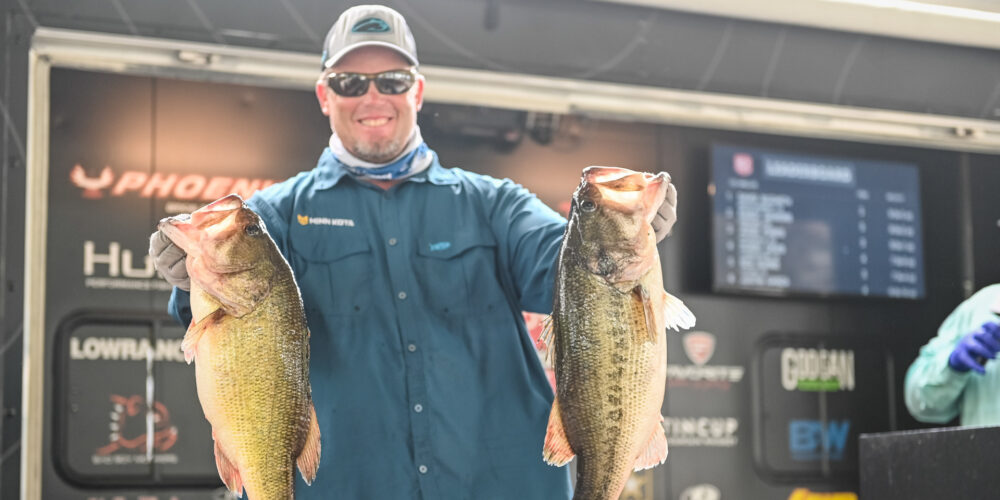 In the lead, Keith Combs dropped 22 pounds, 9 ounces on the scale to kick things off.

Combs, a professional veteran with more than a decade of experience at bass fishing’s top levels came to the scales with a duo of big bass, a 7-15 and a 6-pounder, capping a bag caught, “from the ramp to 35 miles away.”

“I started fishing here when I was probably 15 years old,” says Combs. “It has always been one of my favorite lakes to fish. It is so big that you have so many options on each day. You can do what you want, and it’s got enough water to accommodate big tournaments comfortably.”

“I can sleep in my own bed,” say Combs, the Huntington, Texas-native who has competed in every Southwestern Division event this year. “I wasn’t going to miss a chance to fish here.”

According to Combs, wind speed felt like it reached 30 mph at points during the day. That made navigating from spot to spot a challenge, though he says the day went mostly as planned.

“It went really smooth,” he adds. “It was really good. The two big kickers were a huge part of the day. I caught them and I had three more 3-pounders, but I just kind of moved around and junk fished. I was probably pretty lucky that I live close by and got my favorite areas.”

Combs is also fishing the Bassmaster Elite Series this season, marking his 11th year there.

“I have been kind of tied down lately,” he says. “But this series fit the schedule and you know, the championship for the Toyota Series is $250,000. That’s almost what the Bassmaster Classic pays, and I wanted to get a piece of that.”

Asked for a prediction for Day 2, Combs said the lake is changing and he expects the fish to react differently each day.

“Every day is different,” he adds. “For example, today was the first day that it has been warm. It was 90-degrees at lunchtime today. That might open up some windows for me tomorrow, at least that is what I am hoping for. The key, though, is to keep an open mind. I caught those kickers today in places where I had found fish in practice, but I didn’t expect them to be that size.”

“The biggest challenge today was the wind,” says Jones. “To combat that, we stayed inside of pockets.

“Early this morning, I caught two fish swimming a jig through the shad spawn. When that died, we went flipping. That’s how I caught the rest of them.”

Jones says his flipping was a slow, methodical grind with a lightweight worm. He didn’t have a limit until almost noon, but his spirits were bolstered by a kicker that came out of a bush, “the only bush my boater didn’t flip,” mid-morning.

A smattering of rain and high winds on Day 1 could give way to steady showers on Day 2—or, it might not. Some forecasts put downpours over Sam Rayburn during the late afternoon, but spring weather in East Texas is notoriously fickle.  The lake level is about 1 foot above pool and the water clarity is stained.