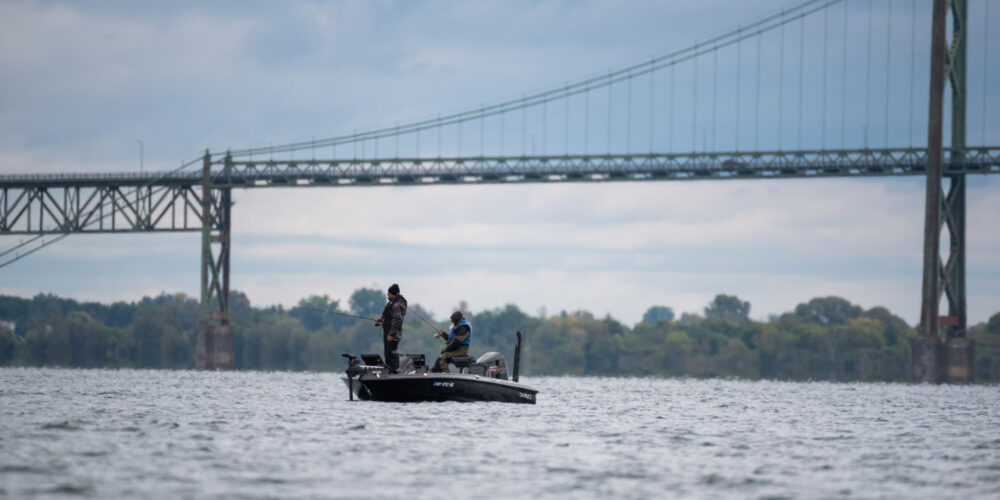 The weights at the Toyota Series Northern Division finale are simply insane after Day 1, with the potential to break records if it keeps up. That means leader Jason Kervin has zero room to breathe, as despite catching nearly 24 pounds today, five more anglers cracked the 23-pound mark, too.

It takes a long time to run 90 miles in a bass boat. In a walleye boat like Gary Miller’s?

“About two hours with a gas stop,” Miller said of his Ranger 522D. “Even longer on the way back with the fish.”

Still, when you have the ability to fish both shallow and deep – he said the shallow bite fired when it was sunny first thing in the morning, switching deep once the clouds rolled in – to catch your fish like he does, it’s worth it even if he had only four hours to fish.

Then again, today was his long day. Tomorrow, time will be even more of a premium.

“Tomorrow being my short day could be a factor,” Miller said. “But I’m going down there. We left so many fish there.”

Most people were blown away by today’s weights. Jonathan Kelley was not one of them.

“It’s what this place has turned into,” Kelley said. “I’m not surprised by the weights. It’s all about catching those 21-22 pounds multiple days to compete.”

Now, Kelley admitted the river is fishing tougher than usual, as he only got nine bites today, but a lot of that he chalked up to the wind making it hard to present his lures correctly. But also, because the water temperatures are higher than you typically see this time of year. With the wind and colder weather coming in today, though, he’s excited for what could be in store.

“The water temperature is going to plummet the next couple days,” Kelley said. “That could help, but I don’t know how fast. It should put more fish together, which would be great for me. I’m running as far as you can go and have saved some stuff that was too rough to fish today and maybe even tomorrow. But I’ll fish it Saturday if I’m fortunate enough to make it.”

Three drifts. That’s all Chad Mrazek has, but it seems it may be all he needs.

Fishing 50 minutes from takeoff, the young pro found three shoals that, while not producing much in practice, seemed to have a lot of potential. Today, potential became reality in a hurry.

“I left my fish early,” Mrazek said. “I rotated between the three drifts, but I caught all my weight the first drift on each spot.”

Despite the limited time, he’s already getting so dialed in on his drifts that he can pretty much call when he’s going to get bit, and considering two of his bites were 6- and 5-pounders, he figures there’s no reason to worry about expanding beyond his three drifts just yet.

A Top 5 bag on the pro side and the largest bag of the day (that’s the leading bag on the Strike King co-angler side) all from the same boat? Yeah, a lot went down in Brent Anderson’s boat today.

Because he’s been guiding on the river since July, Anderson told family and friends he would be disappointed bringing in anything less than 23 pounds a day. So, mission accomplished today.

Then again, what he didn’t expect was his co-angler, Matthew Kremers, to crack the biggest of the day behind him (24-5), nor for him to do it so quickly.

“He had his weight by noon, when I only had 14 pounds,” Anderson said. “I didn’t have mine until 2:30 p.m. and that was only because he quit using what he was using. I’m glad he did. But I was throwing back 3 ½-pounders even before I had a limit because I knew they weren’t going to get it done.”