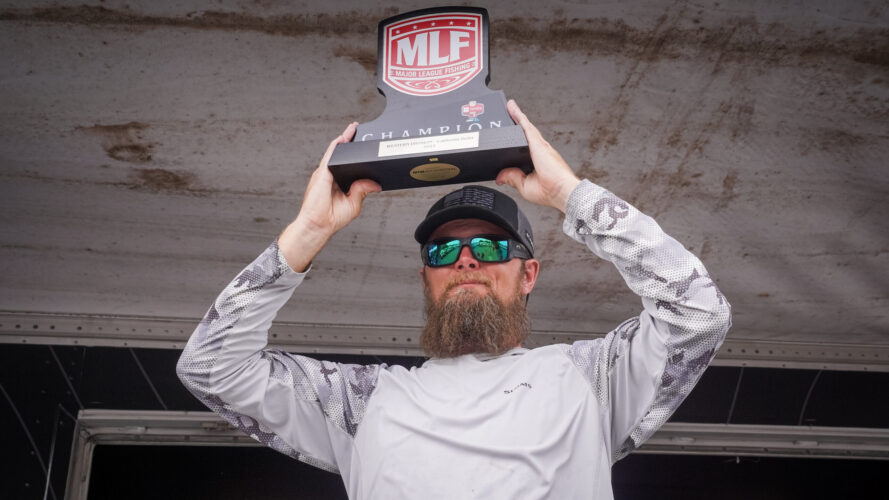 BETHEL ISLAND, Calif. – Moments before Stephen Tosh Jr. took the stage to claim his big win at the California Delta in the Toyota Series Presented by A.R.E. Western Division finale, Strike King Co-Angler Tyson Christman found himself kneeling on it, looking across the crowd at Major League Fishing pro Tai Au. It was Au who convinced Christman, a Glendale, Arizona, pro to step up and fish the Toyota Series; and Au was one of the first to greet Christman offstage as he celebrated a life-changing victory.

“Sink it in brother,” said Au, offering a collapsing Christman words of wisdom as the realization that a new Phoenix bass boat was headed his way.

“I have a Tracker right now,” Christman said, still trembling. “That means I can only fish certain events. Any big water, I can’t risk it. This changes everything for me.”

Christman said his week was a grind that consisted of throwing 5-inch and 6-inch watermelon red Yamamoto Senkos across any suitable target area that his boaters missed. Often, he launched the baits across canals to tiny target areas to try and entice a bite. The move paid off with 35-4 taken from the back of the boat. Now, he can move to the bow.

It wasn’t just one good day that got the job done for the newest Strike King co-angler winner, either. Christman was consistent as a co-angler can be from the back deck, weighing in 13-2 and 12-5 on Days 1 and 2, respectively, before his winning 9-13 bag came to the stage on Friday. He weighed five-fish limits each day of competition.

“I had one goal this year,” he added, glancing at a stroller in the background. “I wanted to win one of these events and get that little boy a boat. All of my goals just came true.”