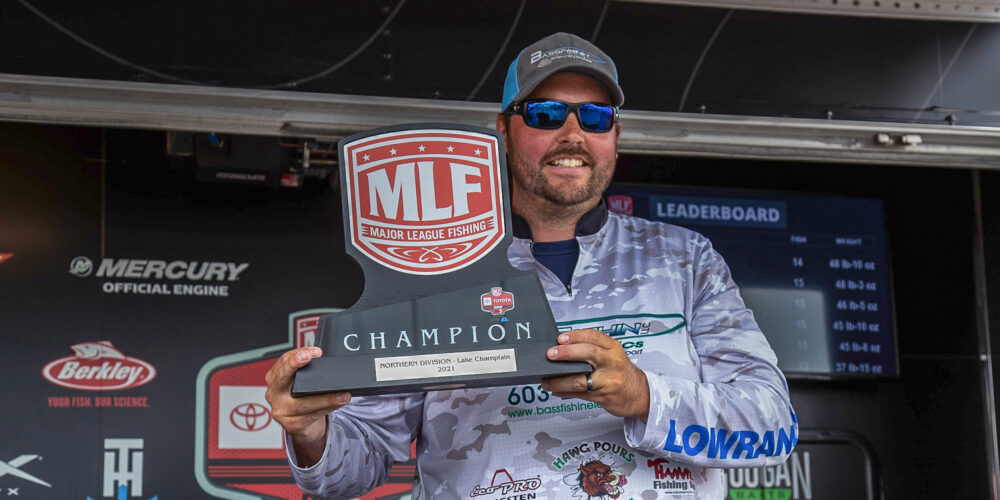 New Hampshire pro Stephen Estes saved his best for last on the final day of the Toyota Series Presented by A.R.E. Northern Division event on Lake Champlain. Putting a massive 21 pounds, 15 ounces worth of smallmouth on the scale, Estes totaled 61-3 to win $44,000. Since 2012, every event Estes has fished with MLF has been on Champlain, and this week he earned his first win in spectacular fashion.

Weighing all smallmouth and averaging more than 20 pounds, Estes did what everyone strives to do on Champlain. Looking hard for the mother lode, he started his four-day practice period with 90 hours on his motor – by the time he was back at the dock after Day 3 of the event, he’d ticked past the 126-hour mark.

“I was just doing a lot of looking and trying to find something special,” Estes said. “I don’t like to fish around other people and I felt like that was the deal and I just happened to stumble across it. I was idling around and I saw bait and decided to drop the Lowrance ActiveTarget down. I wouldn’t have known without the ActiveTarget.”

Finding something special in practice is one thing – putting it into action on tournament day is another.

“At the start of Day 1 I knew it was the spot,” Estes said. “The ActiveTarget just shows everything, it gives me all the confidence in the world. I could see them swimming around and we were immediately catching 3-plus fish from the start.”

Fishing in about 35 to 40 feet, Estes was on a massive amount of fish, with alewives, yellow perch, white perch, smallmouth and even a sunfish or two in the mix. Estes spent the majority of each day on his best spot, which had the best numbers, but he had a couple of other areas as well that had fewer fish, but good quality. None of his spots looked fishy on the map, but all of them kept his electronics lit up.

The owner of BassFishin Electronics, Estes couldn’t have done what he did without forward-facing sonar, which was ActiveTarget in this case. With his range set out to 120 feet, Estes caught fish anywhere from a long cast away to right under his boat. One of his keys on the first two days when it was windy was an independent pole mount from Cornfield Crappie.

“I bought that mount maybe a year or so ago,” Estes said. “I started with LiveScope on the trolling motor, then I changed trolling motor brands and now I’m running all Lowrance. The Lowrance isn’t quite as easy to line your bait up, because the arrow isn’t perfect, but the whole point of the independent mount is when you’re on Anchor Mode. You can independently control it – that was huge the first two days. I keep a remote in my pocket and it has foot pedals.”

“Every fish was different,” he said. “I caught some fish suspended, I’d watch my drop-shot fall, I’d see it stop falling and set the hook. I would never feel the fish bite, I’ve been doing that for three years and I’ve learned to watch my bait real close. Some of the fish I was catching 100 feet out from the boat – I can’t make a cast with a drop-shot further than 100 feet according to ActiveTarget. There was no rhyme or reason, I can’t tell you how many fish swam up to my bait and didn’t bite it. I just kept my head down and kept fishing and fishing and put it in front of a lot of fish.”

Though he had to relocate his fish a bit each day, it’s almost impossible to overstate how many fish Estes was on. His co-anglers nearly always caught big weights as well, and doubles from the front and the back were common. Given the fish he found and his skill with electronics, it would have taken something herculean to beat Estes this week.

“I had a feeling [after Day 1] but I chose not to acknowledge it,” says Estes. “It’s just an awesome feeling, I never expected this at all, this group of anglers is so good,”