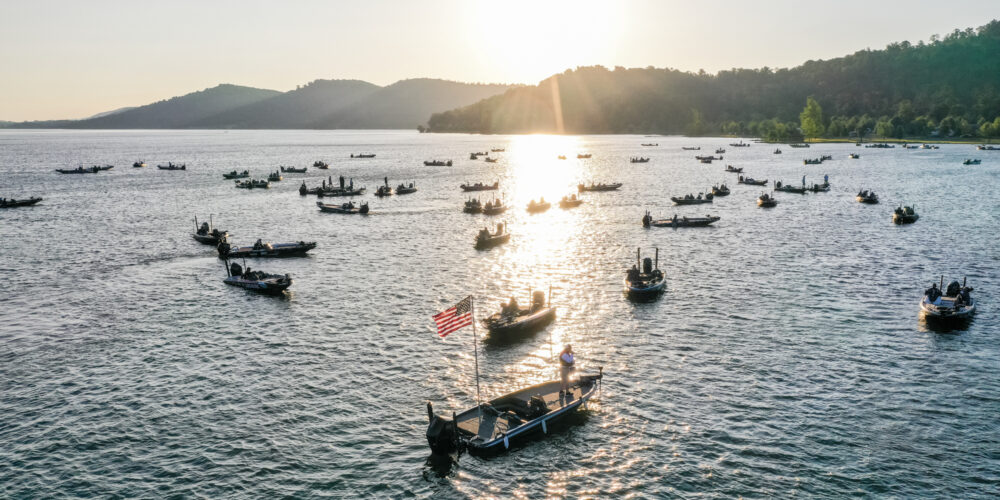 GUNTERSVILLE, Ala. – The 2022 Toyota Series Championship at Lake Guntersville Presented by A.R.E.  will take place next week in Guntersville, Alabama, Nov. 3-5, where the nation’s best Toyota Series pros and top international anglers will compete for a top award of up to $235,000 cash. Hosted by Marshall County Tourism and Sports, the three-day, no-entry-fee event is the culmination of the 2022 Toyota Series Presented by A.R.E. season, a six-division circuit that offers a path to the new 2023 Tackle Warehouse Invitationals and ultimately the Bass Pro Tour.

“Lake Guntersville offers some of the most challenging and most exciting bass fishing in the country,” said Katy Norton, President of Marshall County Tourism and Sports. “We look forward to hosting the MLF Toyota Series Championship in North Alabama and encourage our community to come out to Guntersville Civitan Park for the daily weigh-ins.”

Pro Josh Butler of Hayden, Alabama, said he was thrilled to finish out his season fishing a championship on his home lake and is looking forward to a fantastic event.

“We may not see the super heavy weights that we normally see on Lake Guntersville due to the time of year, but 4-pounders will definitely be key,” Butler said. “There will be a lot of frogging, flipping and maybe some Alabama rigs, but guys are pretty much going to be able to fish to their strengths in this event.

“Bridges and causeways could play a big part, especially this time of year – if someone hits the right bridge at the right time, they can catch a 25- to 30-pound limit in 25 minutes,” Butler said. “However, I really think the guy who wins it will probably be fishing grass – flipping or frogging.”

Butler said he wouldn’t expect a bridge or causeway to produce quality weights three days in a row, but it could be a strategy that will get a guy back in the game if he has a slow start.

“I think we’ll see most anglers fishing anywhere from 3 to 4 feet of water, throwing a frog in matted grass or in 8 to 12 feet of water, flipping or throwing a ChatterBait, swimbait or Alabama rig in some scattered hydrilla,” he said.

Butler said he predicts that 20 pounds per day would put an angler in a really good position this time of year, and that he expects the winning weight to be around 60 pounds.

“I’m blessed to be able to fish this event on my home lake and although I’m not really fishing to my strengths, as far as offshore, grouped up fishing, I still have a lot of experience on Guntersville, and I feel good about it,” Butler said. “We aren’t fishing for points, so I’m going out there with the intent to try to win the event. I’ve had a great year and can’t think of a better way to end it than to compete for a championship on my home lake.

“I also really appreciate the opportunity to fish for a quarter of a million dollars with no entry fee,” Butler said. “This event gives aspiring pro anglers a fantastic platform to make a name for themselves, and can be a great catalyst to launch, or boost, a pro career.”

Anglers will take off daily at 7 a.m. CT from Guntersville Civitan Park, located at 1130 Sunset Drive, in Guntersville. Weigh-ins will also be held at the park and will begin at 3 p.m. Outdoor vendors will be onsite prior to and during weigh-ins Thursday and Friday from 2-6 p.m. and Saturday from 1-6 p.m. with free giveaways while supplies last. Fans can register for daily prize drawings for the opportunity to win a YETI Hopper Flip Cooler. Drawings will take place daily following the weigh-in.

Fans are welcome to attend the daily takeoffs and weigh-ins and also follow the action online through the “MLF Live” weigh-in broadcasts and daily coverage at MajorLeagueFishing.com. The 2022 Toyota Series Championship Presented by A.R.E. will premiere on CBS Sports next fall.

The full field of anglers will compete on Days 1 and 2 of the event, with the top 10 pros and top 10 Strike King co-anglers based on cumulative weight from the first two days continuing to the third and final day. The 2022 Toyota Series champions will be determined by the heaviest three-day total weight.