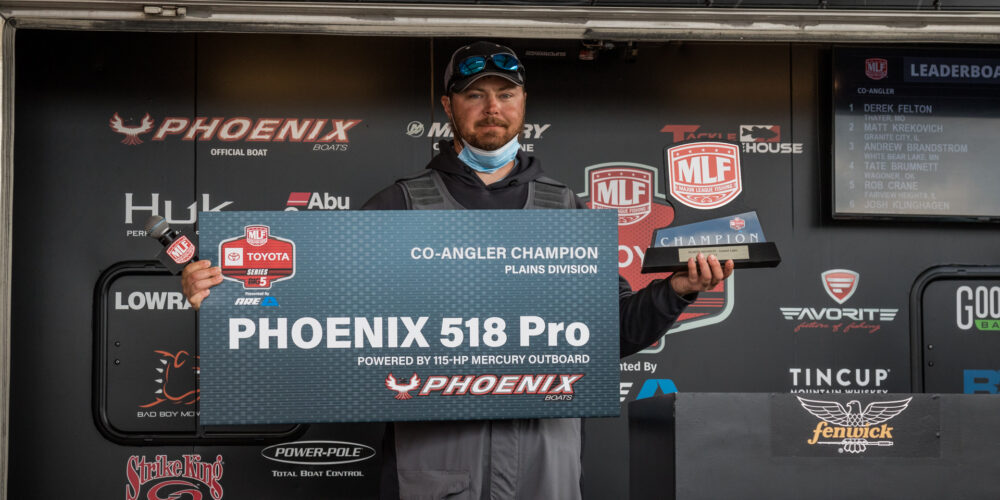 Winning away from your home lake can be hard to do, especially when you fish as a co-angler. For Derek Felton of Willard, Missouri it took just three tries in the Toyota Series Presented by A.R.E. to get a win as a Strike King co-angler. And like pro winner Andy Newcomb, Felton’s previous events had taken place on Lake of the Ozarks – in the second Plains Division event presented by Fenwick on Grand Lake, Felton would top the field to walk away with a new Phoenix 518 Pro.

Grand Lake is often considered an “Ozark” lake, so it’s not any surprise to see anglers who have experience on Lake of the Ozarks, Table Rock or Bull Shoals do well.

“This is the second time I’ve been to Grand,” Felton says. “It’s a lot different than Bull Shoals and Table Rock and everything else at home. But I like it. It’s a good lake.”

Catching 11 pounds, 13 ounces on Day 1, Felton took the lead on Day 2 with a limit weighing 16-10, which included a 6-14 kicker. Today, paired with Newcomb, he caught just four bass worth 8-15, but they were more than enough to secure the biggest win of his career.

“The first day I fished pea gravel banks and caught all of my fish on an old Wiggle Wart,” he says. “The second day I fished chunk rock banks and flipped a jig and my first fish was that 6-14. It was a really good day yesterday, I was really blessed.

“Today was very nerve-wracking. I didn’t have a fish until 11 o’clock or noon, but I’m thankful for what I got. I caught the four on a jig.”

Felton actually has a Phoenix boat already at home, but he’s got a plan for where to put his new 518 Pro.

“This one is going to go to my grandpa,” he says.

Good draws with good pros are always a recipe for success from the back of the boat. Felton is thankful for them and thankful to finally see his hard work pay off.

“All of my boaters I had this week were phenomenal,” he says. “I couldn’t have asked for better guys to fish with. I was ready for my dues to be paid in, so it’s about time I won one.”