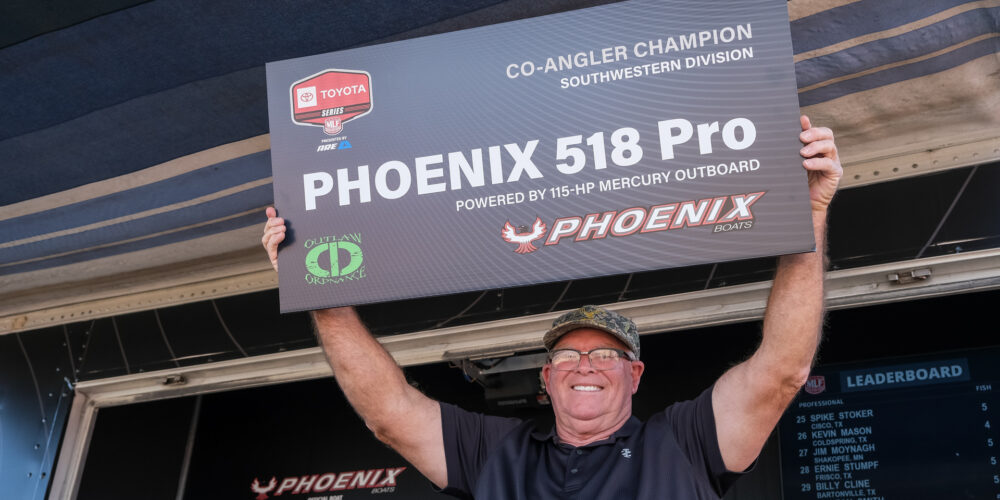 There’s nothing like a friendly competition between friends. The one between Ricky Friedrich and Tackle Warehouse Pro Circuit pro Matt Reed ended up with Friedrich earning himself an all-important boat.

You see, Friedrich admittedly doesn’t fish much anymore, but recently he and Reed were discussing who had won more boats from tournaments.

Well, they’re all tied up now after Friedrich brought in four fish for 13 pounds, 8 ounces to win himself a brand-new Phoenix boat at the  Toyota Series Presented by A.R.E. Southwestern Division event on Lake Texoma.

Fishing with Braxton Hollenshead, Friedrich caught himself a pair of kickers early that carried him.

“We started down the bank, and I picked up an Azuma Matt Reed Square Boss crankbait and threw it behind the boat,” Friedrich said. “Suddenly, I was like, ‘I’ve got a pretty good one here.’”

That one weighed right at 5 pounds.

“Then Braxton fished a laydown, and I was like foaming at the mouth watching him fish it. Once he got done polishing it and moved on by it, I decided to toss in on it and let a Bass Assassin Straight Tail Shad sink down deeper on it. Well, it loaded up with another pretty good fish.”

There wasn’t much left to write home about the rest of the day outside of a pair of small keepers, but it was enough for him to catch up to his friend boat-wise.

“I couldn’t lay down and walk off if I was behind,” Friedrich said. “Well, maybe I can now.”