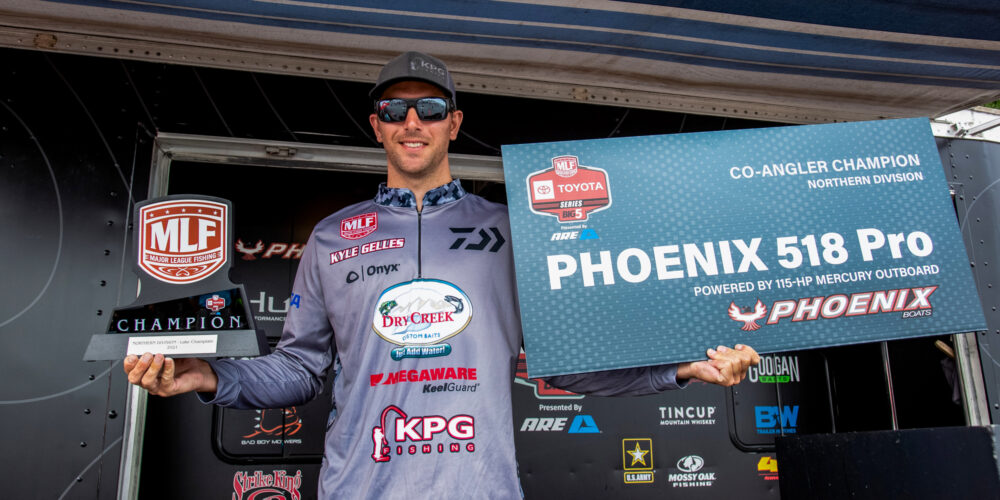 Pro Circuit angler Kyle Gelles decided to jump in on the co-angler side at Lake Champlain. The decision seems to have paid off well. Photo by Cobi Pellerito. Angler: Kyle Gelles.
July 17, 2021 • Jody White • Toyota Series

A full-time pro on the Tackle Warehouse Pro Circuit Presented by Bad Boy Mowers, Kyle Gelles is still trying to make it in the fishing world. That means a lot of time on the road away from his home state of Idaho, and that he doesn’t always have the time or budget to make fishing from the front of the boat worth it.

So, for his first-ever trip to Lake Champlain for the Toyota Series Presented by A.R.E. Northern Division event, Gelles opted to hop in on the Strike King co-angler side. After putting up 48 pounds, 10 ounces for three days, he took home his second MLF win and a new Phoenix boat and some cash for a total of $34,125.

“I caught fish on a variety of different baits and patterns, just depending on the pros I fished with,” says Gelles, who hails from Pingree, Idaho. “We targeted smallmouth predominately with everyone I fished with, which worked out well for me. I threw a lot of moving baits, a jerkbait, a spy bait, and a crankbait a bit. And I backed that up with a Ned rig, a drop-shot and a jig. Just your standard smallmouth arsenal really.

“This is my first time ever seeing the lake, I can see why it’s everyone’s favorite lake in the world,” says Gelles. “The first couple days were tough, kind of a grind, but I drew Dakota Ebare today and he just put us on a wad of fish. We had a lot of fun today – my hands are pretty sore.”

Living on the road in a camper and only going back to the west occasionally, Gelles has already fished in five different Phoenix Bass Fishing League Presented by T-H Marine divisions in 2021, all in a quest to learn more and stay at the top level.

“I learn from every single one of these guys I go out with,” says Gelles. “The big decision about whether I fish as a boater or a co-angler just depends on where I’m at at a given time. How much time I have in a given area, and obviously the financial aspect of it. I want to make sure I can come back year after year on the Pro Circuit.  I’m staying out here on the road and I want to fish as much as possible. But, I’ve gotta make sure I keep within my budget, so fishing as a co-angler helps with that.”