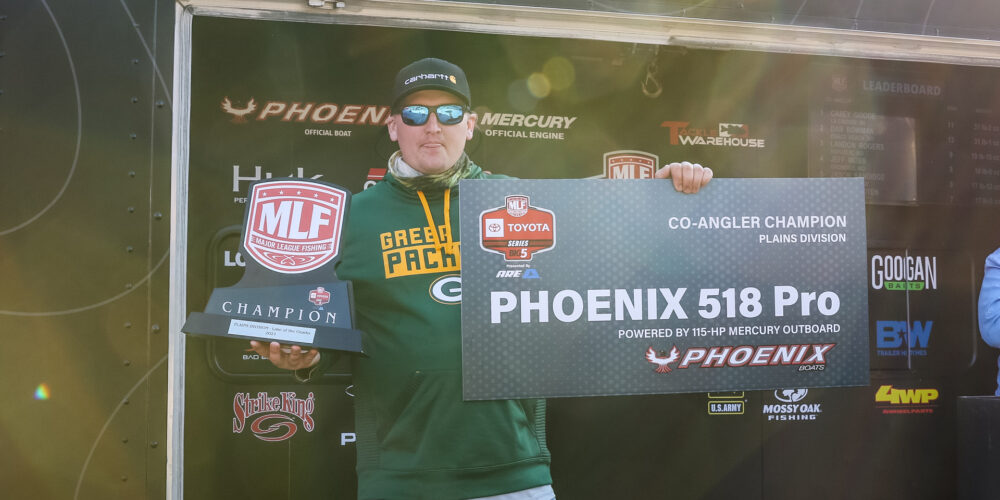 The pro division at the Toyota Series presented by A.R.E. Plains Division opener on Lake of the Ozarks, which was presented by Fenwick, was a runaway victory. But it was a much different story on the Strike King co-angler side as it came down to the wire.

Wisconsin’s Casey Goode edged out Osage Beach, Missouri’s, Dan Bowman by the slimmest of margins, a single ounce. It was a tight finish made a little more dramatic when Goode came in with just two fish.

Thankfully for him, one was nearly 5 pounds, and he was able to secure the win and the new Phoenix boat with 31 pounds, 2 ounces overall.

“One ounce, I can’t believe it,” says Goode. “I knew it was going to be close and come down to ounces when we were in the bag line.”

The first day, Goode was paired with Andre Dickneite and spent most of his time throwing a crankbait to bring in a limit weighing 12-9 to finish the day in second place.

“The Berkley Frittside 7 in spring craw came up big time,” says Goode. “I also caught some with a split-shot rig and Zoom finesse worm.”

The second day, he was paired with Terry Blankenship and switched gears for baits and hauled in four bass for 11-6 to take over the lead.

“I caught them on an Alabama rig, a spinnerbait and a Reaction Innovations Sweet Beaver,” says Goode.

On the final day, he was paired with tournament-winner Michael Harlin and brought in two good ones worth 7-3.

“I threw an Alabama rig the final day because [Harlin] was catching 20 pounds a day on it, so I obviously wasn’t going to change it up too much,” says Goode. “It was a wide variety of baits for the week. I watched what my boaters were fishing and went off of some of my confidence techniques. I was fortunate to pick the right baits at the right time, plus a little luck to go with it.”

Goode had never been to Lake of the Ozarks before this week but committed to fishing the Toyota Series Plains Division.

“I wanted to take the next step, and I’m glad I did,” he says. “I wasn’t able to practice, so I have got to thank YouTube because that’s all I had to go on. I also want to thank all of my boaters. Today, Michael helped out late in the day when he already had 20-pounds and that’s when I got my big one, so my hats off to him. All three of them were great and each helped me along in some way.”