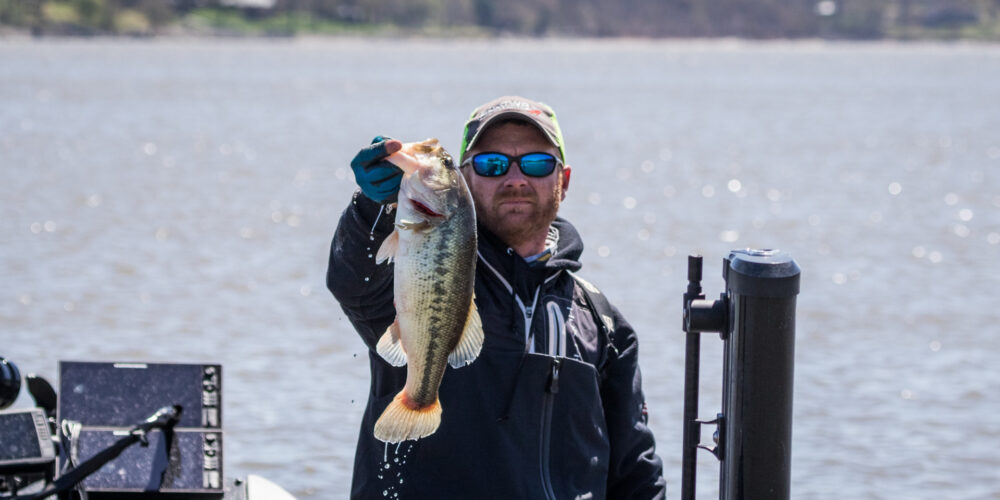 What started out as a breezy, cool morning has since turned into a sunny, though still breezy, spring day for the start of the Toyota Series Presented by A.R.E. on Grand Lake. Dock talk leading up to the event, which is Presented by Fenwick, was that there will be plenty of big fish caught in this tournament and so far that has kind of been the case.

While no giant bags have been reported yet, there have been plenty of pros reporting fish of 3 ½ pounds or better in their livewell. Grand is one of those lakes loaded with fish in that size range, but generally, when you’re around that caliber of fish you may only get a handful of bites each day – which seems to be the case today.

From a technique perspective, the majority of pros we came across on the water were doing exactly what you should be doing this time of year on Grand – rolling a big spinnerbait up on the bank or pitching a jig.

Despite the chilly weather to start the day, several pros reported a good bite for the first hour of the day or so. One of those pros is Brent Algeo, who has 14 or 15 pounds in the box, but hasn’t had much of a bite since the sun popped out mid-morning.

Doyle Isom Jr. and co-angler Kit Lueg also had a good morning, and Lueg was working on a solid bag with two over 4 pounds in the box and a 6. So, no doubt the quality fish are chewing.

From a “local” standpoint, Sheldon Collings and Jeremy Lawyer were the only two our crew stumbled upon. Both didn’t have limits, but neither seemed concerned about it. Lawyer said his biggest was maybe 3 pounds, while Collings had a 4 ½ in the boat.

Speaking of Collings, Sheldon’s dad, Mark Collings, reported having four fish for close to 18 pounds early this morning. With plenty of knowledge on this pond it seems like Mark should be in good shape come this afternoon.

The sun has been beating down for several hours now and the water temps are in the upper 50s to low 60s across the lake so you can almost bet there will be an afternoon flurry. Tune into the weigh-in starting at 3 p.m. CT to see just what kind of weights Grand Lake kicks out.