Harlin Dominates Wire-To-Wire on Lake of the Ozarks 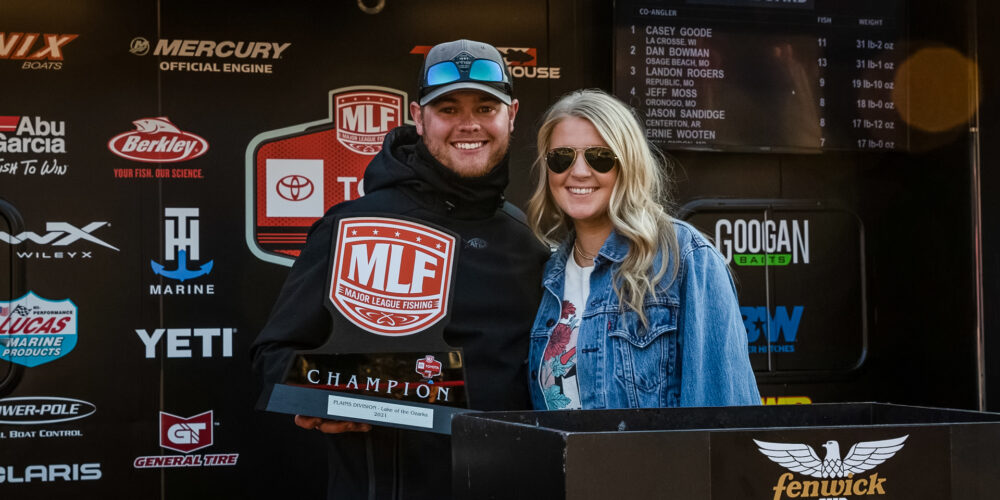 The frigid weather leading up to the Toyota Series presented by A.R.E. Plains Division opener on Lake of the Ozarks, presented by Fenwick, was a constant storyline throughout the event.

While the cold weather put a damper on most anglers fishing this week, it certainly didn’t hinder winner Michael Harlin of Sunrise Beach, Missouri. Harlin dropped 21 pounds, 11 ounces on day one and would go on to back it up with back-to-back 20-pound bags to walk away with the win in blowout fashion. His winning total was 62-1 for the week, besting second place by more than 15 pounds.

This is the second win of Harlin’s Major League Fishing career, however, it’s certainly the most fruitful. To go along with the hardware from his first Toyota Series W, Harlin also nabbed a check worth over $37,000 for the victory.

Each day was a little different in how the bite unfolded for Harlin, but he caught them all three days doing the same thing. Throwing an Alabama rig while watching his forward-facing sonar.

“Today, I stuck with the same plan,” Harlin recounts. “I was fortunate to sit right down on them this morning when they were biting, or it would have been a lot tougher. I caught my two biggest fish right away and had most of my weight by 9 o’clock.”

Harlin was able to cull once in the afternoon to get over 20 pounds for the third straight day.

All week, he targeted what he considers the mid-depth range and cycled through multiple spots.

“I keyed on the 6- to 20-foot range,” says Harlin. “All of the places were between the toll bridge and the dam. I started the tournament with around 15 spots I found in practice and had narrowed it down to eight or 10 by today. I also found some new stuff yesterday and that’s where I started today.”

Keying on brush and rock to find fish, Harlin thinks locating staging areas was of more importance. Timing was another critical factor.

“It was mainly brush but also some rock and pea gravel,” says Harlin. “It didn’t seem to matter what it was they were holding to. The first day I caught them all day and the second day, it was late in the day. Today, it was an early bite. I think you just had to hit it right when they were in that feeding window.”

“I fished the French pearl color and pro blue red pearl and would alternate if it got sunny or cloudy,” he says. “I also caught some fish today on a Megabass Vision 110 in stain reaction OB.”

Forward-facing sonar was vital for Harlin, both for locating fish and getting them to bite.

“I watched just about every fish I caught this week eat the bait,” he says. “It takes a lot of practice with it, but you can learn to interact with the fish. It helps you get them to bite when they aren’t really biting that good or just following it. It gives you a clue to change your retrieve a little if they are not committing to it.”