Harlin Grabs Lead on Lake of the Ozarks 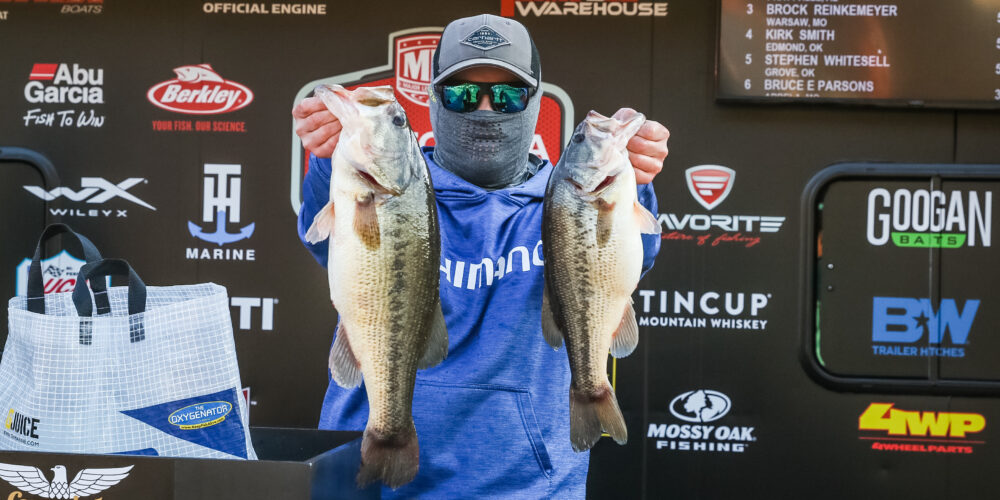 On one hand, the results from Day 1 of the Toyota Series presented by A.R.E. Plains Division opener on Lake of the Ozarks didn’t provide the results many hoped for. On the other, they were results many expected.

The event, which is presented by Fenwick and hosted by the Tri-County Lodging Association, comes on the heels of a wicked cold snap that left Lake of the Ozarks still thawing out. To help, Michael Harlin brought some heat in the form of a Day 1-best bag of 21 pounds, 11 ounces to grab the early lead.

The questions that surrounded the bite and how the bass would cooperate after frigid temperatures gripped the region and kept parts of the lake under ice all the way up until the event began this morning.

It’s that time of year when blastoff requires many layers of clothing and by the weigh-in, short-sleeve shirts are just fine. The bass may not have caught up to the warming trend just yet, but things should get better as the week goes on.

Generally, pro anglers tend to downplay the fishing quality before an event, but they were truthful this time. It turns out the fishing was as tough as many predicted, with plenty of zeroes to go with one or two bags in the standings. A handful of anglers found them, though, including tournament leader Michael Harlin of Sunrise Beach, Missouri.

Harlin, a 2019 Phoenix Bass Fishing League winner on Lake of the Ozarks, walked across the stage near the end of the weigh-in and took control of the lead with 21-11.

On a day when most anglers struggled to catch five, Harlin had limits to spare as he estimates catching 15 keepers on the day.

“The day started out really good,” Harlin says. “We ended up catching a lot of fish, and I probably had my first limit by around 9:45 this morning. The bigger fish started to bite later in the day, and I went through three limits to get to my total weight.”

Included in his late-day catch was the day’s biggest bass, a 6-pound, 6-ounce Ozarks kicker that bit an Alabama rig around 2 o’clock in the afternoon.

“My two biggest ones came late in the day on an Alabama rig down towards the dam,” Harlin adds. “It wasn’t shallow or deep where I was fishing; I’d call it a mid-depth range.”

Looking ahead, Harlin is very pleased with his first-day haul and hopes to catch at least half of that the next two days of fishing.

“Obviously, 21 pounds will be hard to duplicate,” he admits. “I feel pretty good that I can scrounge up maybe 12 pounds a day the rest of the week.”

On the Strike King co-angler side, catching a limit was a rarity. Ernie Wooten of New London, Missouri, managed one of just four limits from the back of the boat to take the early lead with 13 pounds, 11 ounces.

“I had a good time out there today,” says Wooten of his day with pro Mike Smola. “We caught a ton of fish. They started off biting early in the morning and they bit really good between noon and 1 o’clock, and then the bite slacked off.”

Looking ahead, he’s hoping to be around fish again tomorrow as he heads into the second day with the lead.

“As a co-angler, it all depends on where you are going and what you are doing,” he says.