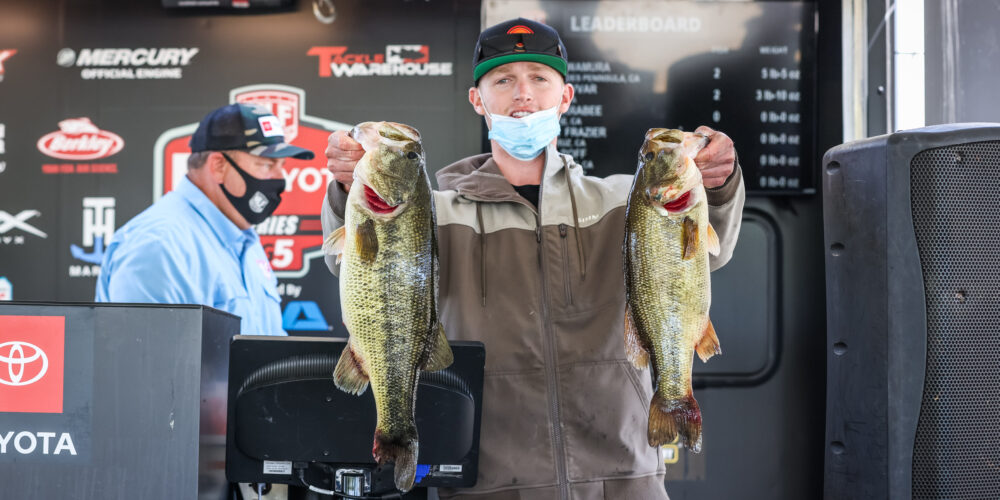 Logan Huntze of nearby Discovery Bay, California, dropped 27 pounds, 4 ounces at the Toyota Series Presented by A.R.E. Western Division event on the California Delta to take the lead on Day 1. Huntze was one of eight anglers to top 20 pounds and will take a lead of 5-8 over reigning Delta champion Ish Monroe into the second day.

The Delta bass are mainly done with the spawn and are biting well with plenty of limits to go around. Though Huntze is well ahead of the pack, the quality of the fishing on the Delta means that big comebacks are possible, and some of the anglers behind him are famous for their ability to drop a big bag on the sprawling fishery.

Today was a good day for the Huntze family as Logan’s brother Colby Huntze leads the Strike King co-angler side with 19-10. The brothers each finished in the Top 10 last summer on the California Delta, with Logan finishing in eighth and Colby in third. Both are looking to improve on those finishes this week.

While Logan made it look easy with a massive bag, it was anything but that as he survived boat troubles that cost him hours of fishing and required a ride to get back in to weigh-in.

“It was a crazy day because I broke down at 10:30 this morning,” he says. “I wasn’t able to get on plane the rest of the day and had to idle everywhere. I couldn’t make it back in, so I needed to get a ride back to weigh-in from my buddy.”

Though restricted to one area, he was thankful that he was in a good location when he broke down.

“I had a pretty good limit when I started having boat troubles, and I was able to cull up twice afterward,” says Logan. “It kind of worked out because I was close to where I wanted to fish anyways.”

He says he caught roughly a dozen keepers, and also culled a pair of fish that were close to 4 pounds.

“I caught some on topwaters and some flipping; that was pretty much it,” Logan says. “Tomorrow looks like it will be a pretty similar bite with the tide the way it is. They are biting good out there, and I hope I can get a big bag again tomorrow.”

Colby was able to sack up a limit worth 19-10 while fishing with pro angler Christian Ostrander.

His day started with an early limit and he was able to slowly upgrade throughout the day.

“I caught two good ones early to go with three rats,” Colby says. “I had a quick limit and then had to grind it out the rest of the day. My last fish of the day was my biggest, a 5-pounder.”

Colby is keeping it simple in his approach with soft plastics.

“I caught some punching and the rest just throwing a worm around,” he says.