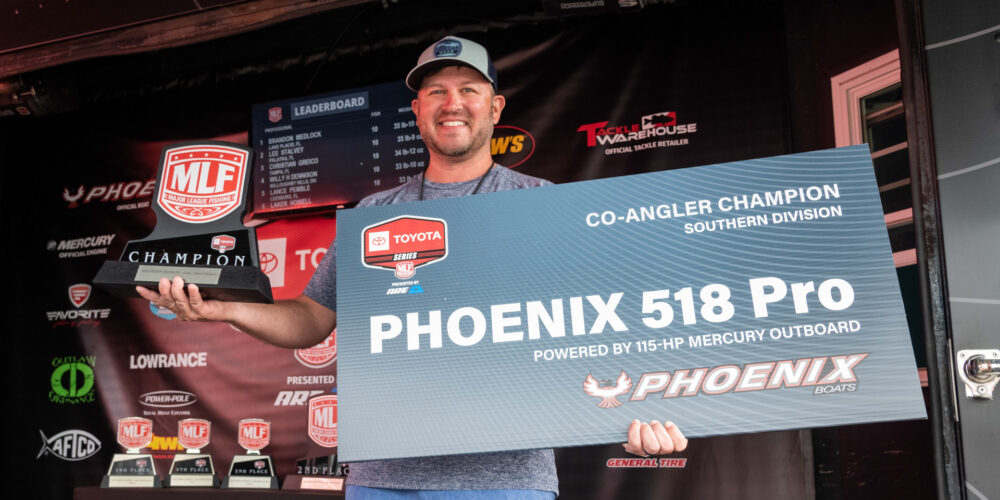 CLEWISTON, Fla. – Brent Jones of Okeana, Ohio has tasted victory before in MLF competition with Phoenix Bass Fishing League wins in 2020 and 2021, but winning a three-day event from the back of the boat against stiff competition in the Toyota Series Presented by A.R.E. is next level for the longtime Strike King Co-Angler, who needed more than a decade to finally “get over the hump.”

“I’ve won two BFLs and went to an All-American,” Jones said. “I fished for probably 10 years and had many Top 10s and second places and I always fished scared and fished for a limit.”

“Many” actually equates to 25 Top 10s, which in itself is the makings of a tremendous resume. Add a win at Lake Okeechobee against 270 competitors and a brand-new Phoenix 518 Pro for that win and you’re looking at a co-angling career that stands out.

Jones started off strong on Day 1 with 11-5, but his Day 2 resulted in just three keepers for 5-15 and an uphill battle to make a run at the victory from 13th place. Luckily, he had a great boater and a solid game plan.

“My boater Frank Kitchens had 15 fish before I had one today,” he said. “He ended up giving me his rod and ChatterBait and I don’t know if it made the difference, but maybe it’s a confidence thing. It didn’t spin me out.”

With the ChatterBait in hand, Jones finally caught his first fish by 9 or 10 o’clock and went on a tear from that point forward. His 19-15 was the biggest co-angler bag of the event and gave him a total of 37-3. The big bag was bolstered by a fish he nearly didn’t land but for Kitchens’ literal helping hand.

“My second-biggest fish got wrapped up and pinned down to the bottom of the lake, and I had to basically stick the rod down there,” he said. “It felt soft, and I said, ‘he’s still on there.’ Frank reached down and lipped it underneath the water.”

The key to Jones’ big Day 3 was the cadence with which he worked his ChatterBait, burning the bait and covering as much water as possible.

“If you slowed it down, they did not want it,” Jones said. “You had to absolutely burn it. Fishing it on braid, it was a harder thump. I started out with fluorocarbon, and you could feel in the rod it was just softer. I switched to braid, and I think that might have been a little bit of a difference.”

The proof is in the profit. Jones’ adjustments netted him a win and a new boat, and all that’s left now is digesting the victory and waiting for it to truly hit him.

“It probably will [hit me] on the 18-hour ride home,” he joked. “When I talk to my family for the first time. My phone’s ringing off the hook.”