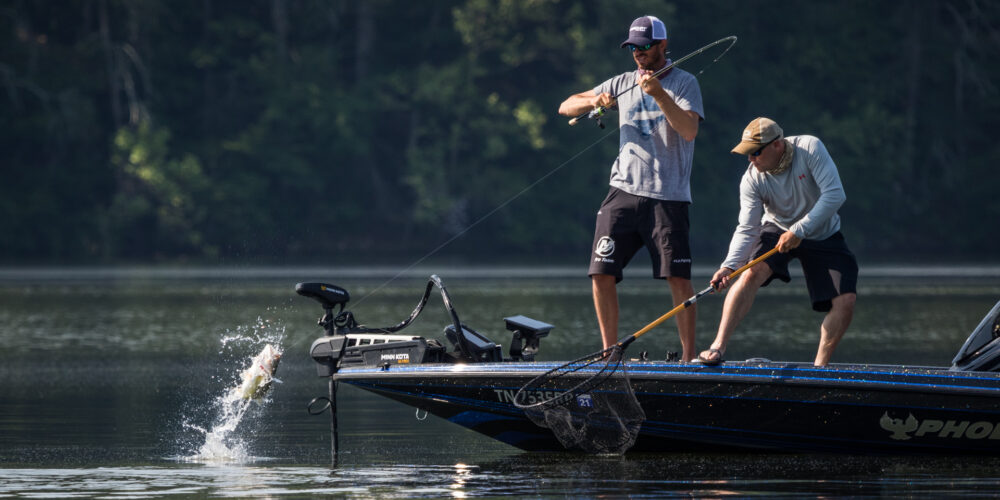 The final weigh-in of the Toyota Series Presented by A.R.E. event on Lake Chickamauga is going to be exciting. Like the first two days, the weather is beautiful, but the fishing is a little less so.

The Top 10 is mixed up all over the lake, with pros fishing within sight of the dam and above Dayton. The techniques are also all over the board, but if you had to pick one bait today, it is probably a wacky rig.

Leader Andrew Nordbye is off to a tough start, with only two fish mid-morning for a total of about 4 pounds. Behind him, some pros are putting together good days, so he’s going to have to catch ‘em to defend his lead.

Starting in second, Jordan Hartman put a limit together by mid-morning for about 13 pounds. In third, Jeff Dyer had four keepers in the ‘well by about 11 o’clock. In fourth, Cody Harrison caught two small keepers early.

Perhaps the most interesting man coming into the day, fifth-place pro Seth Davis might be living up to the hype. With a limit in the boat and two 3-pounders, Davis is one or two big bites away from being terrifying for the leaders.

Behind the top five, pretty much everyone has at least the start of a small limit. The only one with an early limit was Joseph Webster, who tallied about 12 pounds before almost anyone else had a limit. With one of the only big fish of the day, Cody Nichols has a 5-pounder and is primed to move up. That said, he only had two keepers around noon,  so he’s going to need to do some work in the afternoon.