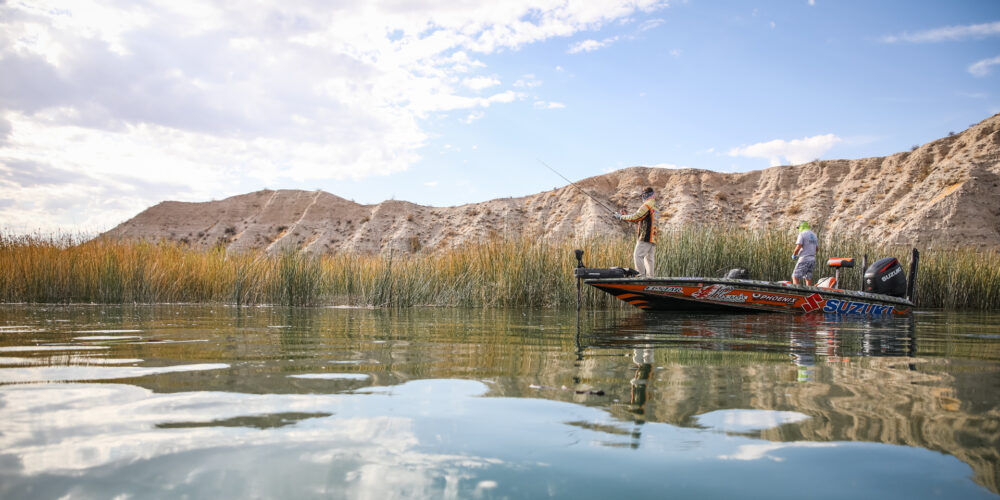 There was a ton of optimism about Lake Havasu’s fall potential. It just needs to show it.

The Toyota Series Presented by A.R.E. Western Division finale, at least for the first morning, has been pretty tough. Of the dozens of pros our on-the-water crew talked with this morning, the only limit encountered was a co-angler, Paul Buccola, for around 8 ½ pounds. Most had one or no fish.

Yet, it wasn’t all bad, as Robert Faaborg and his co-angler Rachel Uribe put on a show this morning, catching six fish between them in minutes, including a 3 ½-pound smallmouth for Faaborg. The stretch he was hitting he figured was just a limit spot, but he said it was producing the best quality he’d seen in weeks there and was obviously thrilled about it.

The leader of the morning, though, was clearly Roy Hawk. Our crew never found him, but we got an update saying he has over 16 pounds, which is far and away the best we heard.

Even better, that optimistic potential was definitely starting to show itself later in the morning for the rest of the field.

Clifford Pirch showed off a 4-plus-pounder that was “the fattest bass” he’s ever seen. No joke, it looked prespawn with how bloated its belly was, and clearly had been gorging itself, as it made an awful mess on his front deck. Unfortunately, he only had one more smaller fish to go with it.

Carlos Garcia wasn’t far away and had the same two fish – a 4 ½-pounder and a small one – sitting in his livewell.

And not to be out done, Angler of the Year leader Phillip Dutra got himself a 4-pounder right as our crew was about to head off. Considering he’d had a tough morning of missed bites, small fish and one lone keeper prior to that kicker, it was much needed, especially as he tries to lock up the title.

Hopefully, those bigger fish later in the morning were a positive omen, because despite the tough bite, the conditions couldn’t have been more beautiful with intermittent clouds and a slight breeze to stave off the heat a bit. Though, Dutra said he needed as much sun as possible to make his bite go.

Two other things to note with the conditions is the water seems to be dropping a bit, with some saying anywhere from six inches to a foot, and a couple pros said the full moon has allowed these bass to gorge at night, which is why the morning bite has been tougher.

So we’ll see how the conditions continue to effect the fishing.

By the way, our crew spent the majority of its time in the basin and the river. So anyone who made their way down towards the dam is a wildcard. Throw never finding some other big sticks, such as Tai Au, who won last year’s event here and the AOY, and don’t be surprised if we see a few bags in the upper teens cross the stage come weigh-in at 2:30 p.m. MT.