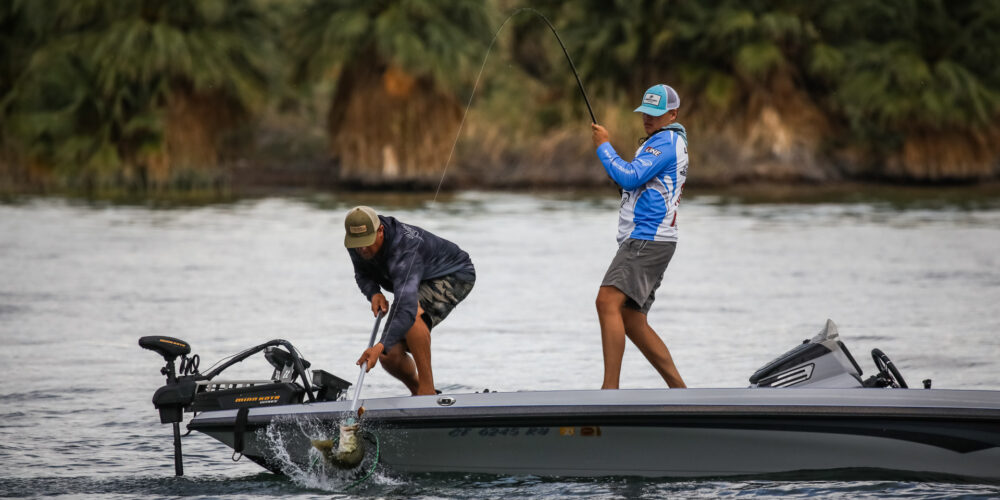 Thisclose – that’s where things stand between the top three anglers.

The finale day of the Toyota Series Presented by A.R.E. Western Division finale on Lake Havasu was basically a three-horse race. Andrew Loberg and Mike Williams were neck and neck out ahead, with Roy Hawk lurking as a dangerous dark horse.

Well, they all seem about neck and neck, now.

The Top 10 was greeted with clouds and intermittent rain all morning, which held off the Saturday pleasure boat crowds … for about 5 minutes longer than usual. But as bad as the waves were getting from all the boats, it was the lack of sun that had most of the anglers concerned.

Loberg said the two things he needed to make his crankbait reaction bite go were sun and slick conditions, and he didn’t have either this morning and it doesn’t look like he’ll have them all day. Thus, it’s been a lot slower going for him, though not from lack of effort, as he broke the lip off a crankbait from snapping it so hard through the weeds. He has been rewarded, though. He’s managed a limit for at least 15 pounds, and that’s despite the fish barely being hooked when they do bite. A perfect example was a 5-pound kicker that sprung loose right as it hit the net. Fortunately, he got that one in, as he’s lost a few more, and he’ll need all he can get.

The reason is Williams is also sitting around the 15-pound mark. Fishing trolling-motor distance from takeoff, he, his brother Mark and a nearby Hawk all were cranking the deep grass there. Mike Williams caught them pretty well early, but as the boat traffic from the ramps began to pick up, his bite seemed to be dying. Though that’s been his pattern, and all it takes is one good flurry as he’s been experiencing for him to cull up big in a hurry.

But the real question is Hawk. He, too, had an early limit with a pair of 4-pounders, but it’s unclear just how much weight he has or where he went after leaving his starting spot near takeoff. Considering his history and the door currently being left ajar by the two anglers ahead of him, it’s not out of the possibility for him to drop a mega bag and take this derby. After all, he’s done it plenty times before as fellow Top 10 angler Chris Kingsley said before takeoff.

Basically, one of those three is going to take home the title. Which one? Well, no one will know until after weigh-in at 2:30 p.m. MT.