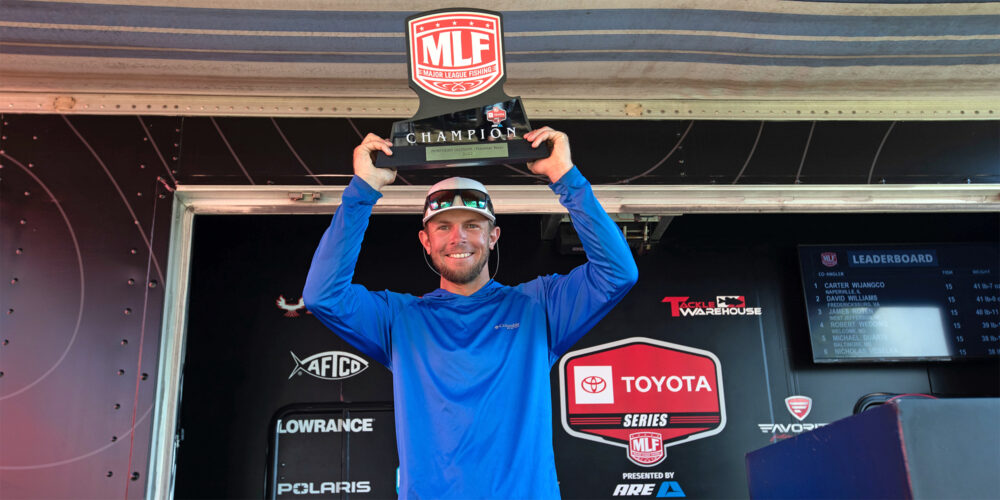 That’s how Harry Linsinbigler IV felt about his chances of winning when he launched out on the Potomac River Saturday for the final day of the Toyota Series Presented by A.R.E. Northern Division. And who could blame him?

He was launching in sixth place, which was not impossible to come from behind – Jacopo Gallelli did it from the same spot in last year’s Tackle Warehouse Pro Circuit event on the Potomac, but Gallelli was little more than 2 pounds back for his comeback. Linsinbigler was almost 7 pounds back, and on a fishery where weights are usually too tight to really make big jumps.

That is, until Linsinbigler did it. While all of the anglers ahead of him faltered, the Florida pro managed the biggest bag of the event – 20 pounds, 14 ounces – to overtake them all with 52-13 total.

“This feels epic,” Linsinbigler said. “I’ve fished for so long and to be able to get here and put myself in position to get up in the front of the boat, and to pull off a win in only my second Toyota Series … words just don’t describe it. I was so far behind that even if I smashed them I figured there was no way I could win.”

Yet, fate seemed to align and say otherwise.

You see, the previous two days the field launched at 6:30 a.m., but today, Tournament Director Mark McWha let the field launch at 6 a.m. That allowed Linsinbigler to get down to his grass flat in Chicamuxen a bit earlier. It was a welcome change, and one that was compounded when Linsinbigler realized the tide was falling off a high tide – the same conditions he caught his fish best in practice, but a tide that hadn’t happened during the tournament. That is, until this morning.

You know what happened from there as the young pro simply lit up the fish right off the bat.

A Different Spin on a Community Hole

Hailing from Florida, Linsinbigler admits he’s hardly a tides expert, outside of understanding it a little from saltwater fishing. But he knows grass well and the two pieces of knowledge truly helped him succeed in one of the biggest community areas on the Potomac.

While the majority of the field that fished inside Chicamuxen headed toward the far back or hung on the inside edges of the grass flats, Linsinbigler opted to stay on the outside of it based on what he found in practice.

“I was fishing an eel grass and hydrilla mix on the outside of the flat,” Linsinbigler said. “I was almost fishing offshore compared to everyone else, out near the mouth.  I had a couple lines through the flat where I was catching better-than-average fish. Band because it was a little deeper, it was less pressured and the tide didn’t always seem to matter as much. I could always catch them on either a swim jig or a Z-Man Evergreen Jack Hammer.”

Linsinbigler also mixed in a frog, especially on the cloudy Day 1, but the vibrating and swim jigs did the majority of the damage.

After being in 45th after the first day and trailing by such a huge amount going into the final day, it truly never even dawned on him he could win. Even when informed during dock talk as weigh-in was getting started he could win, he still didn’t believe it.

And then, it happened.