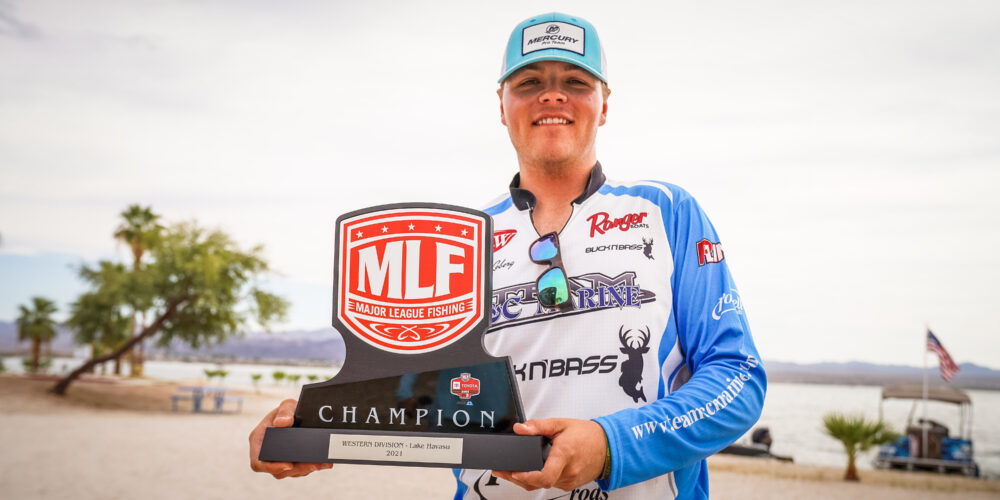 One back-to-back winner. If you didn’t know the name Andrew Loberg, you better remember it now. He’s quickly rising as one of the best young talents in the sport.

Almost two months after winning the Toyota Series event on the California Delta, the young Californian bested some of the top talents on Lake Havasu by dropping the biggest bag of the event – 21 pounds, 11 ounces – on the final day to close out his second win of the season in style, with a 59-14 total.

One thing everyone knows now is he’s one to watch in any tournament he enters going forward. This event solidified that.

Whether it was the time of year, fluctuating water, 100-degree heat or whatever, Havasu’s bass were stingy, regardless of species or where an angler tried to fish. So Loberg decided he wasn’t going to give them the option to bite. Like many of the top finishers, he was going to make them bite.

Fishing a ¼-mile stretch of the north end of the basin, Loberg had a pair of sweet spots on deeper points loaded with grass. But it wasn’t just grass they were loaded with, as he noticed more bait there than anywhere else he’d seen in practice, and even more importantly, more bass showing up on his forward-facing sonar.

“I found that area the first day of practice,” says Loberg. “I caught a big one and one other one, and I just thought it’d be a spot in my rotation. It ended up being the winning area.”

Yet, just because the fish were there didn’t mean they wanted to bite. In fact, Loberg said it was often frustrating seeing so many fish down there simply unwilling to bite.

“I just had to keep winding that crankbait through the grass until I made one react,” says Loberg.

That often meant snapping his Rapala DT 16 when it hit the grass so hard he snapped his line a few times and even broke the lip off one bait. But it took that level of aggression to surprise a bass enough to open its mouth.

That worked out perfect the first two days, as he said he had the ideal conditions of sun and little wind, and the bass were choking his crankbait when they bit. That wasn’t the case today, though. With intermittent rain and wind throughout the morning, Loberg struggled to get bit early, and when he did they were barely hooked. A perfect example was a 5-pound kicker that sprung loose right as it hit the net.

Still, he put eight keepers in the boat today, and they were the right ones to take home the win.

The first is if he can make it three in a row, as he’s headed east later this fall for the Toyota Series Championship on Pickwick.

The second is will his quick ascension go to the next level and turn into a stay out east to fish the Tackle Warehouse Pro Circuit in 2022.

“It’s a dream of mine; one I’ve wanted a really long time,” says Loberg. “I really don’t know yet, but I’ll have to make a decision soon.”