Monroe Slides in Front on Day 2 at the Delta 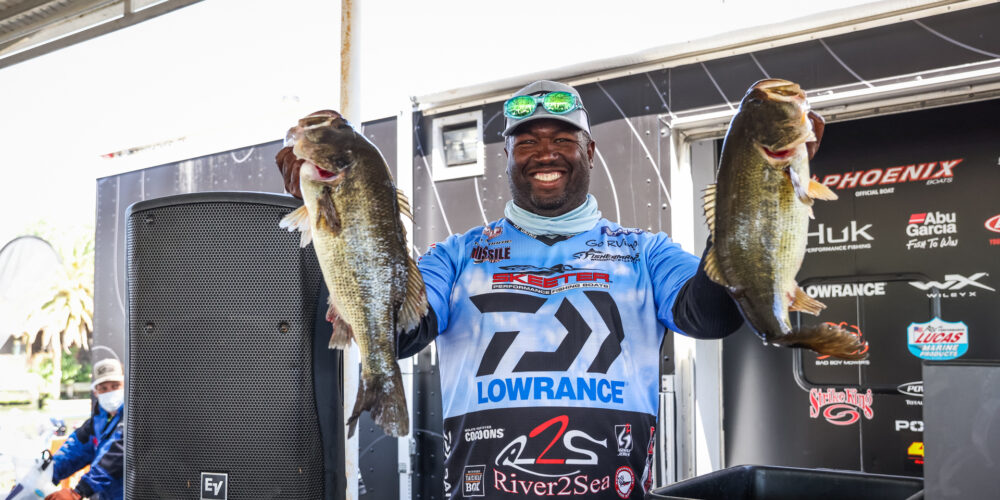 The second day at the Toyota Series Presented by A.R.E. Western Division on the California Delta included some shuffling in the standings as anglers jockeyed for a position in the Top 10.

Day 2 proved to be similar to the first as far as weights go, with seven more 20-plus-pound bags crossing the scale and limits abound. So far, only two anglers have crossed the 20 mark on consecutive, including new leader Ish Monroe, who brought in 23 pounds, 12 ounces, bringing his two-day total to 45-8.

Monroe is no stranger to winning big events on the California Delta. He won last year’s Toyota Series event to go with a 2008 Toyota Series and 2009 Tackle Warehouse Pro Circuit victory on the fishery.

He’s already viewed as one of the “Kings of the Delta” and can further emphasize that if he closes the deal on the final day tomorrow. It won’t be easy, though, as Monroe has a slight 3-ounce edge over Day 1 leader Logan Huntze.

For Monroe, things are going just as planned as his goal at every stop on this fishery is to catch 20 pounds or more each day.

“That’s my goal here every day of a tournament,” he says. “If I get 20 a day and someone beats me, then they did their job.”

With that mindset in place, he let off the gas early on Day 1 but pushed the pedal a little harder today.

“Yesterday, I didn’t even make it to my best area because I already had the weight I wanted for the day,” says Monroe. “I went there today and hit a little more of my juice stuff. I poured it on a little more to try to get some more weight.”

While he has several primary areas, he’s also relying on his vast experience on the tidal fishery and making adjustments on the fly.

“I was driving by a place today and told myself, ‘let’s go in there’ and ended up catching one of my keepers,” says Monroe. “This place has a lot of grass and the key is knowing what to look for. It has to have the right type and mix of grass.”

While he didn’t disclose what exactly he’s looking for, he had no problems sharing his technique this week.

“It’s no secret; I’m flipping,” he says. “That’s what I do best, and I feel good about tomorrow because this is a place I know very well. The wind is supposed to die down some and when the wind stops, they’re gonna bite here.”

After catching 19-10 to take the lead on the first day, Colby Huntze of Discovery Bay, California, added a limit worth 14-11 to expand on his lead. He’ll enjoy a lead of over 4 pounds going into the final day.

Huntze feels good about his day after a slow start to the day that forced him to stay focused.

“I was stuck on one fish for a long time,” he says. “The best bite for me was the afternoon where I caught a 3 and a 5-pounder. That saved me.”

Fishing with pro Grant Parker, Huntze used a combination of different techniques for his fish.

“I caught them on a [Z-Man] ChatterBait, punching and fishing a worm,” he says. “I feel pretty good about tomorrow.”