Mundy Blasts 39-7 to Take the Lead at Sam Rayburn 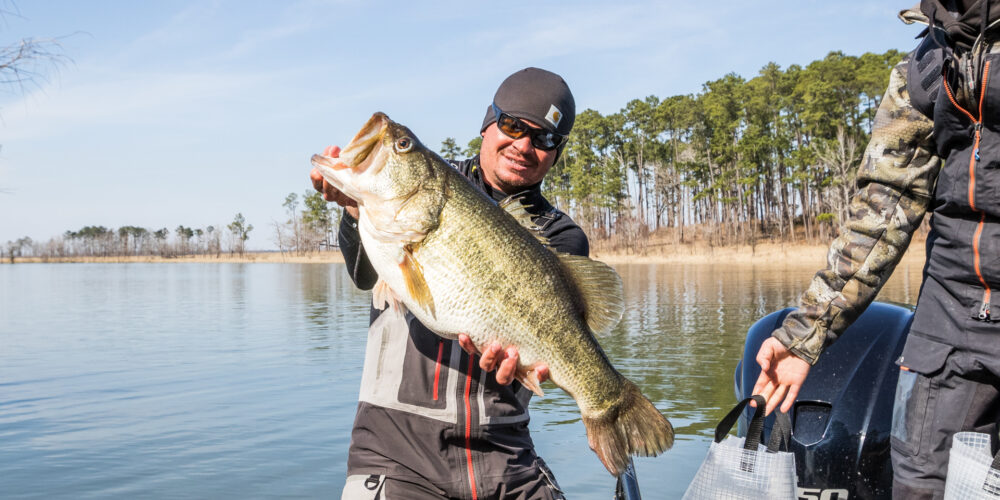 Derek Mundy is in the midst of one of the best months of fishing in history. Back at the beginning of January, Mundy weighed 40 pounds, 10 ounces to win the season-opening Phoenix Bass Fishing League event on Sam Rayburn with the fourth-largest single-day bag in MLF history. This week, in the Toyota Series presented by A.R.E. event, Mundy tallied a pedestrian 12-13 on day one. On day two of the Southwestern Division event, which is presented by Berkley, Mundy dropped 39-7 on the scale to rocket into first place with a 52-4 total.

His bag is the second biggest in Toyota Series history, and his 13-10 kicker is the third-largest bass ever weighed by a pro in Toyota Series history. Additionally, in just under a month, Mundy has become the only angler alive with two of the top 10 biggest single-day weights in MLF history, knocking out one of Greg Hackney’s giant Falcon Lake bags to do it.

“I don’t think the first [40-pound bag] has sunk in yet,” Mundy laughs. “It’s been unreal, for sure. You don’t have no control how big they’ll be down there.”

Things started off tough for Mundy, who is fishing out of a borrowed boat thanks to a blown motor on his. On day one, Mundy ran a good portion of his juice to only scrape together 12 pounds. Big bites eluded him on Thursday, but obviously, that changed today.

“I ran my best stuff yesterday, and I completely forgot about the spot I caught them today until I got back to the ramp,” Mundy says. “So, I thought I’d start there today and it all happened quick. My third cast I caught that 13-pounder and then I doubled a few casts later with my next biggest two.

“That big one came up shaking her head and I knew she had the bait good because I couldn’t see it. All I saw was mouth and I was like, ‘Oh my goodness.’ I didn’t realize she was that big. If she would have come off I would have never said it was a 13-pounder.”

After a fast start, things cooled off in a hurry. Knowing his big start could get him to Saturday if he filled his limit, Mundy headed to the grass.

“I started hustling every grass line I felt like I could get a bite on as fast as I could,” says Mundy. “I fished that until about noon and only had one fish that barely beat the ruler.”

So, Mundy decided to dip back to his offshore honey hole if nobody else was around. Once there, Mundy quickly caught his limit fish and culled his line-burner.

“I actually caught a 4-pounder after that, but I knew those were fish I’d need tomorrow,” says Mundy. “So, I talked it over with my co-angler and he was cool with it, so we came in early.”

With two polar opposite days behind him, Mundy knows his 12-5 lead over Jason Bonds isn’t safe. Still, things are working for Mundy and he’s not ready to get off the ride just yet.

“I feel like I know what it takes to do well [this time of year on Rayburn], but it is hard, hard, hard,” Mundy says. “I actually like the summer better because I feel like I can fish a tournament then without even practicing and do good, and I’m not trying to come off bragging. But this time of year is hard work. A lot of daylight to dark type stuff.

“I’m not scared to zero at all and you can’t be to come out here and expect to win,” says Mundy. “You can’t be conservative on Rayburn at all. You gotta go for bigguns and swing for the fences all day. It’d be amazing to win because I just bought a brand new motor for my boat and it’d be nice to have a little money to cover that.”

After catching 15 pounds, 3 ounces on day one, Heath Ard of Silsbee, Texas put together another limit worth 11-7 on day two to take a 2-2 lead heading into Saturday. With Rayburn being a bit stingy for anglers in the back of the boat, Ard is more than happy with how things have gone so far.

“Man, it was pretty awesome today for me,” Ard says. “I couldn’t have drawn a better partner. [Nick Diberardino] was asking me if I had a preference for what I wanted to fish. Dude, he’s awesome. We didn’t catch a lot of fish, but I caught five. If it hadn’t been for him I don’t know if I’d be where I am today.”

Tomorrow, Ard will be paired with Derek Mundy, so he’ll certainly be around some fish. Now, he just needs one more solid day of fishing to close it out.

“It’s gonna be a grind tomorrow, but I just hope we have good weather and everybody stays safe,” says Ard. “I’m just blessed to be here; it’s awesome.”