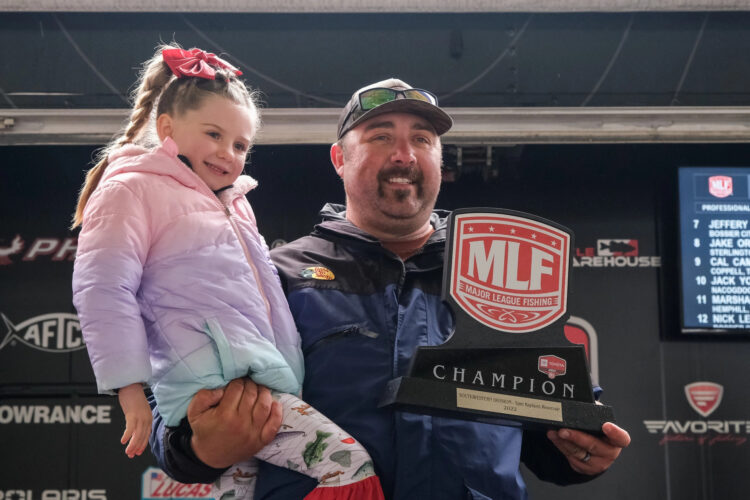 BROOKELAND, Texas – Glenn Webb of Bethel, Oklahoma came out of the gate swinging at the Toyota Series Presented by A.R.E. event at Sam Rayburn Reservoir.  Although he only brought four bass weighing 8 pounds, 8 ounces to the scale on the final day, his huge Day 1 and Day 2 bags and three-day total of 63-12 carried him to victory, earning him the win by a 1-pound, 14-ounce margin over Derek Mundy of Broaddus, Texas. Webb took home the top payout of $54,000 in the first tournament of the 2022 Toyota Series Southwestern Division Presented by Outlaw Ordnance.

“I’ve fished a lot of local tournaments back home, but this is the first time I’ve really ventured out and fished as a boater,” said Webb. “It feels great. It’s super cool to win the first big tournament on my first try.”

Webb said he wasn’t even planning to fish the event, but after a good finish in a local tournament the week before, he decided to take a shot at it and registered.

“I wasn’t really planning on fishing this event at all,” said Webb. “Once I decided to give it a try, I was able to find a link and get in and I’m so glad I did.”

“There were probably more fish there on the final day than there were on Day 2 because they were loading up every day,” said Webb. “I don’t know if it was the clouds, the wind or the light, but something was off, so we had to make some adjustments.”

Webb switched to a Carolina rig late in the final day to catch his four keepers and hold on to the number one spot, returning to Oklahoma with a Toyota Series trophy and a winner’s check.

The Top 10 pros on the Sam Rayburn Reservoir finished:

Ebare took home an extra $1,000 as the highest finishing Phoenix MLF Bonus member. Boaters are eligible to win up to an extra $35,000 per event in each Toyota Series tournament if all requirements are met. More information on the Phoenix MLF Bonus contingency program can be found at PhoenixBassBoats.com.

The Day One Berkley Big Bass $100 award winner in the Strike King co-angler division, was John Hatton of Buna, Texas, with a 6-pound, 8-ounce bass, while the Day Two $100 award went to Joe Landers of Okmulgee, Oklahoma with a 6-pound, 7-ounce largemouth.