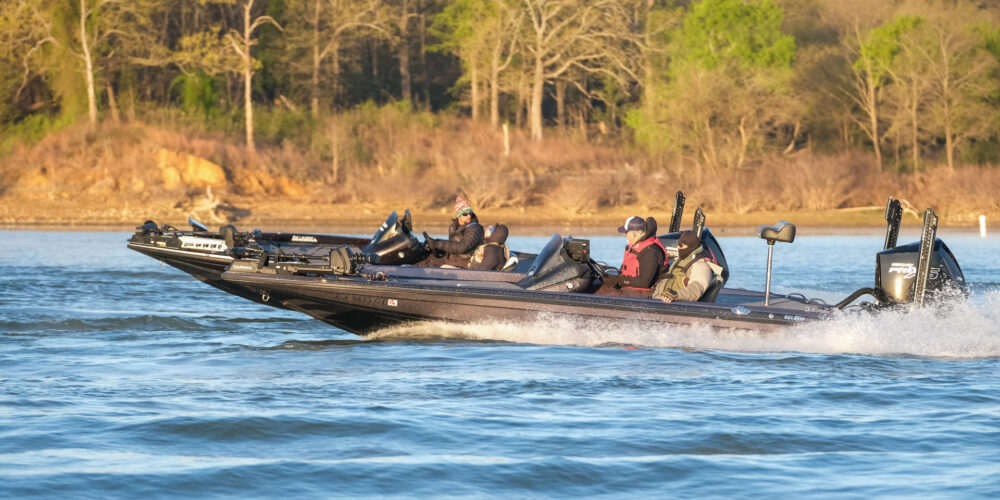 KINGSTON, Okla. – There’s a saying about everyone in Oklahoma wearing hats because the wind will never let you have a good hair day. Well, hats haven’t mattered much this week. They’ve all been blown away, too.

Sustained winds of 25-35 mph, with gusts over 50 mph, canceled the first two days of the Toyota Series Presented by A.R.E. Southwestern Division event on Lake Texoma.

FINALLY, the winds have let up enough for the 164-boat field to get out on the water today. However, it’s a safe bet to say any plans anglers had for this derby are pretty well shot.

Sitting on the border of Oklahoma and Texas, the Red River impoundment is one of the largest reservoirs in the country at roughly 90,000 acres. It also features all three species of bass, though with the fishery’s size, the population seems small thanks to so much water for them to spread out. In terms of structure and cover, it features a diverse mix of points, bluffs, riprap, docks, shallow wood and shoreline vegetation. Anglers can run west to fish stained water or stay closer to takeoff on the east side to try and find something to themselves. But often, most go to the mid-lake and southern end, as the water is clearer and the quality tends to be better.

Big winds and big water don’t mix well, but that’s exactly we got the first two days. Now it’s the aftermath anglers will have to deal with.

Tackle Warehouse Pro Circuit pro Jeff Reynolds said before this event the “whole tournament is going to be dictated by the wind.” He probably didn’t realize just how right he was.

“A lot of peoples’ stuff will not be fishable,” Reynolds said. “The wind will muddy it up.”

After going across the US 70 bridge yesterday afternoon, that’s most certainly the case, as the lake was brown for as far as the eye can see (along with the massive rollers).

Last year’s winner Evan Barnes agreed that the wind was going to be a factor in the event, especially for someone like him who was firmly planning on doing the same thing as he did last year when he won.

“The fish are exactly where they were last year when I won,” Barnes said. “I pulled up on my main spot from last year and the fish were there and look exactly as did they did last year on LiveScope. Now, the only problem is I made a few casts and couldn’t get them to bite. So, I might have to throw something different or come back at the right time, but I know where they’re at and know they’re coming. I’m encouraged.”

Now, both pros said the first wave of spawners is hitting the beds. So, that will certainly come into play for many, but it’s probably going to cram anglers into small areas while trying to look for clean water, which will be at a premium.

Prior to the blowout days, both pros saw 15 pounds a day being really good, especially with the conditions. But while the wind is gone, the other condition to factor in is Saturday’s 340-boat high school event.

“There will be 500 tournament boats out there come Saturday now,” Reynolds said. “And this lake may be big, but it’s not going to handle that well.”

Whatever tactic an angler wants to try, they’re probably going to be happy.

With the fish crashing the bank to begin spawning, look for plenty of pros to look for the clearest water on the south end to target bedding fish.

However, Barnes says there’s still a healthy population of fish sitting just offshore from spawning areas waiting to go, and if an angler can handle the wind, he can get right quick using forward-facing sonar.

“Basically, you’re going to see fish get caught from 6 inches to 20 feet this week and just about anything a guy wants to throw,” Reynolds said.

Transitions always make fishing tough, and these fish are definitely on the verge of a massive transition to the spawn.

Both Reynolds and Barnes said the fishing was really tough in practice, especially when trying to find anything new they could have to themselves.

However, while Barnes feels the fishing might be a little tougher than last year’s event, it is the first week of April and these fish are primed to explode.

“I do know a few guys were really catching them,” Barnes said. “The weights might be similar to last year, but they may be more now because a guy can put his foot on the gas more. So, I’m thinking around 17 1/2 pounds to win.”