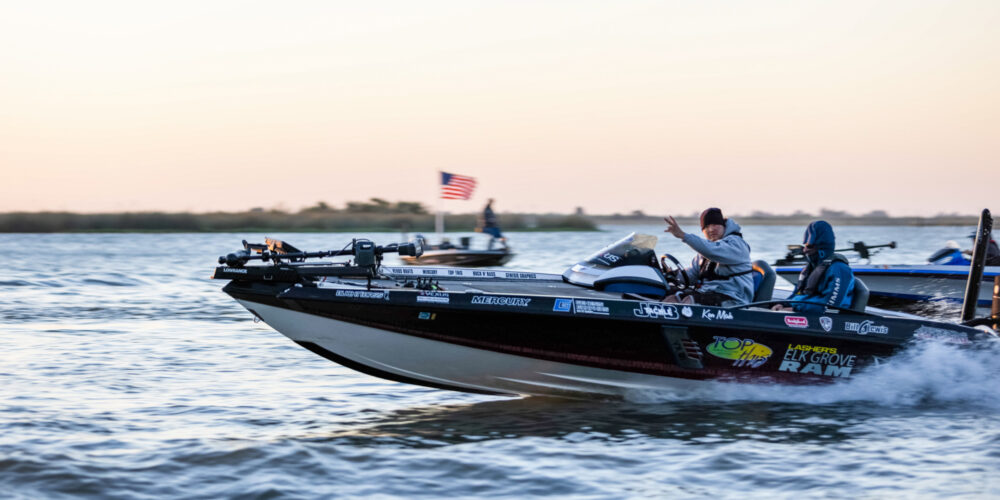 The 2021 Toyota Series Presented by A.R.E. Western Division is underway on the California Delta. Photo by Josh Duke.
May 13, 2021 • Tyler Brinks • Toyota Series

After some reshuffling of the schedule, the famed California Delta will host the kickoff event of the 2021 Toyota Series Presented by A.R.E. Western Division season. The storied fishery has hosted countless Major League Fishing tournaments over the years and offers the anglers fishing this week a real chance at monster largemouth and equally massive bags.

There’s plenty of history for the anglers fishing the Toyota Series. The Cal Delta has made an appearance on the schedule every year since the inception of the Western Division in 2003.

May has historically been a popular month for the annual event, though the last tournament here during May was in 2017. Hunter Schlander won that derby with 57 pounds, 1 ounce.

By all accounts, the fishing should be similar to that tournament, with fish nearing the end of the spawn and big bass feeding up as they recuperate.

Reining California Delta champion Ish Monroe fit this event into his busy schedule between Bass Pro Tour stops in Texas and Florida thanks to a flight home and a second boat he keeps at his house for fishing tournaments on local waters. He should be one to watch after having claimed his second Toyota Series win on the Delta last August with a dominant showing.

Monroe says the fish are in transition and there should be plenty of different ways to catch bass this week.

“There are still some fish spawning, but more of them are done,” he says. “It’s leaning toward a postspawn bite, and the fishing should be good even though they’ve been doing a lot of spraying the grass lately and it is not as good as it should be this time of year. There are fish to be caught every different way, and you can really catch them however you like to fish right now.”

California pro Ken Mah is a Delta stalwart with eight Major League Fishing Top-10 finishes on the fishery. He echoes Monroe’s statements about the spawning phase of the bass for this event and the multitude of ways to catch them.

“There are still some fish bedding and some big ones, but most are done,” Mah explains. “I would estimate that 85 percent of the fish in the system have already spawned, and this event will be more of a postspawn event. It feels like this year is a little ahead and it seems more like a late-May or early-June type of bite.”

“You will see guys doing well punching, throwing a frog and fishing a bladed jig,” he shares. “The topwater bite is also really starting to turn on. That includes walking baits and frogs.”

Tides – As a tidal fishery, the bite and winning weight total often hinge on the tide chart in relation to the tournament hours. Mah says there will be a lot of moving water to kick off the event.

“There’s a high tide early and will be outgoing all day,” he says of the first day of the tournament. “It all depends on what you found in practice because each bite and area you fish will be affected a little differently. Those guys who are looking at fish will want that tide to be lower and sooner in the day.”

Weather – The weather forecast for the week shows highs in the low 80s, but the wind may become a factor. Some projections show wind speeds reaching up to 30 miles per hour.

“If I blows like they’re predicting, there are going to be much lower weights,” Monroe posits. “Everyone will be winding something because the flip bite will be impossible and every protected area will be stacked with anglers. The good news is the weatherman is known to be wrong quite often.”

Mah hopes for the best and is banking on his favorite wind app that predicts the winds to pick up each day after the 2 p.m. weigh-in.

“If it blows in the evening, it won’t do much besides muddy up the water for us when we get back out there,” he says. “If it blows that much during the day, sight fishing and dragging a Senko around is going to be very difficult.”

Kickers – The double-digit bass swimming in these waters are always a factor and will likely play a role in the event and make it much easier for anglers to reach the magical 20-pound mark. Anglers who can find a solid kicker each day will have a leg up on the competition this week.

During Monroe’s latest win, he caught 65 pounds, 13 ounces over three days to win by over 16 pounds. He expects weights to be slightly lower this week.

“I think it’s going to be normal Delta weights where an average of around 20 pounds will win it,” he guesses. “You’ll probably see some weights in the high 20s and backed up by two weights in the high teens. If you can get close to 20 a day, you’ll win or be right there.”

Mah shot a little lower with his guess, thinking 57 pounds will get the win.

“I think averaging 19 pounds a day will put you right there in contention,” he says. “Unless someone is on another planet, 57 pounds will get you the win or at least second place, but this is the Delta, so someone might catch 70 pounds and win it.”