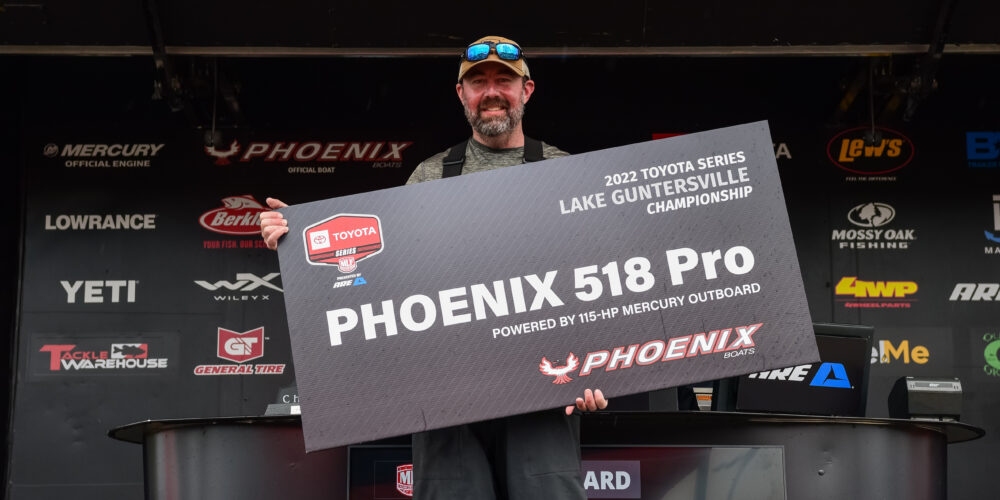 GUNTERSVILLE, Ala. – The memory of last year’s third-place finish is now eclipsed by a 2022 victory for Jason Sandidge, the Strike King co-angler champion at the Toyota Series Championship Presented by A.R.E. on Lake Guntersville. The Arkansas co-angler caught five bass for 16 pounds, 2 ounces on Day 3, giving him 40-6 for the tournament, which was good enough for a 7-pound edge over second-place Jason Swanson.

After finishing third at the Toyota Series Championship in 2021, Sandidge feels elated that he was able to hoist the updated model of the trophy just a short year later.

“I’ve been so close so many times,” Sandidge said with a sigh. “When it’s your time, it’s your time. I understand that now. I knew I needed to fish the conditions and fish my strengths and I would get a win someday.”

Sandidge stays versatile, changing with the conditions and his boaters

In a three-day tournament, Sandidge caught them just about every way you could on Guntersville in the fall. Sandidge was paired with Andy Wicker on Day 1, Brent Anderson on Day 2, and Kyle Hall on Day 3. All three boaters had different ideas on how to catch ‘em, and Sandidge rolled with the punches each day.

“Day 1 for me was all about punching grass so hard that my arms cramped up,” Sandidge said. “Day 2, we ran 50 miles up the river and I caught my limit of spotted bass in like 20 minutes on an Alabama rig. Today, it was about grinding with an A-rig and a topwater. It was just meant to be.”

When Sandidge found out he would be paired with Hall, he was admittedly a little nervous given Hall’s track record with electronics.

“I knew Kyle Hall was going to be LiveScoping, so I knew it was going to be kind of tough for me to fish behind him,” Sandidge said. “Then with the weather changing from sunny to cloudy and windy, I was nervous heading into today. That’s why I was happy to be leading yesterday, but I knew I had work to do.”

But Hall and Sandidge worked well together, both filling their respective limits early on in the day. But even before Sandidge had his livewell full, he began to feel more at ease with his cushion and positioning.

“I caught my third keeper at 9:30 this morning that weighed 5 pounds, so I felt like I had a pretty good shot to win at that point,” Sandidge said. “But I knew we were on Guntersville and a co-angler caught an 18-pound bag on Day 1, so anything was possible. I felt confident, but not really comfortable.”

The Arkansas co-angler weighed in last on the stage and only needed 9 pounds to jump ahead of Swanson. Sandidge cleared Swanson by more than 7 pounds to earn the win and a brand new Phoenix 518 Pro powered by a 115-horsepower Mercury outboard. It was Sandidge’s third MLF win of his career and first since 2017.