Sign Up for the 2022 Toyota Series to Win Big 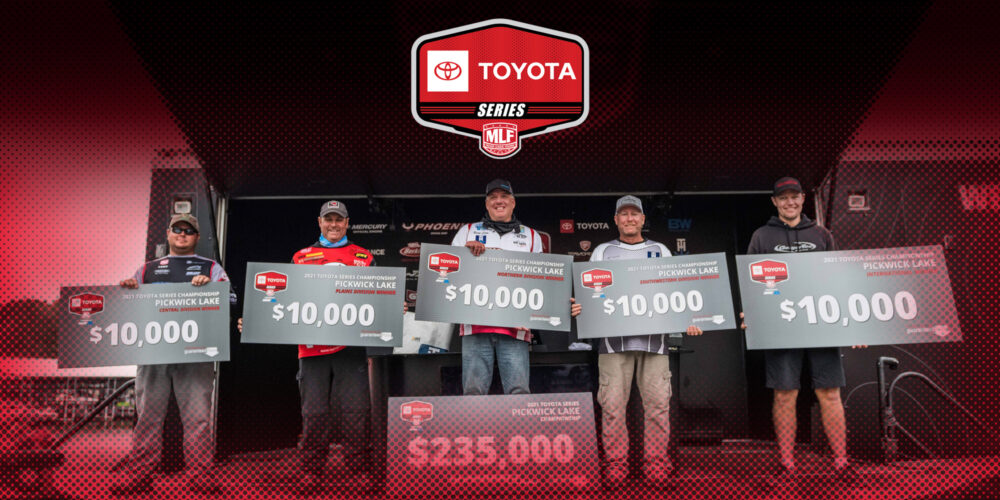 Signups are open for every division in the 2022 Toyota Series Presented by A.R.E., and pros and Strike King co-anglers looking to fish a great regional schedule for top paydays can lock in their plans now. Paying better than any other triple-A competition, the Toyota Series offers the only championship at the level and a schedule that works for everyone.

Bonuses Are Back Again

In 2022 at the Toyota Series Championship on Lake Guntersville, the lucrative and popular highest-finisher bonuses are back. Essentially, the best pro from each division (not counting the Wild Card Division) takes home an extra $10,000 on top of their standard winnings, except for the overall winner, who will pocket $200,000 to $235,000. The second-highest finisher from the division represented by the winner will receive that division’s $10,000 bonus. That means you only have to beat 27 anglers from your division to win $10,000. The pros that took home bonuses this year were Brent Crow, Mikey Keyso, Greg Bohannan, Cody Nichols, Jeff Reynolds, Barry Graves and Justin Kerr.

If you can’t commit to all three tournaments in a division this season, you can qualify by winning any tournament, or advancing through the Wild Card Division. To qualify in a Wild Card spot, you fish four or more tournaments in any combination of divisions and keep your best three events. If you finish the year ranked in the top 12, you’ll be on your way to the championship.

In 2021, the first year with the Wild Card Division, it took good finishes, but not superhuman efforts to make the Championship for a shot at $235,000, including a $35,000 Phoenix MLF Bonus. Tops in the division, Brandon Cline finished 30th in the Central Division with finishes at second, 28th and 159th. Then, he rolled north and qualified with an 18th place finish at the St. Lawrence River. Sneaking into the last spot in the division, Josh Bensema finished 53rd in the Southwestern Division and went up to Champlain for his fourth tournament. Finishing 54th at Champlain, he dropped a sub-100 finish and made it to the championship with a runner-up showing at Sam Rayburn and two finishes in the 50s.

Lock In Your Spot Today

With entry fees remaining flat for 2022, the Toyota Series is poised for another great year. Whether your goal is to get your feet wet in major tournaments, qualify for the championship or move up to fish the Tackle Warehouse Pro Circuit, the Toyota Series is the place to be. To sign up, you can do it online or by calling 270-252-1000.