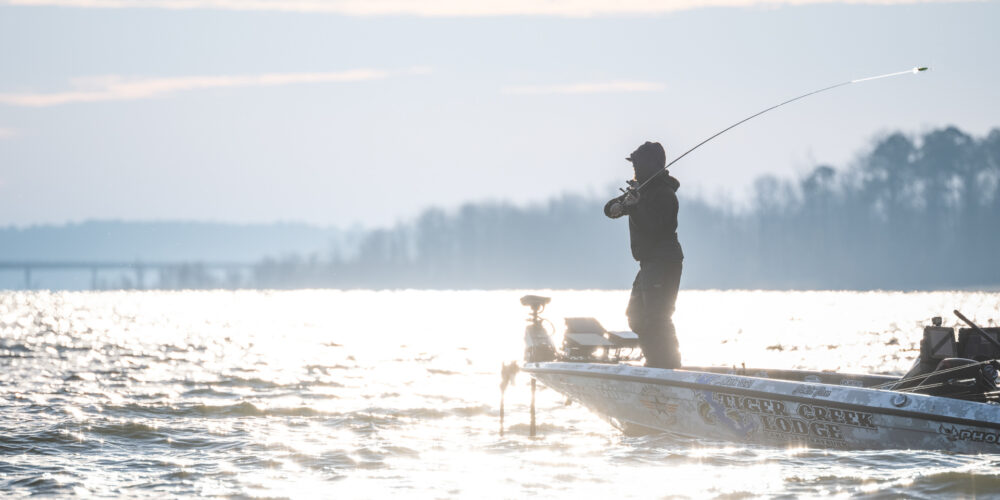 Big fish, multiple patterns and some of the best bass water in the country will set the stage for the season opener of the Toyota Series Southwestern Division Presented by Outlaw Ordnance on Sam Rayburn. Coming shortly after the Tackle Warehouse Pro Circuit event on the same body of water, the tournament should be a good one, and a little farther removed from the potential unevenness of January weather.

Sam Rayburn has a reputation as a phenomenal bass fishery and a giant in the tournament world. At more than 114,000 acres, it’s the largest reservoir contained entirely within the borders of the Lone Star State. The lake is a flood-control impoundment, so it does experience high- and low-water years, fluctuating roughly 7 feet throughout a typical season.

One of the main reasons Rayburn is such a draw for tournament anglers and fishing enthusiasts alike is that it’s an easy 20-plus-pound lake, where limits that weigh in the upper 20s are common. Heck, limits weighing over 40 pounds have become commonplace the last few seasons on Big Sam. It also doesn’t hurt that you legitimately could catch a 10-pounder on nearly any cast.

Lately, Dakota Ebare has been putting his time in on Rayburn for work and play, and he says a good event could be shaping up.

“The water temperature currently is only 58 degrees, it seems to be that we’re having a pretty mild winter,” Ebare says. “If we continue that trend, early February, there’s going to be a lot of fish up and there should be a lot of fish caught.

“The downside is that we still have February to come up, and February is known for being extremely cold. So, there can always be that curveball, which makes it a tricky time of the year. It can be really good, it can be really tough. I think February is better than January, the days start getting a little longer, the fish start to move up. January is pretty tricky.”

Weather depending, Ebare says the signs are still good. Bad weather waylaid the first Phoenix Bass Fishing League event of the year, but he likes the base stats.

“The weights actually weren’t that bad,” Ebare says. “There weren’t any giant bags caught, but about 14 pounds was 20th place. That’s not too bad for a single tournament on the day a cold front blows through. The fish are healthy, they’re weighing heavy, it just depends on the weather.”

For weights, Ebare says you can count on a 15-pound average going a long way. But, like many big hitters in Texas, he likes to shoot for the top end.

“I’m pretty hard-headed when it comes to this lake,” he says. “There’s a lot of ways to go catch good limits of fish. But, I struggle doing that, because I know what it takes to catch the big bags.

“I’m going to be targeting those fish, I’m going to be looking for prespawn fish. The best way I can put it, is finding those fish is like trying to find a needle in a haystack, and 90% of the time the needle isn’t even in the haystack. You hit it right, that’s where you get the big bags of fish on Rayburn. They’re small little feeding window opportunities, and it’s about being in the right place at the right time.”

As far as putting them in the boat goes, Ebare says that you’ve got two schools on Rayburn: offshore to swing big or shallower for consistency.

“Everybody knows the Rat-L-Trap deal is always a big player,” Ebare says. “Even with the lack of grass, I still think the Trap is going to play in shallow water. I think a ChatterBait is probably going to shine even more – the ChatterBait has a way of getting bites, especially if the water comes up.”

Offshore, Ebare says a Carolina rig, a football jig, a flutter spoon and a big crankbait can do damage. Another bait he thinks might do well is an umbrella rig, which can often be good in the winter and prespawn.

Regardless, any bite could be a big one on Rayburn.

“The chance of catching a giant bag, or even a giant bass, is better at that time of year than any other time,” Ebare says. “It’s always exciting going out on Rayburn, knowing you may catch a 12-pounder. You always legitimately have that chance. January and February, that’s the best time to do that.”