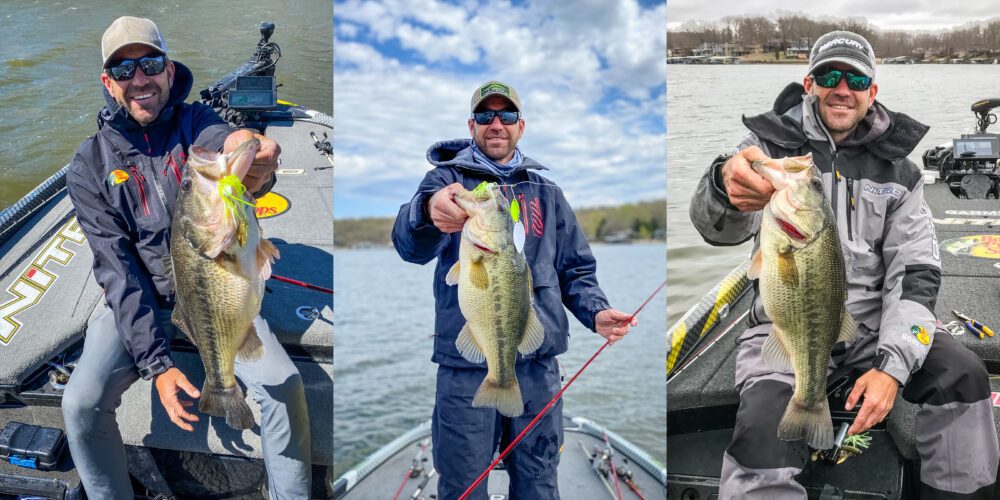 Spring on Lake of the Ozarks is one of the best times to catch big bass.
January 22, 2021 • Jody White • Toyota Series

The Toyota Series Plains Division starts the season March 4-6 at Lake of the Ozarks. A bit of a gem hidden in plain sight, Lake of the Ozarks is likely to kick out stupendous weights in what should be a prespawn or late-winter tournament for the ages.

Lake of the Ozarks

Spanning some 54,000 acres along the Osage River – with Gravois Creek, Grandglaize Creek and the Niangua River tributaries – Lake of the Ozarks is sort of an oddball when talking about major Ozark reservoirs. Unlike Beaver Lake, Table Rock or Bull Shoals, Lake of the Ozarks isn’t as clear, nor does it support the bass species diversity of the others. It’s also more heavily populated, with docks all over the place. Lake of the Ozarks is known for producing monster bags of largemouths – especially in the spring.

Lake of the Ozarks is dominated by hard cover, and docks take the cake for the most abundant structure. Brushpiles and laydowns are also commonplace throughout the lake, coupled with bluff banks and 45-degree shorelines, and they’ll all see action in this event.

Tackle Warehouse Pro Circuit pro Casey Scanlon guides on Lake of the Ozarks and knows that we could be headed toward an event with epic weights.

“The first week of March is a little iffy weatherwise, you don’t know if you’re gonna see the lake really show out,” Scanlon says. “But, we’ve had a pretty mild winter, and they’ve been chewing all winter, so I would think we’re gonna see a pretty good tournament come March.”

With water temps in the 40s in all likelihood, Scanlon thinks the whole lake will play for a winter or prespawn bite.

“We’ll be in a winter or prespawn mode,” Scanlon says. “Fish will be staging up, but still a month off from really making a hard push. So, you’re talking umbrella rig, jerkbait, crankbait, spinnerbait. There will be fish caught extremely shallow, and fish deep on the bottom and suspended. The lake has been fishing pretty diverse this winter. It’s fished better this winter than it has in a while, so I’m thinking it will be a really fun event.”

Historically, in fall events on Lake of the Ozarks, anglers have ranged far and wide over the lake, with winning bags coming from way up the river to right near takeoff. Scanlon expects that to be the case in the spring as well. But, he thinks that the docks will be less important than they often are in the fall.

“The fish are going to be, in general, more bank-related as opposed to dock-related,” Scanlon outlines. “We’ve been there a lot in the fall, where guys are fishing deep around those boat docks, and I’m not saying it’s not going to play, but normally it’s a more visible cover, hard bank fishing. Brushpiles and things like that are definitely going to play, but you’re gonna see more guys fishing behind docks, targeting laydowns and doing typical prespawn stuff. It might make it easier for guys out of town to not get swallowed up by boat docks.”

Though not having to worry about the endless docks on Lake of the Ozarks is a bonus, the real bonus is going to be the fishing.

“If we get some good weather for that tournament, A-rig or no A-rig, 25 pounds is usually the mark that time of year,” Scanlon says. “I’ve fished tournaments the first week of March with no A-rig that have taken 32 pounds to win. It’s going to take over 20 a day, I don’t think we’ve seen that in any of our fall events, it’s gonna be a good one.”

Spring on Lake of the Ozarks means there should be an excellent crankbait and jerkbait bite, and you can never count out an umbrella rig that time of year.

“For sure, the Trophy Bass Company Ozark Flash spinnerbait is a staple down here, and it’s gonna be a player in that event, especially if we get water temps closing in on the 50s,” Scanlon says. “A ½-ounce Trophy Bass Company Trophy Pro Jig is a good all-around size for a jig, but you’re gonna see finesse jigs and bigger jigs out deep. A wide variety of jerkbaits will work, I’m going to be throwing a Tackle HD jerkbait, they’ve got a new one coming out. It’s going to really be an Ozark-type tournament, which means baits like a Wiggle Wart or SPRO RkCrawler will play.”

While there are tons of baits that will catch fish in this tournament, any way you slice it, March on Lake of the Ozarks should be a power-fishing dream.