St. Lawrence Once Again to Show Out, Decide Champion 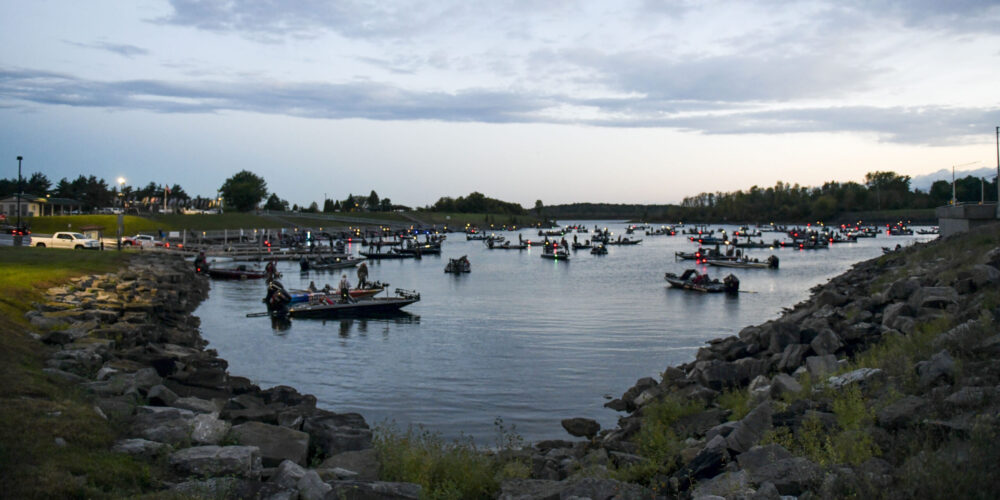 MASSENA, N.Y. – Haven’t we done this before? It’s OK to think that because, yeah, we have.

The St. Lawrence River is becoming a familiar destination to finish a season, what with the Tackle Warehouse Pro Circuit just finishing up the Tackle Warehouse TITLE here last month and now the Toyota Series Northern Division is set to cap off its season here for the second time in four years.

Of course, no one is complaining. There are few better places to get spoiled catching giant smallmouth or spoiled, in general, catching so many bass – and September is a lovely time to do it.

This marks the sixth time in seven years the Northern Division has visited the St. Lawrence River. And if that wasn’t enough, the Tackle Warehouse Pro Circuit has visited back-to-back years, including this year’s TITLE. Needless to say, anglers should be pretty familiar with the fishery by now.

Both Lake Ontario and the St. Lawrence offer some of the best smallmouth fishing in the country. While 5-pound-class smallies can be caught throughout the river and lake, Lake Ontario is where most turn their attention for 25-pound-plus limits of fish. Unfortunately, the lake is off limits, but don’t be surprised to see anglers make the 90-plus-mile run to “the line” where the river meets the lake to get as close as possible to the best fishing. Of course, weather can throw a wrench in the plan of those who want to run that far, as wind, particularly an east wind, can turn a long run into a very long run.

That said, the river is no slouch, as it has endless amounts of places for big smallmouths to call home – and even some big largemouths. On the smallmouth side of things, sharp breaks, rock piles and both deep and shallow flats offer smallmouth options. And for those that want to hunt largemouths, there are numerous grassy bays and docks for them to call home. For an angler in search of bass, just pick your strength and have at it.

Smallmouth and cloudy weather are not exactly simpatico. Fortunately, after an entire week of clouds, it looks like both the bass and anglers should be treated to some gorgeous, sunny fall weather … once they get past today’s rain.

A significant cold front hit last night and will linger into today, which could make things pretty stingy for the anglers (and particularly unpleasant for those making the long runs in the rain).

Spencer Shuffield knows all about these types of conditions.

The Northern Division Angler of the Year leader coming into this event, Shuffield won the TITLE a little over a month ago by battling through conditions just like today’s on the final day of the championship. So, he’s certainly not fazed by the conditions, especially with how many fish he’s seeing on his forward-facing sonar.

“The fish are everywhere,” Shuffield said. “I’m seeing way more than when I won the TITLE last month.

“Only problem is, they’re not biting.”

He’s not sure if it’s the weather, time of year, fishing pressure or if his daily timing is off; however something has the fish super curious but not hungry. By that, he says if the fish were truly turned off, he could see them not react to his lures on his Garmin LiveScope; they’d just swim off. Instead, he says they’re “screaming” towards his lure, only to never open their mouths.

“They’re screaming over to my lure like they’re going to take everything I own, and then just not eat it,” Shuffield said. “When I won the TITLE, if I threw at 10 fish, I’d catch five. Now, I must’ve thrown at 30 since we’ve been talking and haven’t caught one. It’s like one for every 100 fish.”

That doesn’t sound promising. However, Shuffield also did some fun fishing on Lake Ontario prior to the event and witnessed the same thing, only for windows to open up where the fish would start chowing. He’s thinking that may be the case again this event.

With that, he says he’s committed to fishing out deeper like he did when he won the TITLE – probably even a little deeper than he fished in August – but he said to definitely watch out for the shallow guys. The shallow bite didn’t really materialize at the TITLE, but the flats around Wolfe Island are usually good for at least one Top-10 finisher come the fall.

Drop-shots, Ned rigs, tubes, jerkbaits, swimbaits, spy baits, hair jigs – like death and taxes, you can pretty much guarantee all of these will be held up in the Top 10 baits gallery after this event. For as temperamental as smallmouth can be, they sure like the classics when it comes to meals.

That said, the technique sure to get the most attention is the drop-shot. In fact, nearly every angler who made the Top 10 in every event over the last few years has relied heavily on a drop-shot, and that shouldn’t change this year, especially considering how efficient it can be in the swift current of the St. Lawrence.

Look, it’s the St. Lawrence River in the fall. There are going to be a lot of fish caught, including multiple 20-pound bags. That’s just the way of life here, where you don’t typically win unless your bags consistently start with the number two.

Shuffield figured that even with his odd-acting fish that the numbers he was seeing meant he’d be bringing in 20 pounds a day. However, smallmouth can still break your heart and get finicky, as Shuffield has talked to other pros who are struggling to crack the 15-pound mark in practice.

Is that because most guys already know their areas and are laying off their good stuff? Shuffield thinks so, but still, between the clouds, the front and transitional time of year, he said some guys may struggle more than usual during this event. Considering he wants to cap off a banner season – TITLE victory and near AOY on the Tackle Warehouse Pro Circuit – with the Northern Division AOY, that’d be just fine with him.

“I definitely wouldn’t mind winning AOY,” Shuffield said. “I want to win AOY no matter what division I’m fishing, whether it’s the Pro Circuit or the BFLs. Hopefully I can finish off a great year with it.”