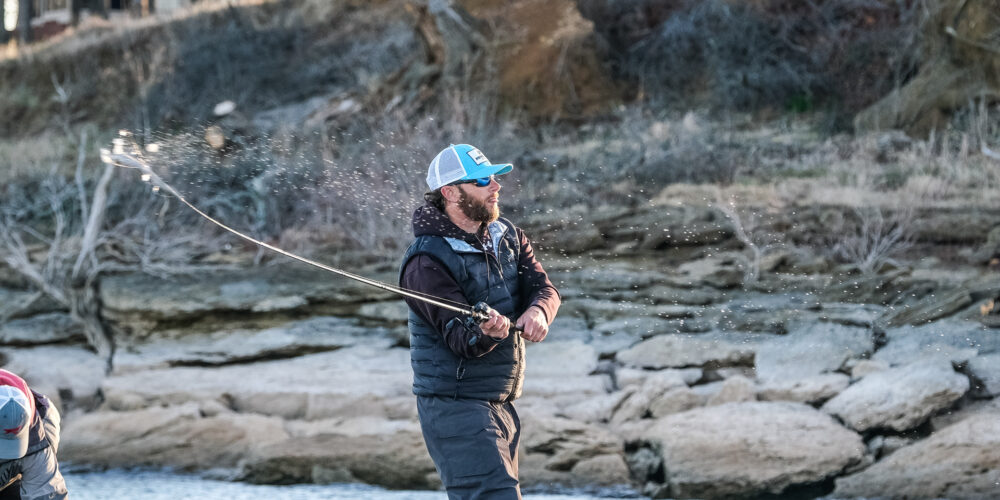 Day 2 of the Toyota Series presented by A.R.E. Southwestern Division event on Lake Texoma has been much better from a weather standpoint, though the fishing still isn’t up to par. Sunny, clear skies set the scene for most of the day so far, but with water temperatures still in the mid- to low-50s across the lake the fish just aren’t firing yet.

The good news, however, is that our on-the-water crew has spent the majority of the day tracking down the top pros and most of them have fish in the boat.

Our leader, Evan Barnes, has been working his program of trying to catch largemouth and smallmouth on a A-rig and swimbait. We stuck with him for a bit early this morning and when we left him he had three fish for about 7 pounds.

Fishing shallow, dirty water, Tommy Dickerson has four fish in the boat. He told our reporter that he missed his fifth fish, which hopefully doesn’t come back to haunt him in a tough event like this.

Justin Patti was focusing on some docks and deeper stuff down the lake, which is how he caught most of his fish yesterday, but had yet to box a keeper when he saw him.

Mitchell Webb started the day in fourth and had continued his pattern of running “high-percentage spots” he knows of from past history on Texoma. He only got six bites yesterday and seems to be on that same track today with two in the livewell – with one close to 6 pounds.

Fifth-place pro Blake Schroeder is also tossing a A-rig and as of mid-morning had a pair of 2-pounders to show for it.

The good news for the top pros, as well as the rest of the field, is that the high temperature today is supposed to push near 80. With a lot of quality fish caught yesterday afternoon, you can almost bet there will be some magic that happens within the last hour of fishing.

It’s cut day and the top 10 pros and Strike King co-anglers compete tomorrow. Tune in to the live weigh-in starting at 3:30 p.m. CT to see who makes the cut to fish on Saturday or who goes home.