Thrift Moves Ahead After Day 2 on Champlain 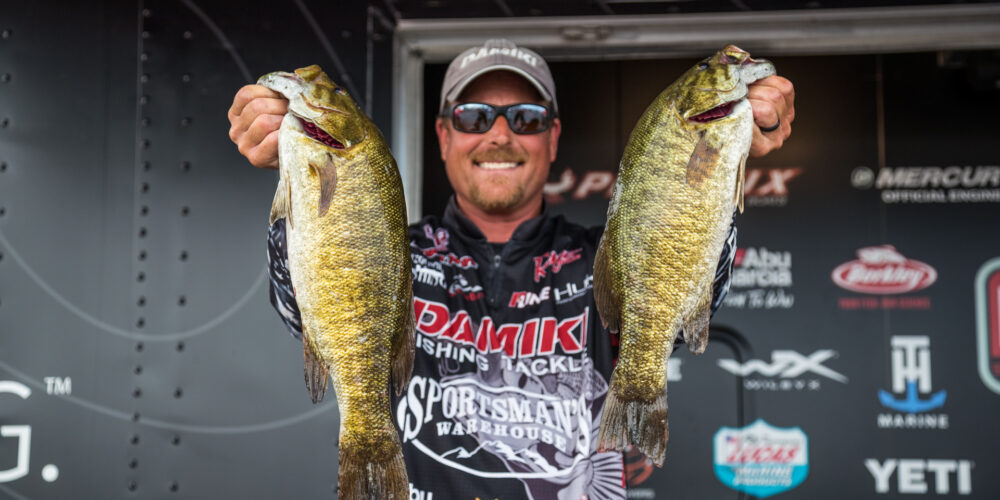 To say Bryan Thrift has struggled on Lake Champlain doesn’t really do him justice, but for a while, a lack of sterling success on the big northern lake was part of his rep as a great southern angler that hadn’t quite solved smallmouth. In 2016, Thrift finished 11th in the FLW Tour event on Champlain. Since then, he’s basically dominated everyone on Champlain, knocking out top-five finishes like they’re docks on Lake Norman and leaving the locals scratching their heads.

Day 2 of the Toyota Series Presented by A.R.E. Northern Division event on Lake Champlain was as much of a good time as Day 1, with a pile of bags in the upper teens brought to the scale. Thrift naturally cracked them as well, putting 19-7 on the scale to move out of a tie for first into sole position of the lead. His last win on Champlain came in the 2019 FLW Series event here, and with a 9-ounce lead over Stephen Estes, he’s poised to go back-to-back.

Staying north and actually weighing one largemouth today, Thrift is all over the place like usual.

“Today started out a lot slower. I caught a 4-pound largemouth on like the third cast, so from that perspective it was good, but from then on it was slow,” says the Shelby, N.C., pro. “The place where I caught all my weight yesterday, I only caught three there, and they were a lot smaller. I just ran around. The wind laid down and I was able to run a lot of stuff and just get a bite here and there.”

“Finally, toward the end of the day, I picked up a walking bait and caught two 4-pounders and a 3 3/4 on that,” Thrift says. “I caught 8 pounds on one cast. I can’t believe I got them both in.”

If it was any other angler, you’d call a double on a topwater fate, but with Thrift, it’s just about par for the course. On the final day, he’ll roll out for a shot at his 12th MLF win and a chance to go back-to-back up north.

“I’m happy I get a shot at it; it’d be pretty cool. It only took me 15 years to figure this place out,” Thrift jokes. “I’ll stick with the same plan tomorrow, and I’ll probably run some stuff I haven’t fished yet and mix in some new stuff.”