Toho and Kissimmee Should Show Out for Southern Division Anglers 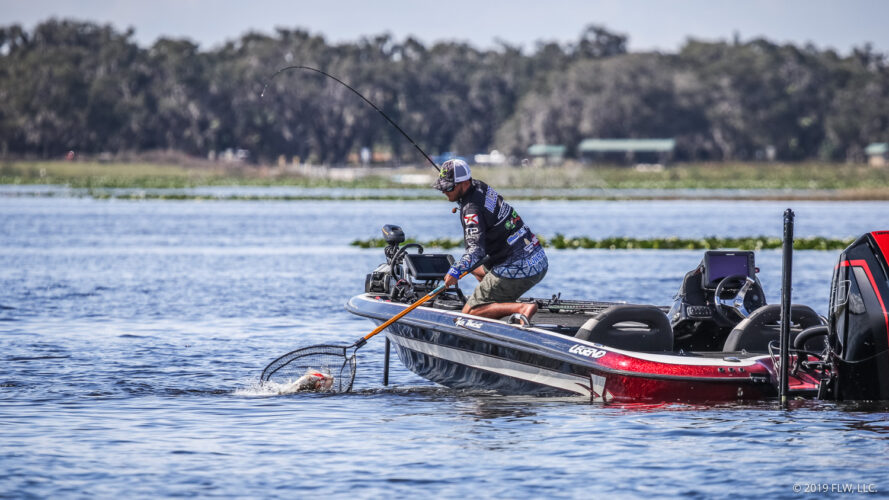 The Toyota Series presented by A.R.E. Southern Division kicks off its season February 4-6 on Lake Toho for what is sure to be a year filled with big bass. The event, which is presented by Googan Baits, gives anglers the run of the Kissimmee Chain at a time when the whole system is fishing well, so it should be a great start to the annual Florida swing.

Lake Tohopekaliga (Toho for short) is the first of a series of lakes on the Kissimmee River south of Orlando. At the south end of Toho, a lock and a series of canals leads to Cypress Lake, Lake Hatchineha (Hatch) and Lake Kissimmee, which are all fair game for the pros. Connected to Kissimmee, Tiger Lake and Lake Rosalie are also legal waters, and at least Tiger is fairly accessible and has played in the past.

The Kissimmee Chain of Lakes offers typical Florida fishing, with offshore hydrilla and eelgrass, shell beds, and tons of shallow vegetation to wind and flip. Kissimmee grass and pads are the predominant emergent cover, and hydrilla is the predominant submerged grass.

Over the years, everything from sight fishing to flipping and fishing offshore has won on the chain. So, it’s hard to say ahead of time that one particular pattern can be banked on ahead of the other Florida staples.

Tackle Warehouse Pro Circuit pro Tyler Woolcott has an intimate knowledge of Toho and the surrounding waters and finished 10th there when the FLW Tour hit Toho back in 2019.

“It’s Florida, so it’s either going to be a slugfest or it’s going to be a grind and a couple people will do good,” Woolcott says. “If we get a cold front, the fish are going to shut down and stage up somewhere and be harder to catch. They’ll get under mats and hydrilla, and you’ll catch some bucks shallow, but the big, smart females will hunker down somewhere. Hopefully, that’s not the case and we get some good weather and there are a lot of fish up shallow and it’s a big ol’ slugfest.”

In 2019, the FLW Tour event highlighted the offshore hydrilla in Toho, with a ton of fish caught far off the bank. The eventual winner, Buddy Gross, beat out the sight-fishing prowess of John Cox with a strictly offshore pattern. This year, Woolcott doesn’t think the offshore grass will play quite as much.

“There’s definitely some good hydrilla on Toho, but not near as much as when we were there for the Tour,” Woolcott says. “There’s some fish in it, but it’s not like they’re everywhere. It’s kinda like that Buddy Gross deal, if you find a hole or a point or a hard spot they’ll be grouped up. It’s good stuff to look at.”

Unlike Okeechobee, where the options are roughly north or south, anglers will need to pick between a variety of patterns and lakes. This year, Woolcott says that Kissimmee looks particularly good.

For a winning weight, a lot depends on the weather, but even in the cold, Woolcott says the lakes are primed to produce.

“If it sets up perfect, it could take 80 pounds for a maximum I would say,” Woolcott shares. “Minimum, I think it will take 60 pounds. It’s starting to get really good now, and even when it is cold, you can catch big bags flipping.  So, even if it’s not really good conditions, there will be good weights.”

When it comes to Florida fishing, the weather dictates the patterns in play to a degree, but there are also a handful of baits that just work regardless in the Sunshine State.

“If it’s cold, you’ll have offshore hydrilla play, and rattle baits and vibrating jigs will play,” Woolcott says. “A 13 Fishing Magic Man is what I like to throw. And you’ll be able to drag a worm slow, like a 13 Fishing Big Squirm.

“If it’s warm, you’ll be able to do anything you want up shallow,” Woolcott adds. “You can throw a worm, wind or flip. If the weather is right and they’re spawning, the 13 Fishing Bubble Butt is an awesome bait. It’s a Senko-style bait with an air pocket in the tail and it’s perfect for bed fishing.”

Additionally, swim jigs, spinnerbaits and even some hard baits can play. Prop baits like a Smithwick Devil’s Horse are a tradition in Florida, and not often seen in play elsewhere. Regardless of the bite, there are sure to be a few giants brought to the scale – Toho and Kissimmee have some of the biggest bass in Florida swimming in their waters.