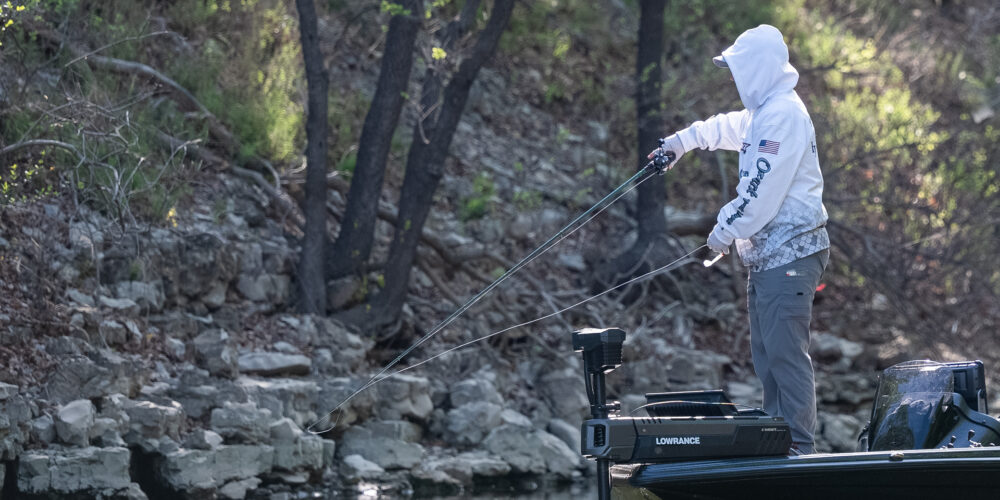 GROVE, Okla. – Spring is in the air in Oklahoma, and the bass in Grand Lake are headed to bed. While the conditions didn’t allow stop two of the Toyota Series Presented by A.R.E. Plains Division to become a true sight-fishing showdown, combing the shallows for the right fish certainly became the key to success.

Sticking to his guns, Jeff Reynolds weathered a tough morning bite and picked up critical fish just minutes before weigh-in on Days 2 and 3 to walk away with the title. He caught all of his bass sight-fishing this week, flipping a  Reaction Innovations Sweet Beaver to bedding fish tucked behind docks.

Here’s how the rest of the field stacked up behind him.

Coming up less than a pound short, Cade Alsbury followed suit–sight fishing for bass in shallow pockets. Clear water was key, as he needed the visibility to target the right fish.

“I caught everything that I weighed in sight fishing,” Alsbury said. “All of my fish were in 0 to 3 feet of water.”

He was arguably the most consistent angler of the tournament, weighing in solid bags across all three days. This may have been a tribute to his ability to find the right fish. Catching a limit early on Days 1 and 2 allowed him to go looking in the afternoon.

“It was pretty simple, I was covering water,” Alsbury said. “I started out Thursday with 80 or more waypoints. Some of them disappeared throughout the week, and I gained some more.

When he found the right fish, he put a Texas-rigged YUM Christie Craw and YUM Dinger to work, flipping right into the bass’s home turf. The strategy paid off to the tune of $15,500.

Barely sliding down to third, Kyle Schutta relied on his intuition – not his eyes – to fill great limits across all three days of competition.

One area came in clutch for Schutta, allowing him to spend more time fishing and less time running – a key advantage on such a large body of water.

“I was fishing steeper banks in one cove,” Schutta said. “I caught 90% of the fish I weighed out of one cove. I just rotated about a mile-long stretch over and over the past two days.”

He was able to narrow that area down even further, targeting rock transitions in 2 to 4 feet of water with a 3/8-ounce homemade jig.

“The fish were definitely on the transitions of rock, where it went from chunk rock to pea gravel,” Schutta said. “That was where a lot of the bites came from.”

4. Harlin Goes All-in on His Eyes

For Michael Harlin, the decision to go sight-fishing this week was an easy one. It paid off with a three-day total of 52 pounds, 11 ounces and a fourth-place finish.

“I got here Saturday, put the boat in on the lower end, and before I even got in my boat I saw two fish over 4 pounds on nests,” Harlin said. “Right then I decided I was chips-in on the shallow fish.”

He spent most of his time in clear water this week, targeting bass from Drowning Creek to the dam. His key bites came dragging a  Strike King Rage Bug and flipping a Big Bite Baits Fighting Frog.

“The first day I caught 20 keepers dragging a Rage Bug. The second day I that bite died, and I had to go back to flipping beds,” Harlin said. “I ended up catching nearly every quality fish sight-fishing. Bed fishing was always the game plan.”

After holding a commanding lead on Day 2, Northwest Arkansas resident Nicky Parsons saw his bite dry up on Day 3. Spending most of his week in dirty water, he still caught enough to hold on to a Top 5 finish.

“I was mostly fishing the deeper spots from the middle to the back of coves,” Parsons said. “I think pulling that water had the fish pulled out. They want to spawn awful bad, and a lot of them are on the beds.”

He found it important to target key spots, and not to waste any time on unproductive areas.

“I was just fishing inside the points where it would dive off a little deeper, and that’s where they’d want to be,” Parsons said. “I’d just buzz through the other stuff to get to where you wanted to fish. It’s pretty easy to tell where they’re supposed to be.”

“When you’re throwing a worm or something with a larger profile sometimes they’ll just grab a piece of it to get it off the bed, and don’t get the whole thing in their mouth,” Parsons said. “Fishing a smaller bait allows for more opportunities to get the hook in them.”

Curt Warren came in sixth, bringing 47 pounds, 14 ounces to the scales across three days. He went deeper than most, targeting fish he knew were there but couldn’t see.

“I was bed fishing for every one I caught,” Warren said. “I lost some good ones, you could see the bed but couldn’t see the fish. It was either too deep or there was too much pollen in the water.”

He stayed in one key area, preferring to spend more time fishing and less time looking.

“I finally found an area in practice where there wasn’t a ton of boats,” Warren said. “I knew big fish spawn in there so every day I tried to add to it a little bit. I did my best to stay within a mile of where I wanted to fish so I wasn’t running all over the lake.”

He threw a heavy 5/8 to ¾ oz Bass X jig, looking for a reaction strike from bedding bass.

“I think big ones were in down in 5 to 6 feet of water, I don’t think they were up shallow,” Warren said. “You could see the few fish on beds shallow, but they were too spooky and you couldn’t catch them or they were too small and wouldn’t help you.”

7. Moving Baits Pay Off for Kitts

Local angler Kyle Kitts covered more water than the rest of the Top 10, putting his trolling motor down and a spinnerbait to work in muddy water.

“I was throwing behind docks and wood when I could find it,” he said. “I think some of my fish were on beds, but honestly I think they were across all three stages of the spawn.”

Kitts stuck around mid-lake, using the water conditions to his advantage. Low visibility was key to triggering reaction bites.

“I couldn’t see them, I was seeking out the dirtiest water I could find,” he said. “I was fishing fast, but slow. I was moving a lot but staying in one area.”

His local knowledge and willingness to go against the grain paid off to the tune of $7,000 and a Top 10 finish.

Orlean Smith drug a  Buckeye Lures Ballin’ Out 2 Jig all the way to eighth place with a total of 46 pounds, 6 ounces. He began the event fishing shallow, but had to switch things up mid-tournament.

“I started out fishing really shallow pockets and shallow flats, any kind of little indention in the bank that was really shallow, there were a lot of fish in them,” Smith said. “That’s how I caught 18 pounds on the first day. Then about noon on Day 2 – I don’t know what happened to those fish, but I wasn’t able to get them to bite. I ran new water the rest of the time.”

Switching up his strategy, Smith made a move to clear water but still didn’t try sight-fishing.

“I’m just fishing spawning coves,” he said. “I was in relatively clear water but I wasn’t making any effort to see them. I think a lot of them were transition fish, prespawn or postspawn.”

The switch worked, and Smith was able to scrap out sizeable limits on Day 2 and 3 – enough for a $6,000 payday.

Starting the event on top, Jeremy Johnson watched his championship chances blow away with the clouds on Day 3. Spending all of his time in stained water, Johnson found success on the first two days slow-rolling a spinnerbait.

“The south wind was hitting the banks I was fishing on Day 1 and Day 2, that was key,” Johnson said. “The stars aligned and it just all set up right.”

While he couldn’t see them, Jeremy also believes that the spawn is in full swing.

“I think it’s 100% dead-smack in the spawn,” he said. “I think most of the fish are on beds, but I wouldn’t doubt I was catching pre and postspawn fish too.”

With changing conditions on Day 3, Johnson tried blind-casting to beds, but ended up finding himself in the dark.

10. Bonds Eyes up Second Toyota Series Top 10 of the Season

Rounding out the Top 10, Jason Bonds bagged a three-day total of 44 pounds, 12 ounces. He stuck to the script, sight-fishing for most of his bass.

“I’d say 80% of my fish came from sight fishing,” Bonds said. “The rest of my fish I’d get lucky with the jig, throwing to likely spots and catching a transition fish.”

He covered a lot of water, fishing from Honey Creek all the way down to Ketchum. Bonds did his best to stick in stained water, in hopes that he’d find fish the competition didn’t.

“I ain’t no dock flipper, I’m a sight-fisherman,” Bonds said. “But I think a lot of these guys had a lot more fish around than I did.”

When he did find the right ones, Bond put a Strike King Rage Bug to work, landing a 15-pound daily average and a check for $4,000.