Top 10 Patterns from the Harris Chain 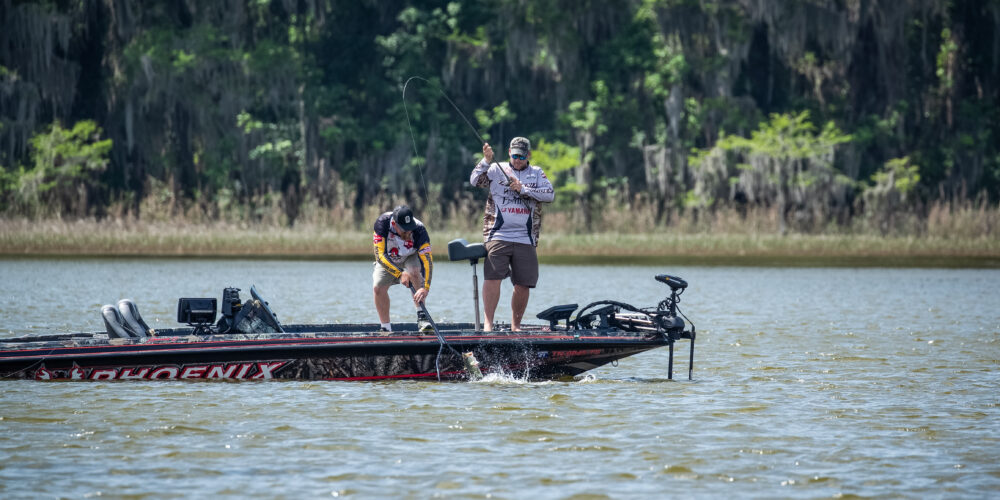 Postspawn patterns were a common theme at the Toyota Series presented by A.R.E. on the Harris Chain. While some pros said a few bass were still spawning, it seemed that the bulk of the chain’s fish were recuperating in offshore grass beds and putting on the feedbag.

Jordan Thompkins won the event using a Rapala DT 10, a jerkbait and a vibrating jig in postspawn locations. Behind him, a vibrating jig and some kind of swimming worm dominated the Top 10 as postspawn bass were filling their gullets with shad and needlefish.

Here’s a look at how the rest of the Top 10 got it done in the second Southern Division event of the season.

After catching 12 pounds, 10 ounces on the first day, Willy Dennison turned up the heat on the final two days, weighing in 19-14 on day two and an even 20 pounds on day three. In addition, all of Dennison’s co-anglers had big limits, including the co-angler winner, John Stahl, who caught 20-4 with Dennison on the last day.

Dennison was one of the few pros who said he found a definitive shad spawn going on in Lake Harris in hydrilla growing out to 12 feet of water.

“The shad were spawning in the tops of that grass,” Dennison says. “It happened every morning and lasted until about 10 o’clock – after that, it went dead. The bass we caught were spitting up shad.”

“The ½-ounce was too heavy and would bog down in the grass too much,” he says. “But the 3/8-ounce would ride up a little higher over that grass.”

Once Dennison caught a limit and the shad spawn bite fizzled, he switched gears to cull up by punching a 1-ounce Oldham Jig with a Berkley PowerBait Pit Boss through the thicker canopies.

Steve Eastman spent much of his week in Lake Dora, bouncing back and forth between grass flats and key fish attractors.

When fishing the grass he opted to slow roll a white ½-ounce Z-Man/Evergreen ChatterBait Jack Hammer paired with a Zoom Super Fluke. When he needled the fish attractors, he preferred a Bitter’s Mega Sling topped with a 3/8-ounce weight.

While most of the Top 10 believed their fish were postspawn, Michael Conley was one of the few who found fish to be in the middle of the spawning phase.

“I found a sand bar in about 8 feet of water surrounded by hydrilla,” Conley says. “The bar was only about 30 yards wide, but it was full of beds with bass on them. I could see the beds and bass on Panoptix. These new electronics are truly amazing in terms of the detail they show.”

Conley made it clear that he was not “sight fishing” individual fish with the Panoptix, but rather seeing the fish were indeed guarding beds and then backing off and fan casting the bar with a  Z-Man/Evergreen ChatterBait Jack Hammer.

“I was using 3/4- and 1-ounce ChatterBaits, rolling them across the sandbar in a reel and drop fashion,” Conley details. “I was trying to get the ChatterBait to fall right in front of the fish to provoke a pure reactionary strike. That’s why I was using the heavier weighted baits to get that fall to just drop right in their beds.”

Conley fished the baits on a 7-6 Denali Lithium Series rod teamed with a 8.3:1-gear ratio Lew’s to help with his technique.

Jeff Harper scored a fifth-place finish fishing offshore hydrilla and brush piles in 5 to 10 feet across Lake Harris. Depending on the depth and cover, he rotated between ChatterBaits, swimbaits and lipless rattle baits.

“The key for me this week was all about boat position,” Harper says. “I had to make the exact right cast on my spots to get bit and I couldn’t do that without the precision positioning of Power-Poles and the Spot-Lock on that Ultrex. To be able to hold my exact spot like that, especially in the wind we had the third day, those are amazing tools. Also, I’m a big believer in the HydroWave. I think it helps pull fish towards the boat, especially in these kind of lakes.”

6. One Lure for Lesesne

Destin Lesesne fished both Griffin and Harris during the week, but no matter which one he went to, he used just one lure: a 4.8-inch Keitech Swing Impact FAT fastened to a ¼-ounce Owner Flashy Swimmer.

“I mostly fished the mouths of spawning bays,” Lesesne says. “Most of the fish I caught were skinny, postspawn fish, but two of them looked more like prespawn fish that had not laid out yet.”

One of Lesesne’s key places was a hard line of hydrilla in about 6-1/2 feet of water.

“I would slow roll the swimbait down through the hydrilla on that hardline,” he adds. “Any cuts or holes in that grass were key places for a bite.”

Lance Oligschlaeger had never been to the Harris Chain before, so he decided to put all his eggs in the Lake Harris basket.

“I had three days of practice and I spent it all in Lake Harris,” he says. “The first two days I just pretty much just graphed, looking for isolated offshore grass that might be a little more overlooked. I ended up finding one stretch of hydrilla about 75 yards long that was far on the outside of some community areas. I could tell from my Garmins that it was a good, healthy grade of grass and it had bait activity all up on top of it.”

Oligschlaeger says there was not necessarily a shad spawn happening in his area, but there was a lot of visible shad and needlefish activity going on. The grass was about 10 feet deep, but the bass were positioned in the tops of the grass ambushing bait. His primary lures for seining the grass tops were two different Z-Man/Evergreen ChatterBait Jack Hammers: one was 3/8-ounce with a Yamamoto Zako and the other was ½-ounce with a Strike King Blade Minnow. He caught some fish on a Zoom Magnum Ultravibe Speed Worm as well.

Nathan Thomas spent most of his tournament time in Lake Griffin, jumping back and forth between a couple of offshore sweet spots.

“I was fishing offshore grass in about 5 to 7 feet of water,” Thomas says. “One of the spots had just a little bit of shell on it, like a rough spot. It was a tiny spot, but once I got lined up on it, I poled down and made that same cast for hours. In fact, the first day I poled down on that spot and never moved. I didn’t even use my trolling motor that day.”

When fishing offshore, Thomas relied on a Zoom Ultravibe Speed Worm and a a Z-Man/Evergreen ChatterBait Jack Hammer Stealth Blade with a Gambler Little EZ

One Day 2, he also punched up a 6-pounder on a Gambler BB Cricket under a 2-ounce Jethro Baits tungsten weight.

Jacob Walker sacrificed a lot of fishing time to run to Lake Apopka each day but made it pay off with a Top-10 finish. He kept his fishing business simple in Apopka, casting a swimming worm to scattered vegetation and then punching a NetBait Paca Slim on a 1 3/4-ounce tungsten to isolated mats. He averaged 16 pounds a day the first two days, but the big winds on the final day cratered his area.

Christian Greico made the long run to Lake Apopka each day as well and the journey turned out to be quite profitable for him. On Day 1, he caught the biggest bass of the event weighing in at 9 pounds, 12 ounces. As fate would have it, the giant bass had a tag in it worth $5,000. The bass was tagged back in February as part of a cooperative effort between the Florida Fish and Wildlife Conservation Commission and the Friends of Lake Apopka to improve the fishing in the lake. When it was tagged and released, it weighed 12 pounds. After the rigors of the spawn she was down to 9 pounds, 12 ounces, but still took Big Bass honors on Day 1. Greico caught the profitable bass on a creature-style plastic bait with ¾-ounce tungsten weight, sprayed liberally with Tightlines UV Fish Bomb Scent garlic scent.