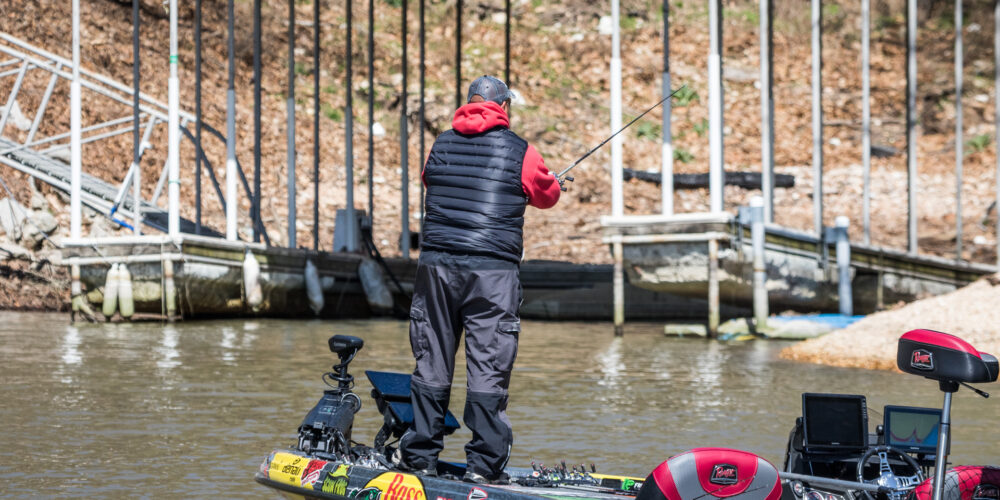 With over 40 bags topping the 15-pound mark, it’s safe to say they’re biting on Grand Lake for the Toyota Series Presented by A.R.E. Plains Division event. Bass are wanting to flood the bank to spawn and the majority of the top pros are catching fish that are on the verge of settling down and getting on beds.

Leading the charge is Eric Olliverson, who caught 21 pounds, 12 ounces to set the pace in the second event of the Plains Division season, which is presented by Fenwick. Behind him is a stacked field of Grand Lake standouts who are chomping at the bit to get back out on the water.

James Watson has some solid history on Grand in the spring and he’s leaning on that to keep him in the hunt for his second MLF win.

“I’m feeling it this week,” Watson says. “I had a good practice, I sampled a lot of different stuff and this is my favorite place in April. It’s the best lake to be at other than Cumberland. It’s a shallow fishery and I like to fish shallow. You can spinnerbait, you can pitch baits to the banks, you can throw a crankbait and throw anything shallow. I’ve had good success here in the past and I want to keep it rolling.”

While catching a good bag on Grand can often be a case of quality over quantity when it comes to bites, Watson isn’t having trouble catching bass.

“I went through a bunch of bass today to get all of those,” he says. “My big fish was probably my seventh keeper bite of the day. But I had three others I weighed that I caught in the last hour this afternoon.

“I think tomorrow will be a real good day. I think there will be more fish caught tomorrow because a lot of the bass I’m catching want to get up there to spawn, but they’re not doing it yet. Every bass in this lake is getting ready to charge the bank. It’s fixing to happen.”

There’s no doubting the abundance of 4- and 5-pounders in Grand Lake, but Watson’s 8-pound kicker was certainly part of the recipe for success on this pond. Getting multiple bites that push 5 pounds goes a long way and having confidence in what you’re doing can be part of that. For Watson, he credits a Trophy Bass Company spinnerbait to some of his success – it caught the kicker today.

With as much history as Watson has on this lake, he’s figuring he’ll have to keep digging in the memory book for places to fish tomorrow.

“I fished in front of some and fished behind some guys today,” he says. “You’ve just got to get your confidence baits and cover water. I got a lot of water and I’ll just fish history. I’ll run new water tomorrow, but it’s water I’ve hit in the past.”

Limited experience on Grand isn’t hindering Blain Jackson so far this week. Today’s catch was the first 20-pound bag he’s weighed in an event and there’s no better time to do it than at a Toyota Series tournament.

“I believe this is my third time here,” Blain says of his Grand Lake experience. “I came up Sunday night after Easter with the family. I figured a little out on Monday. I came back out on Tuesday and got a few more bites and didn’t fish yesterday because I was worried about the storms rolling in.

“I went out today and actually had to do something different than I did in practice, but I had some decent fish found. I had to grind it out. If it wasn’t for that late flight today I’d have been in trouble.”

Many anglers reported a decent morning bite today, however, Jackson wasn’t one of them. Being an early boat tomorrow, he’s hoping to make something work. Still, his lack of experience on this lake could bite him if his Plan A doesn’t work out.

“I have one area and I’m afraid it’ll dry up,” he says. “I don’t have too many people around me, but it fishes real small. We’ll find out tomorrow if it holds up. I did catch a few that helped me this afternoon running new areas. There’s certain things I’m looking for and when I find it, they’re almost certainly there.”

Jeremy Lawyer has no shortage of knowledge on Grand Lake, so it’s not surprising to see the Tackle Warehouse Pro Circuit pro in the mix atop the leaderboard.

Things started out a bit slow for the Missouri pro, but the afternoon bite helped boost his bag.

“I caught my two biggest ones in the last hour of the day,” Lawyer says. “I caught them on back-to-back casts off the same piece of structure. But I don’t think they’re spawning. I think they just came in to look around and are staging to spawn. I haven’t caught a fish this week that I feel is spawning. I haven’t seen one cruising or hold its tail up or anything.”

Lawyer also falls into the category of pros who haven’t had issues catching keepers, yet size has been the limiting factor – until today.

“I’ve been catching a lot of keepers, but it’s hard to catch one over 4 pounds,” he says. “I had like 15 keepers today and today I caught that 6-13 and a 4-something to go with it.

“But I’m not really dialed in like I was when I won the FLW Tour here in 2019. I knew where I was going to get a bite, if I got a bite back then. Now, I’m just winging it,” says Lawyer. “My co-angler caught 15 pounds, which shows that I’m not very dialed in. You might catch one off a dock corner or random bank and that’s what the problem is. I feel like I know a way to catch some keepers and get rolling and then I can go try for bigguns.”

Having a place on Grand Lake certainly gives time for Billy Lemon to do his homework on this pond. Sitting in fifth, things are off to a good start, but could have been a lot better.

Even with losing two good fish, Lemon says his day went about as planned.

“The fish have been bunching up and every day since I started practice it’s been getting better and better,” he says. “I got what I had pretty quick this morning, probably in the first hour. Then I left the area and probably should have stayed, but I went bouncing around and everywhere we went we caught fish. It’s a pattern deal. I’m fishing 63- to 65-degree water.

“If I can get on the spot I started on this morning I feel pretty good. If I can’t get in there, I think I can catch a limit, I just don’t know how big they’ll be.”