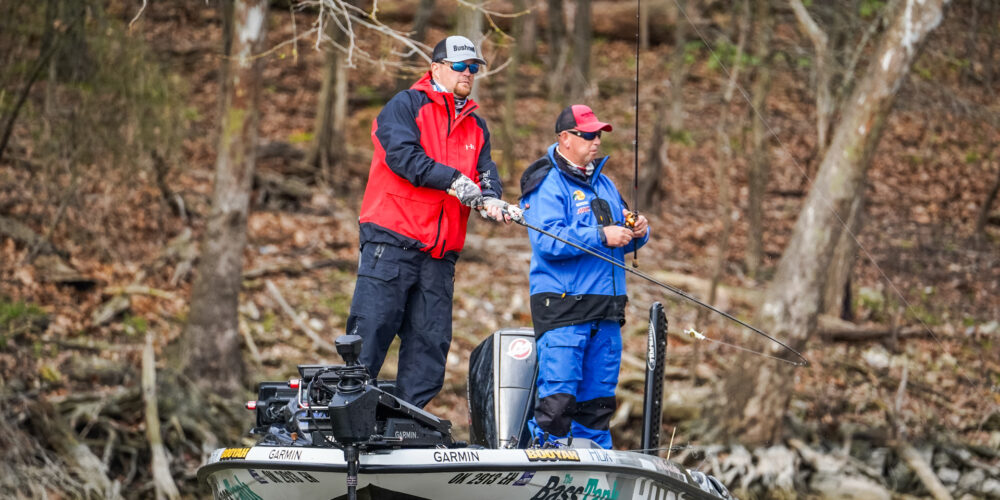 The rhetoric this week on Grand Lake for the Toyota Series Presented by A.R.E. event was that there are piles of bass waiting to spawn.  So far, so good – almost every bass that has come across the weigh-in stage in the Plains Division tournament presented by Fenwick has been plump with eggs and as healthy as can be. The only issue, however, is that when it comes to getting them to bite, they’re a bit stingy.

Too much wind. Not enough wind. Clouds, sun or the falling water. All of these have been factors to a degree, but the top 10 pros are still getting it done.

Andy Newcomb took the lead with 37 pounds, 2 ounces, but behind him is a pack of Grand Lake hammers waiting to strike. Under 4 pounds separates first from 10th, so you can expect tomorrow’s final round to be a shootout.

Chris Jones has seen his fair share of success on Grand over the years, including his sole Toyota Series win here back in 2018. So, to see him hot on the heels of another win isn’t much of a surprise.

While many anglers were scratching their heads as to why the fish didn’t bite as good on Day 2, Jones seems to think a combination of factors are to blame.

“I think we need the sun,” he says. “Every day in practice when the sun was shining you could catch them. Those big girls are wanting the sun to get up there and lay in it. We also didn’t have much wind when the sun did come out today and I had several fish come up and just slap at it.

“They’re trying to get on beds, the water is falling and there’s just a lot of scenarios working against us trying to catch prespawners.”

With the lack of wind, many pros who leaned on a spinnerbait or vibrating jig saw less success today. Jones falls in that category, yet opted to force the bite rather than adapt.

“I stuck with what I’m doing, I’m hard-headed,” he jokes. “I knew how quick my day would turn around if they started biting and that little thunderstorm popped up at 2 o’clock and I caught four keepers in 20 minutes. They’re there, they’re just not wanting to bite. It’s not like they’re swimming from the main lake. They’re just not set up to where they’re feeding when we fish through.”

Having fished just two other Toyota Series events as a pro, Joey Cantrell made his first Top 10 thanks to a 19-7 bag on Day 2.

Like Jones, Cantrell also stuck to his guns and fished the same way he did on Day 1, but finally bumped into quality bites.

“I did the same thing as I did yesterday, but I caught a lot more keepers yesterday,” Cantrell says. “Today, the quality was just better. Those fish are sliding up and they bit today for me. I’m fortunate.

“I caught four that I weighed in the first hour and a half. Boats had been down those stretches before and I don’t know what I’m doing different, but I feel comfortable going behind somebody and fishing. I never avoided an area because a boat had gone through there.”

After his bite slowed some midday, Cantrell tried some different things in order to trigger a bite. With nothing to show for it, he went back to his bread and butter.

“I immediately caught a 14 ½-incher to give me my fifth fish doing what I’ve been doing,” he says. “Then 20 minutes later I caught a 4 and a couple more that didn’t help, but I’d love to have tomorrow.

“I had to change colors a little bit, but I’ve thrown three baits over both days. Tomorrow, I’ll live and die by it I guess.”

After leading on Day 1 with 21-12, Eric Olliverson scratched together 13-8 to stay in contention for the win. With different weather, Olliverson knew things felt different on Day 2 and he knew he’d have to make some changes.

“This afternoon I caught them all on a squarebill,” Olliverson says. “They’re starting to show up on any turn or transition and even some of the flat mud banks in the backs of pockets. They were shallow this afternoon.

“I had to go further back today, and I was checking that the last two days, but this afternoon they were back there. I actually saw some beds, too.”

Even though his weight slipped, Olliverson is still pleased with how his day went, despite losing some key fish.

“I lost two fish over 4 pounds today,” he says. “I’m definitely around them and I have total confidence that I’m in the right area to win this thing.”

There’s no better way to make the second Top 10 in your MLF career than to drop the biggest bag of the event like Kyle Minke did on Day 2. Weighing 23-9, Minke jumped from 98th to fifth thanks to some Grand Lake gold.

“I’ve never been here before and I felt like we (he and co-angler travel partner John Hoyer) had a good practice,” Minke says. “It feels awesome to catch that bag today. I’m excited and looking forward to tomorrow.”

The wind on Day 1 certainly helped the bite for some pros, but not Minke. He ran the same program he ran on Day 1, yet got the results he was looking for.

“The wind hurt me [yesterday],” says Minke. “It was blowing into my stuff and I think they were there but didn’t bite because of the wind. I fished the same areas with the same baits today.”

Catching quality and quantity aren’t usually a combination that go together on Grand. However, Minke says he and his Strike King co-angler Dennis Young, who caught 20 pounds today, didn’t have an issue catching plenty of good ones.

“We caught a lot, and not like a lot of little ones,” Minke says. “They were mostly all 3-plus-pounders. I culled probably five or six times today.”

Minke was reluctant to dive into is pattern more – and for good reason – yet says that he’s fishing around other anglers, but doing something different. Tomorrow, with just 10 pros on the lake, Minke is hopeful he can keep the train rolling.

“I think I can do it again, but this weather coming in might change things,” he says of the overnight storms and cooler weather expected to roll in. “I think I got a good idea of what else I can do, but I think we can catch them tomorrow again for sure.”