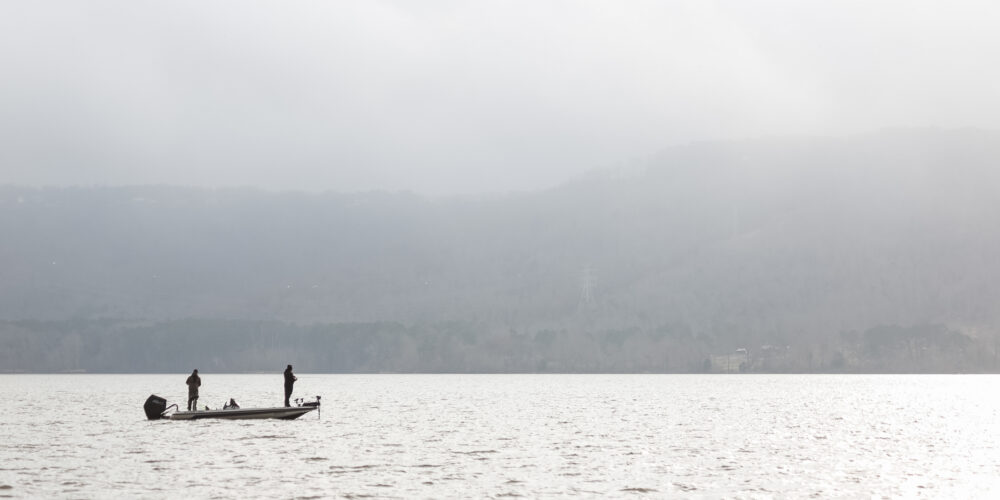 SCOTTSBORO, Ala. – There are few secrets on Lake Guntersville, and on Day 1 of the Toyota Series Presented by A.R.E. Central Division opener, the worst-kept secret about Guntersville came to light: It’s a really, really good bass fishery.

Every pro in the Top 10 surpassed the 20-pound mark on Tuesday, including Day 1 leader Nathan Brewer, who went off the beaten path to weigh more than 28 pounds of smallmouth. You can read more about his pattern here.

For everyone else near the top of the leaderboard, Guntersville proper churned out masses of big largemouth via various tried-and-true techniques and baits. Here’s a closer look at how the rest of the top pros got the job done on Day 1.

Though Guntersville’s grass isn’t what it used to be – eelgrass has taken over as the dominant aquatic vegetation and pushed out a lot of the hydrilla and milfoil – the sparse population of formerly dominant grasses is sometimes a boon for anglers who go out in search of it. Count Austin Swindle among them.

Swindle based his entire Day 1 pattern on finding scattered hydrilla patches in deep (10 to 13 feet) water, primarily relying on a jerkbait to catch his fish. The one problem with his pattern is that it required a ton of running and gunning.

“I bounced around to probably 30 different spots and hit as many high-percentage areas as I could and got the bites I needed to get,” he said of his areas. “You pull up, try to catch one or two and then you pull the trolling motor up and go to the next spot.”

It worked so well for Swindle that by 11:30, he had all of his 24-12 and decided to allow his co-angler, Dewayne Drummonds, to take advantage of his spots while also spending some time idling around looking for more high-percentage spots he can hit on Day 2 in search of another monster bag.

After 16 years as a firefighter, Derik Hudson quit his job in November to pursue a career as a professional angler. So far, so good.

Hudson, who calls Virginia home, hasn’t fished Guntersville much – only once, last season, to start the 2021 Central Division schedule – but he’s exceedingly comfortable on a fishery now inundated with eelgrass.

“We have a lot of highland reservoirs in Virginia,” he said. “The reason this lake really suits me well is because I’m very comfortable fishing grass. My personal best, a 13-10, came from a lake with a lot of eelgrass. Same recipe, basically. I feel right at home here.”

To catch his limit fairly early, Hudson turned to what nearly everyone does on Guntersville: moving baits around grass. With a limit secured, he opted for an umbrella rig fished around riprap near bridges to cull up to 24-11 for the day.

“This is my first event trying to [fish] professionally and this is a great way to start,” he added. “The Lord has definitely blessed me.”

You won’t get a whole lot out of Dustin Evans if you ask him how he caught his fish on Day 1. After all, he caught almost 24 pounds of Guntersville bass, and he did it doing “a secret Guntersville trick” he learned from a buddy (who is also fishing the tournament) during practice.

“I kept that secret, went with it today and I got a bite here and a bite there and no real discernible pattern except that once you catch a fish, go somewhere else,” he said.

When pressed on his tactics, he only had this to say: “They were in the water and I hooked them in the mouth.”

Evans did go on to say that the fish he was targeting on Day 1 bit “light,” and that a lot of times he’d have to set the hook when it felt like he was just dragging through grass in order to hook a biting bass.

We’ll learn more about Evans’ pattern if he manages to keep his standing in the Top 25 after tomorrow. For now, he’ll just keep everyone guessing.

“I made the right decisions,” he said. “You could say it was pure luck, but the bait and the retrieve were vital.”

If you’re trying to replicate Hunter Eubanks’ Day 1 pattern to catch 23-13 on Guntersville, good luck. You might need a few days to hit enough docks.

Eubanks spent his time on Day 1 flipping docks with a jig, but it was one dock in particular that really stood out.

“In practice I had bites skipping docks with a jig,” he said. “I wasn’t really sure if there would be more there; I swam a lot of them off. I went back today and caught six off one dock.”

While Eubanks caught other fish off other docks, it wasn’t all about the structure for the Inman, S.C., pro. He caught several fish – including an 8-7 – in scattered patches of eelgrass. Now he’s just hoping the warming trend continues and fish keep moving up to the docks and scattered grass.

“If it stays warm, there’ll be more moving in there and it’ll get real good, I think,” he said. “These fish move so much, though, I might not even catch one.”