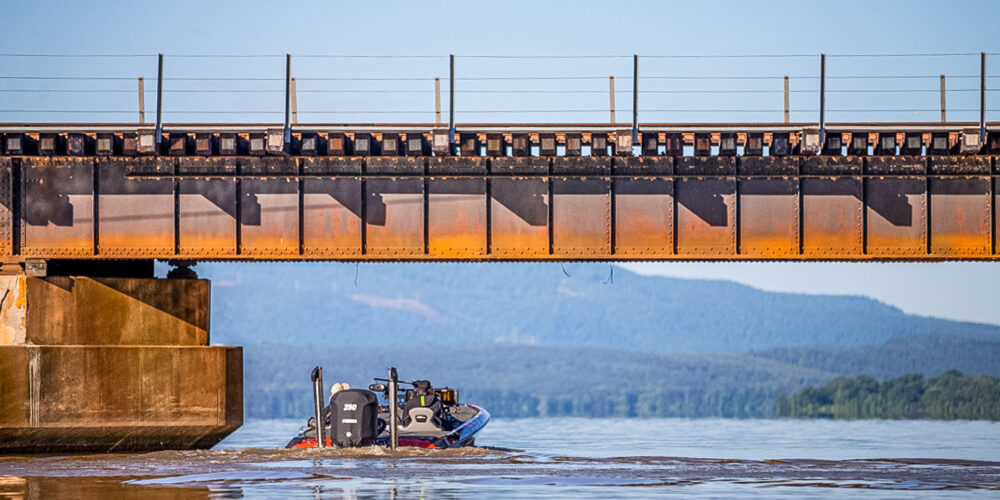 Dock talk can be hit or miss, but it’s definitely been a hit thus far at Lake Dardanelle.

The tough bite has certainly held true for the Toyota Series Presented by A.R.E. Plains Division finale. With that, many pros said there would be one or two big bags before the weights dropped hard. Again, spot-on, as Chip Hawkins’ 18-pound, 5-ounce bag was more than 2 pounds clear of second and almost 4 pounds clear of fifth.

Yet, with how fickle this lake can be, anyone could easily catch Hawkins, especially with the confidence some of the guys chasing him possess.

There may be no one who wants to win this event more than Zach King. Having 10 Top 10s in Toyota Series and BFL events on Dardanelle without a victory will do that.

“I want to win one really really bad,” says King. “It’s time. Time to get the monkey off my back. I’m ready.”

Not only is he ready, he’s once again in position.

While he doesn’t really have a pattern, he does like the area he’s in, as he stopped on six places and caught keepers on all of them, probably catching “at least a dozen today.” In those areas he caught some on a frog, a jig and a spinnerbait, especially once the sun came out. And water clarity was a non-factor, as he admits he caught some fish in water with only an inch of visibility.

“It’s just a lot of junk fishing,” says King. “I figured that’s the way this tournament will be won. I don’t think there’s going to be a pattern to it. So, I’m hoping to catch 13 pounds to stay in it tomorrow, and I should have a chance because I have some areas I didn’t hit and the ones I did I didn’t stay or beat on. That makes me feel good.”

King didn’t figure anyone would win on a specific pattern. Kirk Smith is out to prove him wrong.

“It’s a location thing,” says Smith of his pattern. “Most everyone is overlooking it. I don’t know if I got lucky or what, but I found it in practice. Once I found it, it’s just been a matter of finding more of it.”

Obviously, he’s tight-lipped on what “it” is, but what really has him excited is that he fine-tuned it today.

“Today, my starting spot was full of 14 ½-inchers,” says Smith, who caught more than a dozen keepers. “As I started to progress, I started to fine-tune in on the big ones. After that, every fish I caught was 3-pounds plus. I just had to fish a little bit different, a little slower, a little more detailed. That made all the difference today. I feel really good about it going into tomorrow.”

Lake Dardanelle is loaded with vegetation, and there were no shortage of anglers flipping it. No one did it better than BJ Miller, though, and there’s a reason behind it.

“I’m fishing around a lot of people who are all flipping, but I’m not seeing them catch many fish,” says Miller. “If I had to guess why, it’s because they’re doing a more finesse approach. I’m not. I’m throwing the biggest, heaviest, most obnoxious stuff that’s harder to ignore.”

He came across the pattern in practice, and thus far it’s holding true, as he caught seven keepers. However, he’s also mixing in a squarebill at times, and doing so broke his heart today.

“Right at the end of the day, I lost a 6-pounder on that squarebill,” says Miller. “There was nothing I could do. She jumped and just threw it, but I would’ve loved to have had her.”

Falling water killed many pros’ hopes today. It may actually be the biggest advantage for Shonn Goodwin.

Despite a tough practice, yesterday afternoon he got three bites doing the same thing in three different areas.

“So, that clued me in to what I felt I needed to be doing,” says Goodwin. “I went and did that today and grinded out seven keepers.”

Where the advantage comes in is the fact that he’s keying on cover in the right depth. It can’t be too deep, which is farther up the river, as the lake level up there is actually higher than the lower end, which is too shallow.

“So, it’s just a matter of keying on the area of the lake where the cover is in the right depth,” says Goodwin. “If the water keeps dropping, it won’t hurt because I can just go further up and keep moving with the water.”