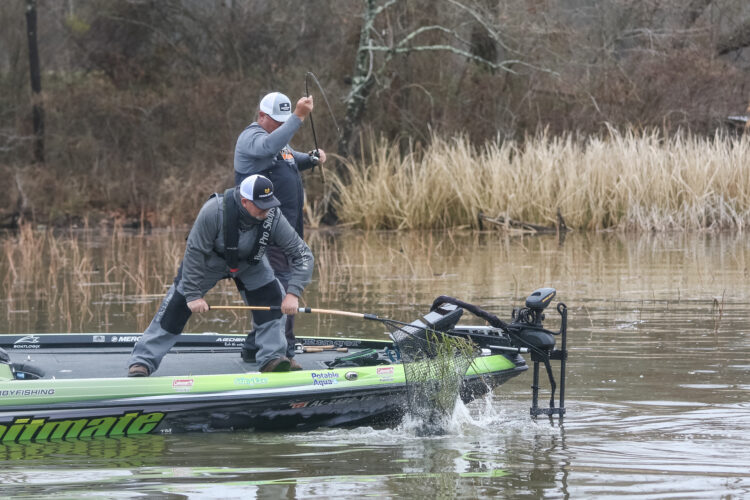 SCOTTSBORO, Ala. – A fog delay didn’t put much of a damper on Day 2 of the Toyota Series Presented by A.R.E. Central Division opener on Lake Guntersville. While some anglers missed out on their early morning bite, weights across the board were still pretty exceptional on Wednesday, setting up a heavyweight finish on Championship Thursday.

Apart from two-day leader Nathan Brewer and his unique spot and quarry (read more about that here), just about everyone who made the final day spent the first two days of the tournament leaning heavily on Guntersville staples.

Here’s a look at how the Top 5 pros caught their fish on Day 2.

Derik Hudson ran a two-pronged program on Day 1, first winding a lipless crankbait around grass before moving to riprap around bridges to target kicker fish with an umbrella rig. That program never really came together on Day 2, though, as the umbrella rig bite stalled out and Hudson had to call an audible.

Still, the Concord, Virginia, pro had 17 pounds within the first hour of the day winding grass, so having to find a tertiary pattern didn’t make or break his day. Hudson found what he was looking for with a dock bite, eventually making a nice cull later in the day flipping a wacky-rigged stick bait under docks.

The best part of Hudson’s plan of attack through two days is that it’s not dependent on the early morning bite (which many anglers lost on Wednesday due to the fog delay).

“It (the delay) actually helped me because I was a later flight, so it gave me an hour and a half more because we blasted off about 30 minutes into takeoff,” he said. “The extra time allowed me to practice a little more today knowing I have to do it again tomorrow.”

Unlike Hudson, Bo Collins’ Day 2 bite was severely affected by the fog delay. Like Hudson, though, Collins’ backup plan ended up coming through in the clutch.

“I caught my fish yesterday pretty early, and I only caught three off it this morning,” he said. “I started running my backup plan, and everything worked out. My backup plan was better than yesterday.”

Collins chose to not divulge much about his program, but he did say he’s sticking with some tried-and-true Guntersville tactics predicated on winding grass. That’ll be the plan again tomorrow as long as wind and rain don’t get in the way.

“I’m going to start the same way [Thursday]. A lot of it will depend on what the weather does tonight and water levels in the morning and really wind direction tomorrow; I think it all is a big factor now as far as what I’m doing. I’m just trying to adjust with that and go from there.”

For Kyle Palmer, success this week has been all about two well-known Guntersville staples: a lipless crankbait and an umbrella rig.

On Day 1, Palmer caught a few quality keepers on the umbrella rig early before switching to a lipless crankbait (and eventually landing an 8-7 on it). On Day 2, he couldn’t get the rig bite to fire and instead spent all his time winding grass in 10 to 12 areas with the lipless.

What’s most impressive about Palmer’s Day 2 total (18-2) is that he caught his fish without a working motor for much of the day after it broke down around noon, which he says cost him about 2 1/2 hours of fishing. Paired with the fog delay, that’s a lot of damage done in a very short period of time.

Hailing from Winchester, Tennessee (about an hour up the road), Palmer says he should be able to borrow his dad’s boat for Championship Thursday.

Starting the day late was almost disastrous for Bob Blackerby on Wednesday. He caught all his fish before 8:30 on Tuesday, but on Day 2, he was still sitting at the takeoff ramp at 8:30.

Luckily, Blackerby kept his eyes open while running around looking for some new stuff.

“We had an enormous amount of rain overnight,” he said. “Just by luck, running around I found a wash with a lot of water running in and caught all my fish off it in one place.”

Blackerby plans to still try to get on his early morning bite tomorrow – winding a ChatterBait around “super shallow” grass – but he’s pretty confident he can still catch some fish at that run-in if there’s still some water in it.

“I don’t know how much that wash will be running tomorrow,” he said. “I feel confident I can go there and finish out a limit or catch a limit. I’m just going to put my head down and go fishing.

“It’s always fun to get to fish the last day. There’s a lot of great guys here ahead of me with some really strong weights. I don’t know if I can catch them, but I’ll give it my all.”