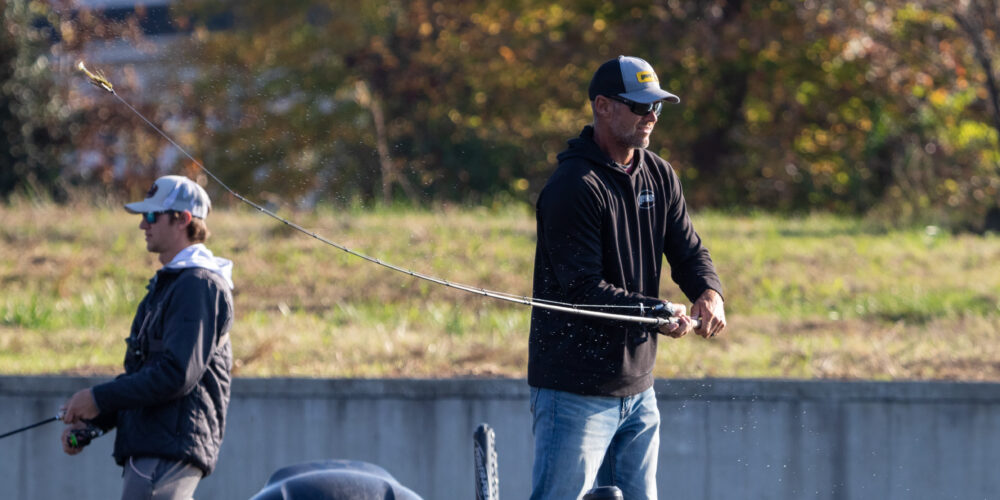 GUNTERSVILLE, Ala. – If you came to Lake Guntersville looking for a fall flipping and frogging beatdown, there’s a decent chance you left disappointed. With Kyle Hall rolling into the lead of the Toyota Series Championship Presented by A.R.E., forward-facing sonar is threatening to take down another W on the year, and nobody else in the top five even picked up a flipping stick on Day 2.

With that said, just because heavy braid isn’t the name of the game doesn’t mean things are boring. The best pros have cobbled together several pretty cool ways to catch ‘em, and the race for $200,000 is hot.

Dropping from first to second, Todd Castledine scrounged up 17 pounds, 1 ounce on Day 2 and is running a fascinating dock and wolfpack pattern up shallow.

“They were wolfpacking on me, and they’re not anymore,” the lanky Texan said. “I figured out where they go, and now they’re not even there. They’re not in any of those places, they totally left all of my places. Where there used to be 20, now there’s like one. They never came up busting, they never chased anything, there was like zero activity all day long.”

Castledine got off to an auspicious start, but then hit a mega-lull.

“I thought it was going to be good,” he said. “The first place I pulled up, I didn’t even fish yesterday and I caught one right off the bat. Then, I caught one (around 9 a.m.) and then I didn’t catch one for three or four hours.”

Throwing a swimbait, a jig and a frog, Castledine has an interesting mix on deck and he’s in an intriguing position. Having caught the biggest bag of the event and seen the fish to win on Day 1, he nonetheless had a very tough Day 2.

“If I hadn’t fished until 4:30, I probably make the cut, but I might not have had a limit,” he said. “I might have had a limit by 3, maybe. So, I don’t know; I’m not feeling great, to be honest. But, then I saw how bad it was. Look at Tristan McCormick, he freaking smashed on them and he had two. Dakota Ebare had two. Like, all the guys that had big bags did bad, so maybe my seven or eight bites weren’t bad.”

Staying put in third place after both days, Arkansas pro Scout Echols caught 16-14 on Day 2 to maintain his position on an overall tougher day.

For Echols, the afternoon bite saved his bacon in a big way.

“I had a terrible practice, and in two or three of my areas my fish moved, and I didn’t have a fish until 12 o’clock,” he said. “I kept hitting one area over and over, and finally got them to bite. I think some bigger fish are moving into one of my areas – there’s a bunch there, but you need to weed through them.”

Fishing a jerkbait on grass lines, Echols mixed it up a bit on the first day, but committed to jerking on Day 2. He was paid off with nearly 10 keepers for his efforts, though he’s not feeling sure about Day 3.

“I’m a little nervous, I’m just going to go fish, and hopefully run into them,” Echols said. “I don’t have anything good going, I’m just hoping to run into them.”

As the Florida pro in the top five, you’d think Matt Wieteha got the mat bite dialed in. But, you’d be wrong because his 19-pound and 17-11 bags have all come off docks, so far.

“I started on a spot I practiced on and never got a bite, but it fit what I was doing,” Wieteha said. “I pulled up there and caught one almost 4(-pounder). Then I went to what I considered my primary stuff, which is up north past Goose Pond, and I caught a 4-pounder on a ChatterBait right off the bat. Then I ran new water, and ended up catching two more 3-pounders.”

Fishing skipping docks and fishing around them with a vibrating jig and a Molix Kento Jig with a Gambler Burner Craw trailer, Wieteha is leaning into one of his signature strengths. With Castledine also doing a lot of damage on docks, it looks like he has a viable shot at the win.

“It’s really a pattern, I just have to run a lot of new stuff,” Wieteha said. “I ran water today I ran yesterday, and I was only able to scrap one bite out of it. It’s very volatile, but I think I’m somewhat on top of it.”

The big riser of the day, Marshall Robinson waylaid 19-3 to rocket up the leaderboard after catching just 15-1 on Day 1. The son of Bass Pro Tour pro Marty Robinson, it looks like the younger Robinson has a good dose of his dad’s fishing talent.

That changed when he started to make some adjustments.

“So, I started to hit some new stuff, and I ended up running into a big group of them and caught almost all of my fish off one spot,” Robinson said. “So, hopefully, they don’t move much, and I can find them again and catch them.”

Fishing in grass, or at least near grass, Robinson thinks he’s located some fish that have eased away from the pressure.

“You’ve got a lot of grass here obviously; and a lot of these fish, when they get beat on, they slide to that outer edge,” he said. “They act a little different with all the pressure. I can see some of them (on LiveScope), and you’ll catch a few random ones. It’s a little different, and a little deeper. That 3- to 5-foot section, that zone gets beat on pretty bad. It seems like out a little deeper is where they want to get to.”

Now, he’s going into the final day with a shot at a truly momentous win considering the volatility of the event so far, and a real chance to get it done.

“I haven’t been fishing the Toyota Series too long, I’m only 19,” he said. “At this point in my career, it would be huge, the biggest thing I’ve ever won. So, hopefully it can happen like that, you never know. I’m just going to go out there tomorrow, and you never know, I might could get it done.”