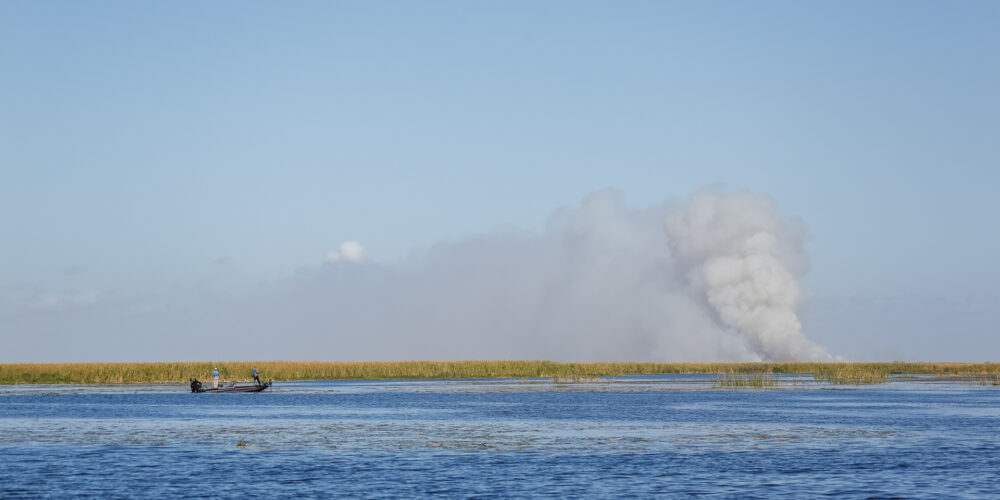 CLEWISTON, Fla. – Day 2 of the Toyota Series Presented by A.R.E. opener on Lake Okeechobee was oddly similar to Day 1. There weren’t a ton of huge bags caught and the big fish haven’t quite showed up yet, but that dam is close to breaking.

Most of the final-day field of 25 pros and 25 Strike King Co-Anglers is singing the same tune: The warming trend is continuing, and before long, the big girls are going to be on beds. As such, the predominant pattern through two days of competition has been predicated on hanging out in spawning areas, flipping and winding for new waves of prespawners working their way shallow to get down to business.

That’s been the focus of tournament leader Brandon Medlock (read more about his pattern here) and most of the remaining field. Here’s a look at how the rest of the Top 5 caught their fish on Day 2.

Palatka, Florida’s Lee Stalvey made his hay on Day 1 sight-fishing big bass on beds, and while he still went out in search of beds today, he caught his limit early with a ChatterBait rod in hand as he moved around from bed to bed.

After losing two 5-pounders he found on beds earlier in the day, Stalvey leaned on winding and eventually dragging a worm to keep adding to his limit, though a lot of those fish he picked off between beds were small, prompting him to abandon that practice for fear of keeping females from moving up into those areas with the bucks gone.

Still, Stalvey managed to weigh in 15-8 and enter Saturday in second place (just an ounce behind Medlock). The good news is, he found a 9-pounder on a bed late in the day on Friday and hopes to catch her to start his Day 3. The better news is that the field is now down to 25 and it’s anyone’s game.

“These guys down here are serious sticks, and what I’m doing is just giving it a shot,” he said. “This lake is going to bust wide open sooner or later, and these guys are going to start bringing in 25-, 30-pound bags. But I could do that also. I just want to have a shot at it tomorrow.”

Stalvey might also have some good karma in his corner after helping his co-angler, Mark Taylor, catch his first-ever pair of bed fish to fill out his limit from the back of the boat earlier in the day.

Christian Greico benefited from a flurry of fish catches in a short period of time yesterday morning to weigh in his 20-7, but the same quick flash of limit-filling catches never came on Day 2. Instead, he ground it out and slowly added to his bag over the course of the day.

“It was kind of just a slow-and-steady day,” he explained. “I fished some new areas and went to one of my areas I got bit in yesterday. I got a quick limit, but it didn’t weigh too much. I just went to some new water and picked off some good fish, but I had a few I definitely could have gotten rid of.”

Greico is going for broke tomorrow and wants to keep a flipping stick in his hand all day. He plans to fish some of the same water to start the day and then explore some new stuff if he has to.

On Day 1, Willy Dennison relied on the bright sunshine and limited wind to find his fish and make the precise casts needed to get them to bite. Day 2 proved to be tougher on both fronts, though, as wind and overcast skies put a damper on his sight-fishing program.

Dennison only got seven bites all day, landing six of them as the other straightened out his hook. On the bright side, he knows he’s in an area where fish are moving up to spawn. It’s just a matter of trying to make the right presentation.

With hopes of bluebird skies in his head (and knowing that’s an unlikely forecast for Saturday), Dennison plans on “just going fishing.”

“Any time you make a Day 3 you have to feel good about it,” he admitted. “I’m going to go fishing tomorrow, put my head down, grind it out and see where we’re at.”

Day 1 leader Lance Pemble thought he was going to have his area at the south end of Okeechobee all to himself. Instead, after rolling into that area with a late boat draw on Friday morning, he was greeted by five or six boats with anglers who all seemed to be catching fish.

“The fish bit real weird because of electronics and trolling motors and this and that,” he said of the struggle. “We’d have a guy idle through every 10 minutes.”

As a result of the added fishing pressure, Pemble had to make some quick adjustments.

“Yesterday, I was able to catch them flipping, and I think with the added pressure, they didn’t want any part of it,” he added. “We had to finesse them today. We downsized bait, line, fluorocarbon instead of braid, dragging a worm. That’s not what I want to do; I like to flip.”

Pemble thinks the fish are “pulling up hard,” so he might just have a chance to get the flipping stick back out tomorrow with only 25 boats left in the field.

“We might have to mix in some sight-fishing to get a big one,” he added. “We made the top 25 we’ve got to try to win the thing.”