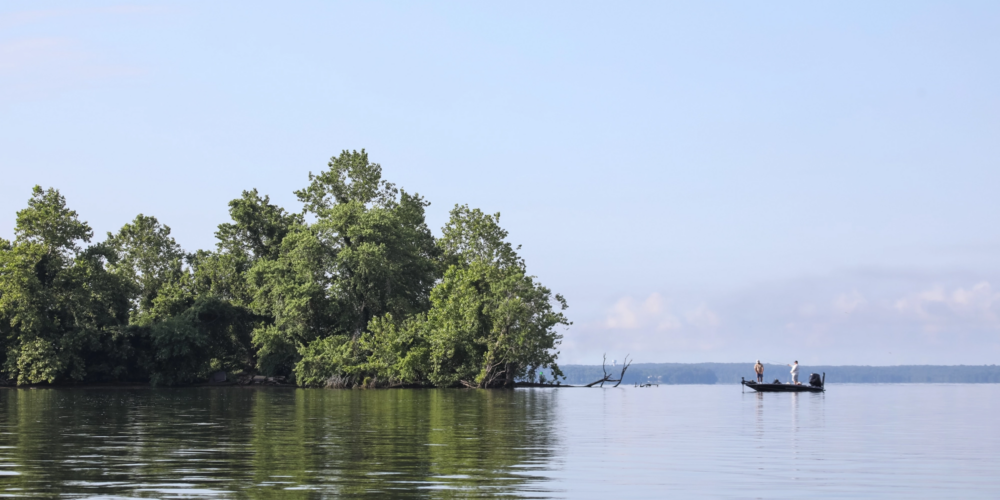 MARBURY, Md. – What goes up must come down, and we’re not just talking about the tides during the Toyota Series Presented by A.R.E. Northern Division event on the Potomac River.

Day 1 saw an absolutely banner day of fishing few fully expected, which of course, mean that Day 2 had to balance it out and be much tougher. Few pros matched their Day 1 weights, let alone exceeded them. Rod Mackinnon III was one of the exceptions with a 20-pound bag, which has him in the lead. But nothing is ever certain on a fishery known for such wild fluctuations.

Mackinnon is not the only angler trying to win from one tiny spot. Problem is, Robert Henderson is already not sure if his will hold up.

“I found an area three weeks ago that’s been holding them,” Henderson said. “It’s just really hard to catch them. It’s a real small area and getting smaller. It started out as a 50-yard circle but its been condensed to 30 yard circle. Plus, it kind of fizzled out this afternoon. So, I’m a little worried about it for tomorrow.”

While there may not be any fish left, it held plenty of solid fish the last two days. The key was catching them, as Henderson says he needs a low tide to be able to see the individual grass clumps that the fish are sitting on. Yesterday’s high tide meant he couldn’t see them and had to blind cast, but today he could and he made quick work of catching his solid bag.

As for tomorrow, the conditions look perfect for him to flip his worm to the grass patches he sees. It’s just a matter of if there are any fish left.

A 5-pounder is a giant kicker on the Potomac River. That makes Marty Robinson’s 7-9 basically a sea beast and true game changer.

“You know, I tried to cull her out, but just didn’t happen,” Robinson joked. “Honestly, that’s the biggest fish I’ve ever caught on the Potomac by far.”

And she certainly made him work for it.

Sitting on four fish at 10:30 a.m., Robinson flipped to a piece of wood – he’s splitting his time 50/50 between fishing grass and wood – and he got a quality bite. Unfortunately, she got hung up on the log and he rushed in to try and get her, figuring she was a 4-pounder. That’s when things went sideways.

“I tried to net her myself, and then when I finally saw her I panicked a little bit,” Robinson said. “I dropped the net in the water when she ran to another log. So, I pulled her back out and my co-angler, Liam Kendra, got up and grabbed the fish for me. He’s one heck of a net man with no net. Though, we then did fish the net back out.”

A couple more solid culls on a “tough day” with that big giant was all Robinson needed to secure his top five, and he’s excited to see if he can’t find another kicker tomorrow to make a run at catching the top two guys.

Gas prices are putting a hurting on most everyone. Wil Dieffenbauch has found a solution – stay super close to takeoff the whole time.

While he looked all over in practice, he says his best bites all came in Mattawoman Creek. Thus, he hasn’t left for two days. So while it’s known where he’ll be tomorrow, he’s not really even sure how he got there.

“I’m fishing the same areas everyone else is fishing,” Dieffenbauch said. “The same grass. I don’t know what I’m doing different. I have a few baits I don’t think anyone is using, but they didn’t play today. Just yesterday. Otherwise, it’s a swim jig and worm. Nothing special.”

Unknowns aside, the pro has been exceptionally consistent and hopes to continue it on the final day.

Seriously, that’s all he’s thrown is frogs the first two days, and he’s caught all his weight from on area within the first 45 minutes of both days before leaving it to not wear out his fish. And considering he’s in the top five, Johnson sees no reason to stop, especially since he figures his spot can produce a 20-pound bag if he lays into them tomorrow.

“I have a lot of catching up to do,” Johnson said. “It will be tough to overcome, but I know my spot can be really good, and I have one other spot I’ve been saving.”